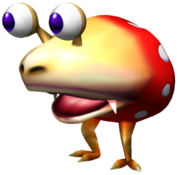 Red Bulborb-Number 5- This creature is very famous in the pikmin world, and is probably one of the first creaures that you will fight. Don't be fooled by the miniture versions of it, as these have just copied the appearance of the Red Bulborb so that they don't get eaten, as a Bulborb would not eat its children( or something that looks like its children). The red bulborbs are not really hard to defeat, when you gain purple pikmin, but they are the top predators on the plains that they dwell, as they can afford to just sleep, without the threat or bigger and badder enemies. If you leave any pikmin behind at the end of the day, you may well see them being eaten by these beasts, and other nocturnal creatures. They can survive in any enviroment, making them successful killers, but of coarse in the Grub-Dog family, there is always something badder and more ferocious than you are, which brings us onto the next Beast... 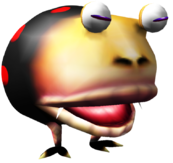 Spotty Bulbear-Number 4- If you thought the Red Bulborb was deadly, then you have yet to see the Spotty Bulbear. Instead of the usual Grub-Dog hunting Technique, sleeping and waiting, this nasty is always on the prowl, patroling the whole area, making it near impossible for an ambush attack on it. Just to make it a bit more fierce, it has backup, its children, and sometimes up to 6 of them follow its parent, making them a force to be reackoned with, eating all the pikmin that the larger Bulbear shakes of his head. They are much more stocky than their cousin the Red Bulborb, and have bigger mouths, making them able to munch through armys in a few bites! You are not even safe in your base as they can follow you their, and if you finally kill him, get him back the the onion fast, as he will regenerate and finish off the fight! The next enemy is not as dangerous as the Bulbear, but can still put up one hell of a fight! 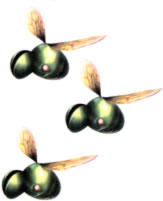