"We've worked hard today, and now it's time for our reward!"

And guess what that reward is? Hmm? Okay, anyone smart would know, and you're about to become smart. Congratulations! My new page! (I'm not the actual Brittany. Shh! Don't tell her!) I've loved pikmin as soon as the game came out, and as soon as I saw it... INSTANT BUY REACTION!

I've loved it some times, and then I felt like I want to murder the game sometimes. Mostly loved it! To all other pikmin fans on this wiki, please, feel welcome. Although, I do bite! (Just kidding! ~♥)

So you know how this works, this is an example on what I'll be doing for a couple of these little add-ons.

Final Boss: Titan Dweevil and the Plasm Wraith. I couldn't decide. They both are evenly tough, and look cool. 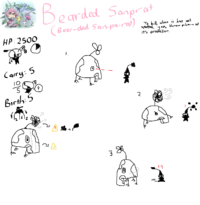 A made-up enemy, the Bearded Sanprat.

both only knocking off a pikmin's flower/bud. One is where it kicks up dirt, sand, or whatever is on the ground and kicks it at the pikmin, which knocks them over and decreases their plant on the top of their head. The other attack is where it blows pikmin away using it's propellor, knocking the pikmin over and decreasing their flower/bud once again.

The Spitter Leaf is an enemy that resembles a leaf with two red beady eyes and six legs, like an insect. It attacks by blowing bubbles that pikmin can fall or walk into, and if not blue pikmin, they can die without the bubble being popped. Spitter Leaves are close relatives of the Skitter Leaf, and are also in the same family. Do not 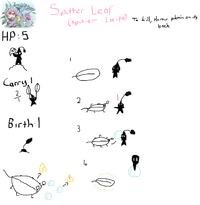 A made-up enemy, the Spitter Leaf.

underestimate it, though. As it can kill a ton of pikmin if you wander around the field too much. Eventually, the Spitter Leaf's bubbles will pop in a short period of time, which is a deep weakness. It takes about two seconds for it to pop, and has deathly low HP, so it can be killed quite easily.