From Pikipedia, the Pikmin wiki
< User:AFROMAN
Jump to navigation Jump to search

I put some Pikmin stuff I think of here.

The Afropig is an enemy that looks like an orange pig with a huge afro. They are only found near activated Radios and in Funky Valley. They drop lots of Nectar if you kill them.

These creatures have enormous amounts of hair, which they store Nectar in.
They seem very attracted to music.

Radios are small, alien-looking devices found it certain areas that emit a funky beat. This attracts Afropigs. Once they are activated, they can be destroyed; if you destroy them all, the way to Funky Valley is opened. They only emit a funky beat (and therefore only attract Afropigs) when you have the Radio Transmitter.

The Radio Transmitter is a special treasure that, when you get it, activates all Radios. It is worth 100 Pokos. It is in the Funky Beat Series.

This appears to be a controller of some kind. 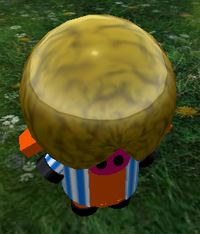 The Shining Afropig is a boss enemy found at the end of Funky Valley. He looks like a giant Afropig, standing on his hind legs with a huge golden afro and a striped jacket. In the area are four Radios; he will start invincible but when all of the Radios are destroyed, he can be fought normally. Once he is defeated, he drops the Striped Jacket, as well as a lot of Nectar and Pellets.

This creature appears to be some kind of ruler of the Afropigs. His hair is golden, and he wears a striped jacket.

The Striped Jacket is a treasure dropped by the Shining Afropig. It is worth 500 Pokos. It is in the Funky Beat Series.

The Funky Valley is a special area you can only visit if all the Radios are destroyed (except the four in Funky Valley). At the end of it, you can find the Shining Afropig. The only other enemies are regular Afropigs.