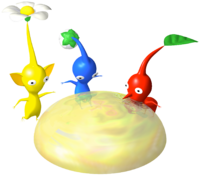 Nectar (大地のエキス?, lit.: "Earth extract") is a substance that increases the maturity of Pikmin, usually to the flower stage. It comes in the form of large drops of liquid that Pikmin can drink. It works quite differently in the main series and in Pikmin Bloom.

In the main series[edit]

A screenshot of a drop of nectar in Pikmin 2.

Any leaf or bud Pikmin that pass by a drop of nectar on the ground will crouch down and begin to slurp it for roughly two seconds, regardless of whether it is idle or has been directed to it. At the end of the slurp, it will jump up and the leaf or bud on its head will turn into a flower.

In Pikmin and Pikmin 2, a single drop of nectar can be shared by any number of Pikmin, but as soon as one Pikmin starts to drink it, the drop will shrink until it disappears when the first Pikmin is done. This means that only Pikmin which start drinking the nectar within this time window will be flowered. The time window is quite strict in Pikmin, but lasts longer in Pikmin 2. The most effective way to get a large number of Pikmin drinking the same nectar drop is by swarming them in a tight group.

There are numerous places where nectar can be found. Most of these sources will produce a single drop of nectar most of the time, but can sometimes produce more.

"This golden liquid causes immature Pikmin to instantly blossom. Pikmin move much faster once they've matured, so try to make use of any nectar you find."

Nectar is a key item in Pikmin Bloom. It takes the form of small translucent balls that can be fed to Pikmin individually; feeding Pikmin nectar is the main way to get petals. Nectar is obtained by collecting fruits, completing weekly challenges, and occasionally by leveling up. There are many types of nectar, and each type has a limit on how many balls of it can be stored; this limit is 200 by default but can be increased with in-app purchases.

Feeding yellow rose nectar to a group of Pikmin.

Nectar can be fed to Pikmin in the garden screen. In this screen, a large ball of nectar appears at the bottom, and swiping up from it throws a small ball towards the Pikmin. Pikmin run towards the ball and whichever one picks it up gets to drink it, blooming in the process. If no Pikmin picks it up after a few seconds, it will disappear and return to the player's supply. Alternatively, nectar can be fed directly to Pikmin by holding down on the large ball and dragging the finger around the screen to give small balls to whatever Pikmin the finger passes over. This process works the same way for any type of nectar. The player can also double tap a Pikmin to focus on them, and while in this state only the Pikmin that is focused on will be fed nectar.

When a Pikmin is bloomed into the flower stage with any nectar type, its flower will glow. Tapping on the glowing flower will add petals of that color and type to the player's petal supply, making using nectar the main way of getting petals. Feeding a Pikmin also raises that Pikmin's friendship. A Pikmin cannot be fed nectar again until the glowing flower is tapped and stops glowing. If a Pikmin is fed too many times in a row, its flower will disappear after being tapped, and the Pikmin will be unable to be fed for some time. 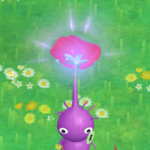 An example of the glowing effect on a Purple Pikmin.

On very rare occasions after a player fed nectar to a Pikmin, it may continue emitting a glow with an additional blue tint and a small lens flare effect. If a player attempts to collect petals from this Pikmin, it will keep giving unlimited petals of the nectar type it was fed last until the glowing stops. This lasts for approximately 10 seconds.

There are many types of nectar in this game, and each one blooms a different type of flower on a Pikmin's head. Different nectar types are distinguished by flower species and color. The following table displays all the nectar types (except for Special Nectar):

Basic nectar comes in four colors: white (regular), yellow, red, and blue (in that order of rarity). Regular nectar produces white flowers and does not bloom leaf Pikmin straight to the flower stage, instead blooming them from leaf to bud and bud to flower in two steps. Yellow, red, and blue nectars produce flowers of those colors respectively, and bloom Pikmin straight to the flower stage.

There are other species of flowers in Pikmin Bloom, and each of them has corresponding types of nectar. These nectar types take the appearance of a transparent orb containing an icon of the type of flower it will produce. When fed to a Pikmin, these will bloom that Pikmin straight to the flower stage, like colored nectar, and the flower atop the Pikmin's head will be the type of flower that the nectar represented instead of the standard Chaenostoma cordatum.

There is also an extremely rare type of nectar, called special nectar, displayed as a faceted translucent magenta heart shape. Feeding it to a Pikmin raises its friendship by 1 heart, much more than the small fraction of a heart other nectar types increase it by. It will also cause whatever color of flower previously on the Pikmin to bloom into a basic flower of the same color.

Nectar spread all over the ground in Pikmin Adventure.

Nectar makes an appearance in Nintendo Land's attraction Pikmin Adventure. Nectar is a common item that can be found inside "?" blocks, and appears as leftovers from destroyed enemies. Every three blobs, a player will level up. It takes level 5 to get a bud, and level 10 to get a flower. Players will also drop a few drops of nectar when hurt.

If the player isn't doing very well on a specific stage, the game will eventually spawn a rainbow "!" block near the starting point. Once this block is broken, a large drop of nectar appears that, when collected, instantly evolves all players to level 50.

"Nectar is a condensed, highly nutritional food source that has been scientifically proven to encourage a Pikmin's growth. Also, it looks delicious."