From Pikipedia, the Pikmin wiki
< User:Phineas81707
Jump to navigation Jump to search 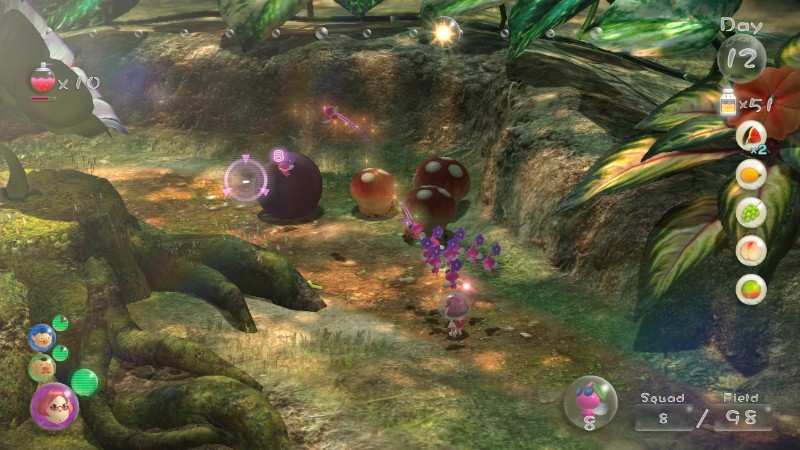 General gameplay, using the Wii Remote + Nunchuk control scheme. This screenshot shows the day meter, the day number, remaining supply of fruit, fruit collected that day, Ultra-Spicy Sprays on hand, the health of the three leaders, and the Pikmin squad. 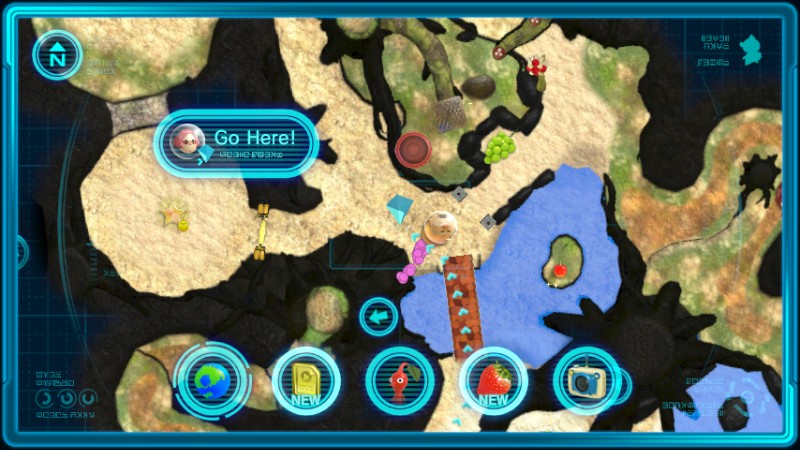 General gameplay with the KopPad. Charlie has a squad of Winged Pikmin, and Brittany is currently using the Go Here! command. An electric fence, a loading zone, three types of revealed fruit, a fruit concealed by an enemy, a body of water and a Burgeoning Spiderwort are visible in this image, among other details. 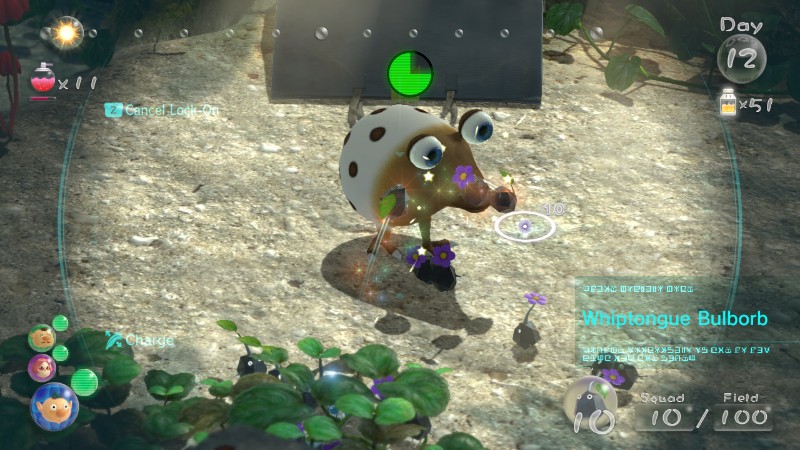 Alph battling a Whiptongue Bulborb using the Lock-On feature. The creature's Health Wheel, the controls for Wii Remote + Nunchuk, and the label applied are all visible in this screenshot. 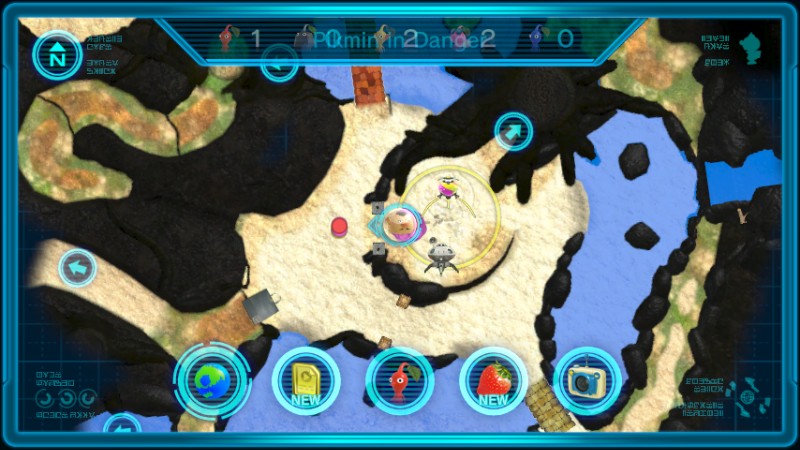 This screenshot displays, if not entirely perfectly, the "Pikmin in Danger" feature of the KopPad during dusk. One Red Pikmin, two Yellow Pikmin and two Winged Pikmin will perish if not collected by day's end. 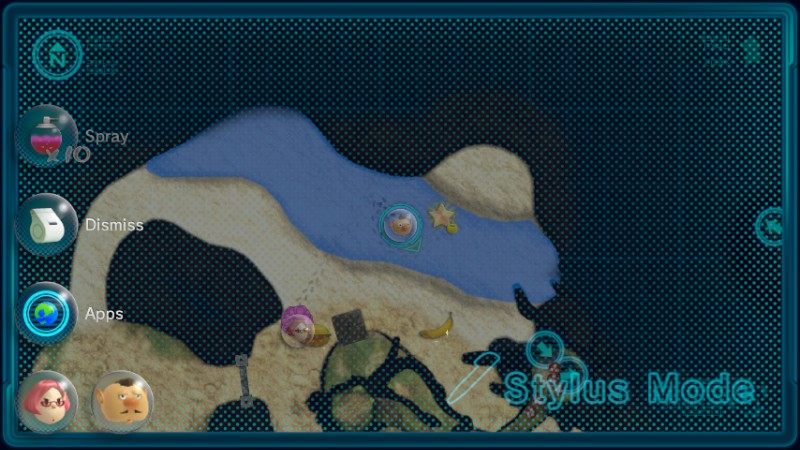 The Gamepad's display during Touch gameplay. The Spray, Dismiss, Apps, and leader change functions are shown. 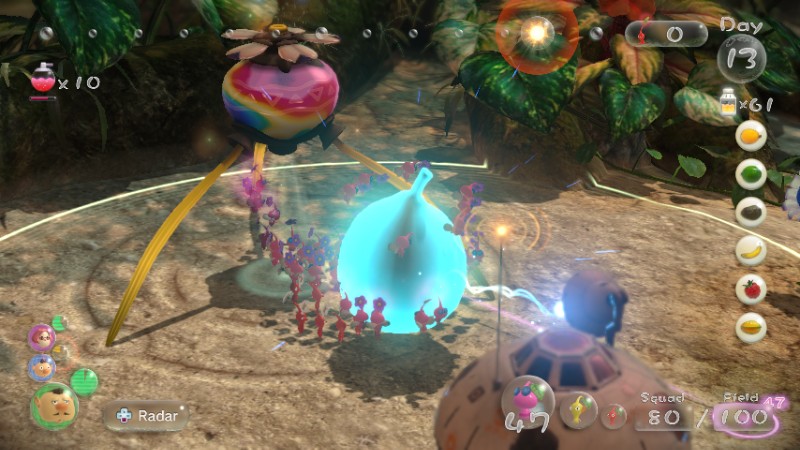 Gameplay while Off-TV, using the Gamepad controls (note the cursor). This screenshot also shows the safety ring and the top screen's display of lost Pikmin (no Pikmin are currently in danger of being lost to sunset). The main difference between this and normal gameplay is the Radar prompt. 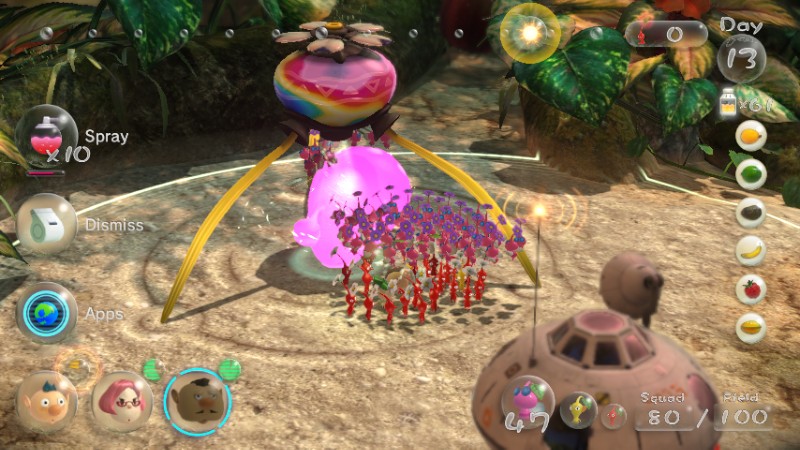 Gameplay during Off-TV play using the Touch controls. Same as above, but with the touch buttons present on the side of the screen. 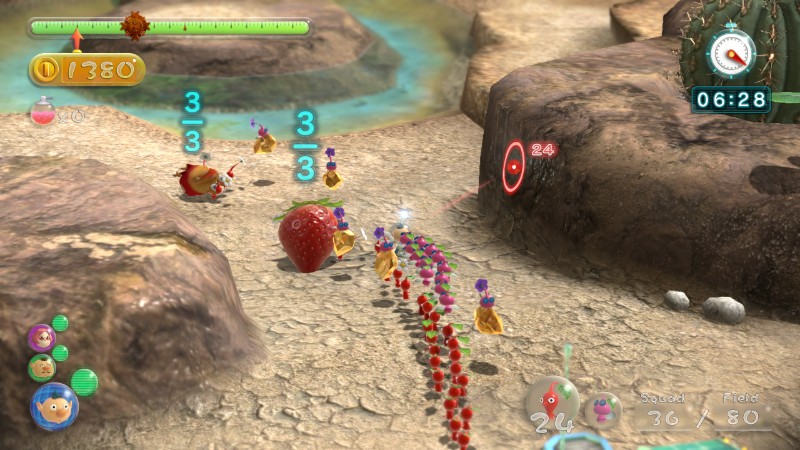 Gameplay during the Collect Treasure! Mission Mode. This shows the time remaining of the mission, as well as the Poko counter and the Bronze Medal on the slider. 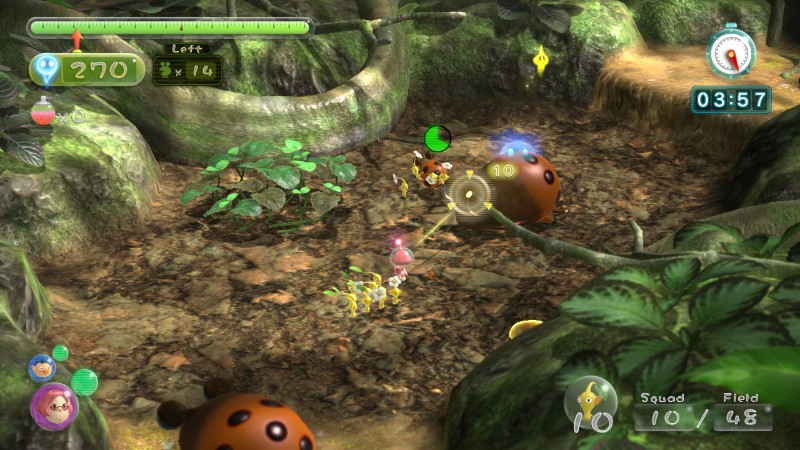 Gameplay during the Battle Enemies! Mission Mode. This shows the time remaining, and the 'Ghost counter', also demonstrating how many enemies are still alive. 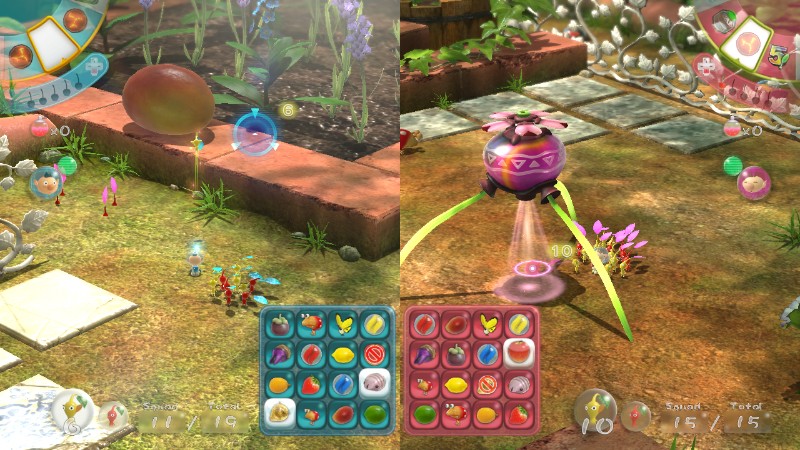 Gameplay during Bingo Battle. The Hocotate Master Onion is shown, demonstrating the red colour, and the Hocotate team also has a fortune effect in reserve (bomb-rock). The team's Bingo cards are also present, also showing the effects of losing the ability to retrieve a certain object (Koppai cannot collect an Insect Condo, and Hocotate cannot collect a Golden Sunseed).

The following images are not perfect for their intended purposes, but with the limited resources I had, I couldn't imagine any better places to obtain these images.