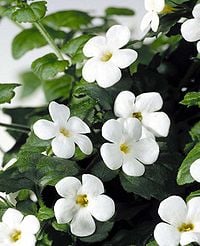 The Chaenostoma cordatum,[1] commonly known as the Bacopa, Ornamental Bacopa, Sutera cordata or Pikmin Flower, is a type of real-world flower that was used to model the flowers that Pikmin in the flower stage grow on their heads. They come in different colors: white, lavender, and magenta/violet. So far, in the Pikmin species, all three of these colors have been used, each symbolizing a generation of Pikmin, or a new game in the series. The magenta color has been used on all new Pikmin types (not counting Bulbmin) in Pikmin 2, or the second generation of Pikmin species. The lavender color has been used to top all the new species in Pikmin 3, or the third generation of Pikmin. The family of these plants is called scrophulariaceae, which is also commonly called the figwort family. Onions also have a part on the top that looks quite similar to a Chaenostoma cordatum.

Although Pikmin can have leaves, buds, or flower atop their stem, as decided by their maturity, Pikmin with a flower are given more attention throughout the series, given that the flower symbolizes the highest maturity. Reflecting the maturity, some rankings in the game also use leaves, buds, and flowers as icons to represent their value, with a flower commonly representing the most valuable rankings. Examples include the medals in Mission Mode and the icons that indicate a stage's completion in Pikmin 2's Challenge Mode.

Pikmin Bloom is the only Pikmin game where not all flower-stage Pikmin have a Chaenstoma cordatum on their head, as other types of flowers appear in the game.

This is a cultivated species of flower bred with the intention of using it to market the first game.[2] Nintendo announced the impending creation of the flower through an agreement with S&G Flowers USA in late 2001, and it became commercially available in April the following year, five months after the release of the game. The full press release can be found here. The flower is not patented in the United States Patent System, and can thus be grown freely.[3]

The Chaenostoma cordatum are a perennial type of plant (reoccurring every year). They are also an Evergreen, which means that even in the harsh winter climate and lack of sun, the plant's leaves can retain its green color. In addition, the flowers can live through the same weather without dying. This real life logic can be placed into the Pikmin world. The Red Pikmin are shown in Pikmin 2 in a harsh snowy landscape with the Pikmin’s leaf green and bright. The record for the lowest temperature a Chaenostoma cordatum has endured is 30 degrees Fahrenheit (-1.1 degrees Celsius). Chaenostoma cordatum are remarkably strong plants, as a result. Mr. Miyamoto must have had this in mind for the Pikmin to be strong and durable creatures.

The different variants of the Chaenostoma cordatum are the Snowflake white and the Snowstorm Blue/Magenta.