Pikmin Bloom is a spin-off game in the Pikmin series, released in 2021 for iOS and Android. It is an augmented-reality location-based game, co-developed by Niantic and Nintendo, with gameplay mechanics designed to encourage walking.

Pikmin Bloom is a game about walking around the real world. By taking steps and playing the game in different locations, various kinds of in-game resources can be obtained, which allow incremental progress through the game. Because of this focus on moving around, the game requires the GPS in the mobile phone to be on, and it needs permission to use the phone's inbuilt step counter, either via Apple Health, Google Fit, or within the app on Android devices. The game also requires an account to play, and the account can be set up with using either a Nintendo account, a Google account, a Facebook account, a Niantic Kids account, or, on iOS devices only, an Apple account.

One of the main things that can be done in the game is growing and raising Pikmin. Pikmin in this game start their lives as seedlings, which can be obtained in various ways. Seedlings can be placed in slots in the Planter Pack, a backpack worn by the player's avatar. After walking some number of steps (either 100, 1000, 3000, 5000, or 10000, depending on the type of seedling), the seedling will be ready to be plucked, and plucking a seedling adds a Pikmin to the player's collection. Pikmin in this game can be individually named, and the location where each Pikmin was found can be viewed in a menu. Only a certain number of Pikmin can be in the player's squad at a time, with the rest being on standby.

Pikmin can do various things. They can be sent to collect items on expeditions, and sent to destroy mushrooms. Pikmin in the squad can be interacted with in the garden screen, where they can be fed nectar, blooming the flowers on their heads. The garden screen also has an augmented reality mode, which places the Pikmin on top of real-world objects seen through the phone's camera, and allows the player to take photos. By doing things with a Pikmin, its friendship can be increased. Once it reaches a high friendship level, the Pikmin can turn into a Decor Pikmin, a special status of Pikmin that wears a costume. The costume depends on where in the real world the Pikmin's seedling was found, encouraging the player to visit different kinds of locations.

Another main thing that can be done in Pikmin Bloom is gain flower-related resources. Various types of fruit appear in the game, and can be found on expeditions and also while walking around. When collected, fruits give the player some nectar. Nectar can be fed to Pikmin in the garden screen, which will cause their flowers to bloom; tapping the flowers will give the player petals. Petals are expended by doing flower planting, an activity that plants flowers on the map behind the player as they walk. And when flower planting is turned on, fruits are more likely to appear near the player. This loop of items that each contribute to obtaining the next one is the major part of the gameplay, and encourages the player to collect more nectar and petals, though there is a limit on how many of a resource can be held by the player at a time.

Being a location-based game, Pikmin Bloom has in-game objects at real-world points of interest. Big Flowers and mushrooms are spread around the world, and can be interacted with. Locations of these are viewable on a map centered around the player. This map shows some basic geography, points of interest near the player, flowers planted by players with the flower planting feature, and items obtainable through expeditions. As the player walks around, the Mii representing the player will move on the map and so will the squad of Pikmin following the Mii.

Pikmin Bloom's overall progression is slow, with new features being unlocked over time as the player's level increases. To go up a level, a defined set of tasks has to be completed, which can include things like walking some number of steps, growing some number of Pikmin, or planting some number of flowers. Some of the features unlocked over time are expeditions, mushroom challenges, the detector, and new types of Pikmin. The game's slow pace encourages not playing it constantly, but checking in on the app every few minutes on a walk to see how tasks are going and to see what's nearby. Over time, the player can also unlock badges by completing certain criteria.

The game has a number of features which allow multiple players to interact with each other. Flowers planted with the flower planting feature are visible to other players by default, and players anonymously collaborate over time to bloom Big Flowers, making the game a kind of multiplayer idle game. Mushrooms can be attacked by up to 5 people at once. There is a weekly challenge feature where players can collaborate to complete a certain goal together. Players can add other players as friends, and send postcards to them.

Pikmin Bloom encourages players to look back over their day with the lifelog feature. This shows the tasks the player has done in the app over time. At the end of the day, a daily lookback cutscene will occur, which shows where the player walked that day, and allows the player to write a short journal entry.

Some of the game's features require the player to be connected to the internet.

Increasing the amount of steps and having their position registered in the map does not require an internet connection.

The app was announced on March 23rd, 2021, simultaneously by Nintendo and Niantic, on Twitter[1][2] and their own websites.[3][4] The initial announcements featured some basic information and a single image. Nintendo confirmed the title would be released in the second half of 2021 in its earnings release for the fiscal year ending March 31st, 2021.[5]

The game had a closed beta period, where people could sign up to receive information about the game and invitations to test the beta. Beta testing began in Singapore on March 30th, 2021[6] and expanded to Australia on April 19th.[7] The closed beta continued until the app's release.

From time to time, there are special events in Pikmin Bloom, which add temporary boosts to the game's features. These include monthly Community Day events which challenge players to reach 10,000 steps in a day, as well as other events with different themes. 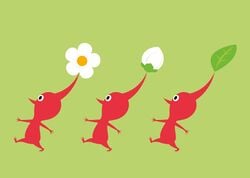 The Red Pikmin in Pikmin Bloom's app icon comes from this piece of Pikmin 3 promotional art.