Featured articles are articles that are notable for their high quality and importance. They should be complete in content, be well written, follow the policies and guidelines, and be interesting enough to be put on the front page. They should also have a very minimal amount of tasks that need to be done, and should not be about spoiler-heavy subjects.

On Pikipedia, an article is selected to be featured every 2 months, and the newly-featured article is shown on the Main Page, while previously featured articles are kept in Category:Featured articles. To decide which article to feature next, all editors are encouraged to nominate and vote on articles. When the time comes to change to a new article, one trusted editor gets tasked with checking the nominations, discussing with the community tie-breakers and other details, and update the front page. Detailed instructions for that editor can be found here. 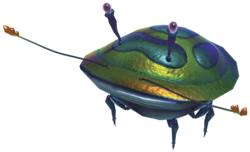 The creature in its Pikmin 3 design.

The Iridescent Flint Beetle is an enemy in Pikmin, Pikmin 2, and Pikmin 3. It is harmless to Pikmin, and instead runs around unpredictably. When a Pikmin is thrown directly on top of it, it will flip over and drop a useful object, such as a pellet or a drop of spray. Pikmin attacking from the ground cannot harm it. This enemy spends most of the time underground, only surfacing when a leader comes near, and it will return to the ground after some time has passed or after it has been hit enough times.