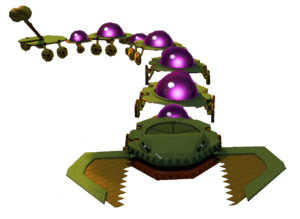 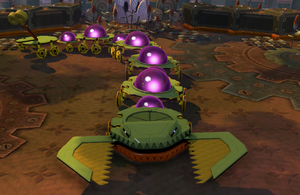 Emperor Pinchipede (ダイオウハサミムカデ?, lit.: "Great King Scissors Centipede") is the third major boss encountered in Pikmin Adventure. Just like the Beebs, it has its own unique family, the Pinchipede family. It bears a resemblance to the Armored Mawdad, a creature in Pikmin 3.

The notes are the same for both the European and American version:

“This beast's segmented body has plenty of weak points, making it easy to target. However, it will hide them when it is upset. Just don't get too close to its snapping jaws.”

Emperor Pinchipede is a difficult boss. Its body is divided into 11 segments, 9 of which have their own weakpoints. 4 of these segments are larger than the others, and are linked together by the smaller segments. Its head, which is its 1st segment, is equipped with a large pair of sharp mandibles which will instantly kill anyone in their way. It is impossible to stun it, leaving you without your stun strategy.

As Emperor Pinchipede crawls around the battlefield, its weak points may be openly attacked. However, whenever one of the 4 larger segments is broken off, it will have a mind of its own and slowly move around the stage, spinning wildly with spikes all over it. It is best advised to take out the smaller segments first so the battlefield will be less cluttered. 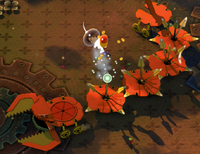 The Emperor Pinchipede getting enraged (its dangerous sides are colored in orange).

Occasionally, the boss will cover all of its weakpoints and turn orange, during which it will rampage across the map for a short time before going back to normal. Simply stay out of the way of its mandibles and you will avoid harm.

After all its weak points are destroyed, it will gain 1 more on its head segment. However, whenever it is in direct line of sight of the player, it will compact his body segments like an accordion, cover its head's weakpoint, and then shoot himself across the stage. During this process, the body weakpoints are also turned over, revealing the spikes, so don't touch the body. After it finishes this attack is when it is best to attack its head.

After its head weakpoint is damaged down to half of its health, the battle will get faster. Simply repeat the above process to defeat it. Once it is defeated, its head will explode into Nintendo Land Coins.

After defeating Emperor Pinchipede, the player can unlock it as an animated statue in the Nintendo Land plaza. It will only have its head with wheels, however.