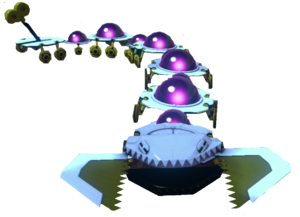 The Monochromatic Pinchipede (シロクロハサミムカデ?, lit.: "Monochrome Scissors Centipede") is the third boss fought during Pikmin Adventure's extra challenges. Like other members of the Pinchipede family, it is a long centipede-like insect with huge serrated pincers. It looks very similar to the Emperor Pinchipede, only here, it is colored white and has higher speed and health. It looks blue in the first battle it is fought, due to the ambient lighting; during the Boss Rush, it has an orange tint, for the same reasons.

Once the smaller portions are removed, quickly remove the larger, more threatening, weak points, which should be easier due to their smaller health pool. After all of the portions are destroyed, the larger spinning sections will stop, and retract back to their original place on the Monochromatic Pinchipede. 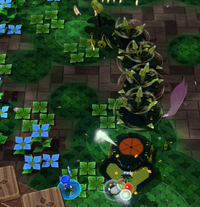 The Monochromatic Pinchipede will now pull itself backward and charge up an attack, which reveals its last weak point located on its head. Use this opportunity to dish out as much damage as possible. It will flip over to its black side and rampage across the arena, trying to corner you and crush you with its gaping mandibles. After a few seconds, it will start to slow down, indicating it will start to charge up its attack again.

Once this weak point reaches a quarter of its health, all segments will fling away from the Monochrome Pinchipede and spin around the stage. Care must be taken during this phase. Avoid the spinning platforms, and wait for the Pinchipede to charge into you. Dodge its attack and begin throwing Pikmin onto its back. These Pikmin will stay on there forever, as the Pinchipede now has no way to shake them off. At this point, you can wait out the battle by avoiding it's attacks while the Pikmin whittle it down, or try to add more Pikmin to the attack to kill it faster. Be careful, though, because the Monochromatic Pinchipede will now constantly chomp it's mandibles during this phase.

Eventually, the last weak spot will reach 0 HP, and the Monochrome Pinchipede will die.