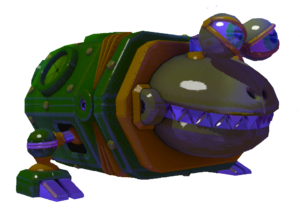 The Grand Bulblord (ショーグンチャッピー?, lit.: "General Chappy") is the first boss on the extra challenges of Pikmin Adventure. It is essentially a recolor of the Bulblord found in the 16 standard challenges. It has a similar color scheme to the Emperor Bulblax from the main series games.

The Grand Bulblord's attacks are very similar to those of the Bulblord, only faster.

The Grand Bulblord has the same strategy as the original red Bulblord, but this time, it has more health, and more speed when it becomes angered.

What you must do is remove all of its weak points from its back. If you are low leveled, it is recommend to go for the smaller ones first, as they break easily, and give you lots of nectar for you to grow. In the last challenge of the attraction, which is a boss rush, tons of Creepy Beebs and a Bulborb will spawn. Getting rid of these first will provide a decent amount of nectar.

Once the Grand Bulblord's back weakpoints have been destroyed, its sclera will turn black, and its pupils red with rage. The joins on its legs open up into weakpoints, providing the next objective. Begin targeting only one of the legs so that when it breaks, the Grand Bulblord will fall over onto its back, revealing its major weak spot on its underbelly. Once it starts falling over, call your Pikmin and teammates and begin throwing them on top so that everyone can help out. Like the Bulblord, it is possible to get a stamp by attacking and breaking its eyes, which act similar to its weakpoints.

When the final weak point breaks, the Grand Bulblords head begins to spin ferociously, slowing down gradually until the entire body explodes.

Destroying both of the Grand Bulblord's eyes will reward the player with a stamp.