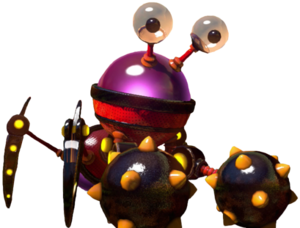 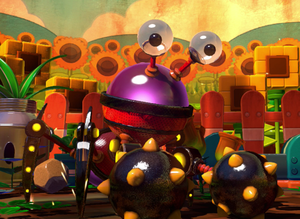 The Greater Studded Beeb (アバレワラジ?, lit.: "Raging Woodlouse"; known as Greater Studded Baub in the European version) is the boss of the nineteenth level (The Tyrant Arrives in the European version) and the final boss of the Nintendo Land attraction Pikmin Adventure. It shares the same basic shape with the Bladed Beeb, only has Spike Balls for hands instead of blades, and starts off with yellow lights instead of green.

The strategy for killing this beast is basically exactly the same as the Bladed Beeb. Just be wary that the Greater Studded Beeb has significantly more vitality, and is better at blocking attacks from the Knuckle Seed with its Spike Balls.

The Greater Studded Beeb is angry!

The first thing that must be completed to defeat this foe is breaking one of its weak points. Once one of them breaks, it will roar in rage and the yellow lights will turn red, speeding up its attacks and adding consecutive strikes to its attacks.

Keeping your distance using Knuckle Seed or Whip Seed is one good strategy, and dashing to either direction when he prepares his double arm smash attack is wise if you want to keep you power-up.

Another quick but sometimes dangerous technique is getting up close and personal with the mantis-monster. If you stay right up against the Greater Studded Beeb and pummel it with your Knuckle Seed power-up, it wont be able to strike you with its attacks most of the time, excluding its spin attack, in which case you want to jump away.

Once defeated, its eyes will widen, and it will collapse on the floor. Your Miis will pose, and the Greater Studded Beeb's body will proceed to explode into tons of Nintendo Land Coins.