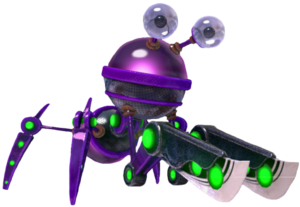 The Bladed Beeb (キザミワラジ?, lit.: "Cutting Woodlouse"; known as Greater Bladed Baub in the European version) is the final boss of the main campaign in Pikmin Adventure. It resembles a large, glossy, purple praying mantis-like creature with realistic blades on its arms. It is treated like a normal enemy in the advanced stages, where it appears multiple times in a single level and gets dropped by Dark Monita.

: “This alien insect is slow to wake but quick to anger. The adrenaline rush causes it to speed up and turn red with fury.”

: “This alien insect is slow to wake but quick to anger. The adrenaline rush causes it to speed up and turn a furious red.”

Once the Bladed Beeb is awakened, it will roar loudly and the battle will start. It will crawl about the stage, widely swinging its blades. It has three different attacks: it attacks with one blade two consecutive times, it uses both blades and dashes forward which shakes off Pikmin, or spins in a circle, which also shakes off Pikmin. Once one of its weak points is broken, it will roar very loudly and turn red, speeding up the battle. Now it will use its strike attack and double blade attacks 3 times consecutively.

Both its head and abdomen are its weak points, but attacking them is made difficult by the boss's reflexes and ability to quickly turn around. Therefore, this boss is best fought on multiplayer. It can be dazed temporarily with a rock, unlike most bosses. Bombs will not stun it, though it will deal a sizable amount of damage. It will occasionally strike, but miss, and its blades will remain stuck in the ground. This is a great time to attack, as well as throw a rock at it, as it will stun it even further.

The Bladed Beeb after breaking one of its weak points.

Once the second phase of the battle in initiated, it becomes more of a pain to attack. Wait until it misses with its blade spin attack and use the short moment of time to attack it's backside or the back of its head. A wise strategy is to run around it while at a close distance. If executed correctly, it will not harm the player. Wait until it is finished attacking to attack it in the short window of time in between attacks.

Another slightly more risky strategy is when it comes to slice up, walk straight into it. The Bladed Beeb only hits where the player is at a certain time, and by moving closer, the blades will not harm you. This is risky, since it could very easily get you while coming in. Another wise strategy for the Gamepad user is to utilize the Whip Seed and Knuckle Seed. By staying far away from it, the Gamepad user can easily pelt it from a safe distance. This works even better in multiplayer, where the Pikmin can distract the Beeb while the Gamepad user pelts it from afar.

Upon defeat, its eyes widen, and it collapses onto the field and falls apart before exploding into several Nintendo Land Coins.

Once the Bladed Beeb is defeated, Monita will give you a star rank for the Pikmin Adventure attraction, and the player can now play 6 more Extra Challenges, which are incredibly-difficult and have elemental enemies, as well as upgraded versions of the previously-conquered bosses.

On the Cage of Terror challenge, you must fight 3 smaller Elemental Bladed Beebs with lower health. The same strategies apply here, but the Beebs now have a shorter attack range and less health, making it an easier fight.