This article is about the real world locations in which games are released. For the areas in the Pikmin series, see Areas.

Due to the different cultures and languages in the world, some aspects of the Pikmin games had to be changed in each region. These changes are most pronounced in Pikmin 2, where the in-game treasures are actual items in the real word, and due to the cultural differences, not all players would recognize the objects and brands existing in the original Japanese version of the game.

There are three main game release regions: Japan, United States of America, and Europe. The Pikmin games are released all over the world, but there are only three main versions for each, one focused on each region.

The headquarters of Nintendo EAD, the Pikmin game developers, are located in Kyoto, Japan. As such, the development of each game is done in Japanese and consequentially, the first version to be developed is the Japanese one. Either shortly before release or after, the game is then sent to be localized for the United States (by Nintendo Treehouse) and Europe. More than just a translation of the Japanese game, some graphics, sounds, scripts or objects may be altered in order to fit the culture of the region.

This holds true for the Pikmin games. For all three main titles, the Japanese version is developed first, and content is then altered to suit the American and European consumer base. The Australian version uses the European changes. 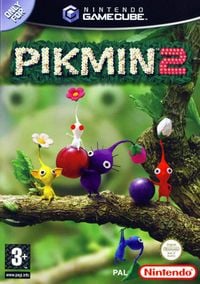 The European boxart for Pikmin 2, with the word "PAL" on the bottom-right.

Commonly, the words "NTSC" and "PAL" are used to describe the different regional versions of the game. These terms are, however, partially incorrect, as the words themselves refer to the color encoding systems used for analogue television. In order to play a specific version of a game, the television must match the color encoding. This has since been discredited for the Wii U onward with the use of HDMI cables. For the most part, the US uses the NTSC system and Europe and Australia use the PAL system. The boxart of the European and Australian versions of the Pikmin games also contains the word "PAL" next to the Nintendo logo, as do most GameCube and Wii games. These factors helped popularize the use of the terms "NTSC" and "PAL" to categorize the game regions, inadequate as they may be.

Other common names and terms for the region versions of a game are:

In order for the games to be enjoyed in several places along the world, the in-game text is written in a different language, depending on the version that's being played. The Japanese version of the Pikmin games has Japanese text, the US version has English text, and the European version has the ability to choose between English, Spanish, Italian, French and German. Another common change between versions is the boxart: the front normally contains a logo in Japanese or English, and the back contains text in Japanese, English, or the aforementioned European languages.

It's also quite normal for the English used in the European version to be British English, but this isn't always the case (the European name for the Armored Cannon Beetle Larva is the same in Pikmin 2, but the first word is localized as "Armoured" in Pikmin 3) – even the same game can alternate between American and British spelling.

Other types of changes can exist for several reasons. One persistent difference that became standard for the European version of Pikmin games, starting on New Play Control! Pikmin, was the rename of Wollywogs, Yellow Wollywogs and Wogpoles to Wollyhops, Yellow Wollyhops and Wolpoles, respectively. The reason for this change is likely due to Nintendo assuming that British players would find the term "wog" offensive. Regardless, the enemy reel in New Play Control! Pikmin was not updated to reflect this.

In the case of Pikmin, it was decided before the European GameCube release that skipping the sunset cutscene by pressing

would be convenient, so that feature was added for that version of the game. All regional versions of New Play Control! Pikmin also allow skipping the cutscene. In addition, the Japanese version contains an option in the options menu that allows the player to toggle between a "child" mode and an "adult" mode; the former makes the text easier to read. Finally, the Secret Safe requires 85 Pikmin to carry it in the Japanese version, and 40 Pikmin in the other versions.

Due to the need to support 50 Hz displays, Pikmin runs at a slower framerate in the European version, running at only 25 frames per second in-game, as opposed to the 30 frames per second framerate of the other regions (which use 60 Hz displays). Due to the game running slower and events taking longer, some cutscene songs were extended for this version. Support for 60 Hz displays in the European version was only added in New Play Control! Pikmin.

During development, Pikmin 2 needed more than just a translation, so that the in-game treasures would reflect items familiar to each region's culture. An example would be the treasure with the internal name denchi_2_red: in the Japanese version, this corresponds to a red battery of the Japanese brand "National Hi-Top". During localization for the US, it was likely decided that there were too many batteries in the game, and that the American players would not recognize the brand, so this treasure was instead replaced with a lid of Ragú pasta sauce. For the European version, it was assumed that European players would not recognize the Ragú sauce brand, so the treasure was replaced with a PscHitt! lid. The differences between the game's treasures are better detailed on the treasure article.

While most treasure changes in Pikmin 2 come in the form of including items that are familiar to the players on each region, there are a few changes that have been enforced due to potential controversies. One of the most noteworthy examples is Pikmin 2 is the Arboreal Frippery: in the Japanese version, Olimar's notes hint at it actually being a marijuana leaf. In the US, this reference was removed, but the leaf's green color was kept. Finally, in the European version, the leaf changed color entirely, in order to remove any and all similarities to the drug. The reason for these changes comes from each region's views on drug-related themes.

Other differences in Pikmin 2 also exist, for varying reasons:

While not regional differences, it is worth noting that some treasure notes are of considerably lower quality than all other treasures, exclusively in the European version. This is due to numerous typos and rather confusing English. These problems were later spotted by Nintendo, and some were resolved for the New Play Control! release, in the form of typo fixes and full rewrites. For a list of such treasures, see this category.

Like in Pikmin, Pikmin 2 also has an option in the Japanese version to swap between katakana/hiragana and kanji.

The European version supports both 50 Hz and 60 Hz displays in both the GameCube and New Play Control! releases. Unlike in Pikmin, while the game still runs at 25 frames per second on 50 Hz displays (instead of 30), the gameplay is adjusted in order to be at the same speed.

As a Wii U game, Pikmin 3 does not have completely different editions between regions. There are no differences in objects and mechanics between regions, for example. Regional differences still exist, however, in the form of language differences. Various pieces of text, such as voyage logs, character dialog, and fruit notes have to be translated into each language, and various differences in meaning were introduced in each translation. There are separate American English and British/Australian English versions, and besides spelling differences (e.g. "Armored Mawdad" / "Armoured Mawdad"), there are a few things given different names (e.g. "Check-in" / "Talk", "cosmic-drive key" / "cosmic drive key"), and the personality of the Koppaites are slightly different between them. Some of these differences between English dialects were removed in Pikmin 3 Deluxe, which replaced some British/Australian English text with American English text.

Besides that, the following differences exist:

Hey! Pikmin does not have significantly different editions between regions, and instead has multiple sets of text files and game assets that are substituted depending on the 3DS's language setting. The game is available in Japanese, American English, European English, American Spanish, European Spanish, Canadian French, European French, German, Italian, and Korean. While these settings primarily change text, there is one known model difference between different versions: the Revenge Fantasy treasure is a cartridge of the NES game Ice Climber, and uses the different Japanese and American cartridge designs in the different regions.

Text differences between the two English versions of the game are common in treasure and enemy descriptions, but some things have entirely different names between the versions. This includes one area (Scorched Earth in the American version is Charred Plains in the European version), two sections of the Pikmin Park, and the following treasures:

Pikmin Bloom does not have regional differences besides language differences. As the app is a location-based game, it uses real-world geographic data, and hence the app is only available in regions where there is sufficient geographic information in Niantic's database for the game to be playable. An official list of regions where the game is available to download and play can be found at https://niantic.helpshift.com/hc/en/23-pikmin-bloom/faq/3056-availability-by-country-region/.