I found a website in which anyone can submit models from video games. It has the unused Mario model from Pikmin and many used and final models from Pikmin 2, including the full scale Awakening Wood area (minus all the flower and plant objects that in the game are independent of the area model). I have a free open source 3d modeling software called Blender that can recognize the models complete with their original textures, and I thought they could offer some interesting info on how the game was made. I'm still testing it out, but here's an example the full Awakening Wood model (plus the Red Bulborb sleeping). There are some objects which act as textural transitions (between dirt and grass, for example) that didn't show up as transparently as they should (since the developers didn't use Blender to make Pikmin 2), and that tree near the Snagret Hole had a texture that Blender didn't stretch correctly. Otherwise everything is placed and textured as it was by the developers. Then I added planes of water (more than one plane; the geometry of the ground does not allow one big body of water), and I intensively edited all the materials and lighting so that the objects react with light a bit more like Pikmin 3. Scruffy (talk) 19:08, 30 May 2015 (EDT) 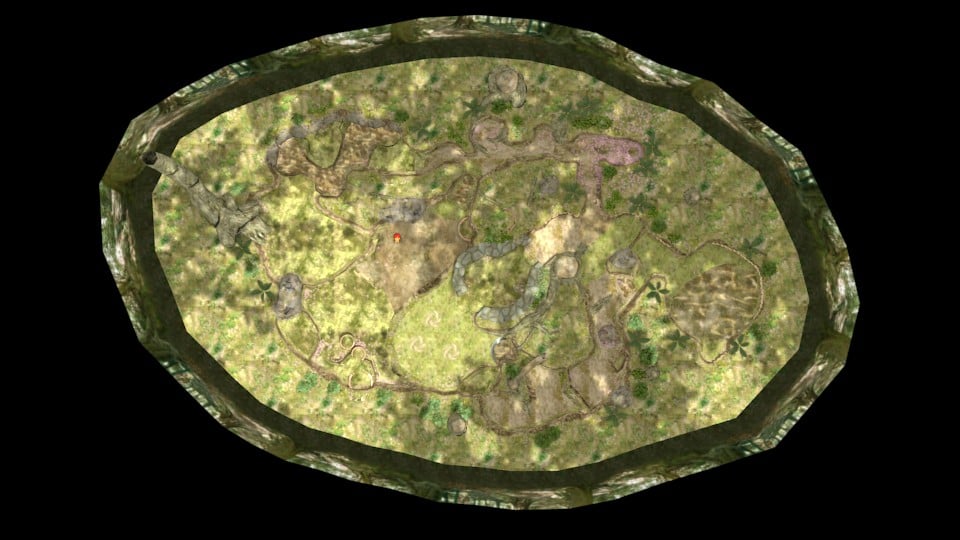 Neat! I tried opening the models straight from the ISO on Sketchup, and the result was more-or-less the same. Although I don't quite think I had transition texture problems. Still, if you have the game's ISO, extracting the models is pretty simple, with some tools. — {EspyoT} 10:10, 31 May 2015 (EDT)

Can anyone explain how to open the game's models to someone who isn't very familiar with extracting (and is also new to the Wiki)? I have a copy of the game's ISO and Dolphin, and know how to access the ISO's files, but I don't know what to do with them. From reading the game's Notes page on The Cutting Room Floor, I understand that folders like user/Kando contain models and animations. For example, user/Kando/piki contains two .szs files, piki.szs and texts.szs. What would I need to do to get to these files' contents? I'm guessing I need a certain tool to extract their data. --Bluekirby7 (talk) 16:46, 1 June 2015 (EDT)

You can search on Google for tools to open .szs files with; there are quite a few, like szstools 1.0. From there on, you'll get .bms files, which can be opened with bmdview (same website). I was going to write a general tutorial for Pikmin 2 hacking, but I'm waiting for something before I go on. — {EspyoT} 16:53, 1 June 2015 (EDT)

I found my way to the szstools 1.0 page earlier, but couldn't find anything on procedures for actually using the tools. But judging from the fact that the szstools folder that comes from that site contains mostly .exe and .cpp files, I'm guessing I'll have to run these files a certain way with a command terminal to get something out of these .szs files, similar to how one extracts the Pikmin 2 sound files using wwdumpsnd. --Bluekirby7 (talk) 17:32, 1 June 2015 (EDT)

I feel like I'm really close. I started by dragging pikis.szs to yaz0dec.exe, which gave me pikis.szs0.rarc, which I dragged to rarcdump.exe, which gave me the folder pikis.szs0rarc_dir. It contains a "designer" folder, which contains "cursor", "happa_model", "motion", "orima_model", and "piki_model" folders. I opened "cursor", which had some brk and bmd files. I downloaded the bmd tools from the same website, and dragged one of the bmd files, cursor.bmd, to bmdview.exe. What looked like a terminal window flashed onscreen for a fraction of a second, and seemingly nothing happened. --Bluekirby7 (talk) 19:41, 1 June 2015 (EDT)

Hm, now that's weird. I can't check the exact steps right now, but it should work fine. Come to think of it, I think the program is actually BMDView2. Try Googling around for where to download it (watch out for shady websites), and it should work. — {EspyoT} 06:27, 2 June 2015 (EDT)

BMDView2 works with the bmd files. Thanks! Do you know of anything that can open the BRK and BCA files? Judging from the file names, I think they're animations. BMDView2 can open animations, but only of .bck and .btp format. --Bluekirby7 (talk) 08:21, 2 June 2015 (EDT)

I still don't know how to open those. They are indeed animations, but BMDiew2 doesn't support them. It DOES however, support the animations that come with treasures and minor stuff like clogs breaking, as they're in a different format. So you at least have that... — {EspyoT} 16:05, 2 June 2015 (EDT)

Hey Scruffy, your Blender thing got me thinking. I did the Pikmin maps (like this) using Dolphin and a bunch of stitched screenshots, and I was going to do the same for Pikmin 2, until I realized that water becomes broken with free cam. So I figured: why not use Blender to render a screenshot much like the maps in Pikmin? I tried opening it up the model for the Awakening Wood in Blender yesterday, but the textures for the cherry blossoms, the rays of sunlight, and some ground overlays had no transparency. Can you help me out with that? What steps did you take to get the screenshot you posted on this thread? You don't need to explain the "Pikmin 3-like lighting" part. — {EspyoT} 06:32, 2 June 2015 (EDT)

Hello Espyo, I'd be happy to describe how I created that screenshot. The Awakening Wood file I imported in Blender was a Collada (.dae) file: specifically for exchange between 3D graphics software and some new game engines. So it was not directly from Pikmin 2 (at the time I did not have Dolphin, but thanks to your comment I have installed it and am researching extracting models), but I verified the source of the file and nothing was different from its appearance in Pikmin 2. The first step I took when I opened the file was to edit each object and delete duplicated vertices. Then I looked through the textures. Like your model, my sunlight rays had no transparency. For me, their textures were 0-transparency images; I think Blender did not load them correctly. I'm pretty sure that texture is supposed to look like just a simple diagonal gradient. In the final screenshot I left the sun rays with 0 transparency and neither casting nor receiving shadows. I did the same for the cherry blossoms, although those began with their proper textures and alpha values; it's odd that your model is missing those. Here is the texture if that helps. All my ground overlays had their correct textures loaded; if you're missing them I'd be happy post them here. The only texture with which I had some derailing trouble was the texture for the bricks in the ground near the Red Bulborb (as seen in this screenshot). Those bricks do not show up in my screenshot, although they are there. I had something that looks like their specular map, but it has a black background rather than a 0-alpha background, and I did not have the bricks' stone color texture. The rest of the textures were pretty straightforward; I made them all determine the color and alpha of their object, and I made them all receive transparent shadows. For the thinner textures that transition between two different materials, I sometimes had them not cast shadows at all, since, because they're separate objects, their shadows can be noticed slightly above the ground. I especially had to do this with the flower petal texture.

My imported model did not come with water objects. I made water objects using semi-transparent, semi-reflective planes with a water texture I found on Google Images. I then added a randomly generated texture called Stucci to the grounds underneath them; that's what looks like the caustics in the screenshot. Finally, just above the camera is a plane with the texture for the shadows of tree branches that moves in the game. That object was not present at the beginning; I created a plane for the shadows rather than assigning the texture to the light, so that I had more freedom to move the shadows around. The rest was lighting and material editing; the Awakening Wood was for the most part complete on arrival. Scruffy (talk) 10:15, 2 June 2015 (EDT)

I see. That was a great help, thank you! I was going more or less the right path, but I got overwhelmed with Blender's interface. I'll get it down one of these days. The textures did come correctly, as they have an alpha channel; it's just Blender that refused to use the alpha (or maybe I forgot to set some option somewhere). I'll look further into this, and even if I can't reach any conclusion, it's not really that important. We have bigger tasks to handle on the wiki at the moment. Thanks once again! — {EspyoT} 16:05, 2 June 2015 (EDT)