Check out my latest video on Pikmin 2 sound trivia!

Hello, I'm Scruffy. I've played a lot of video games and the Pikmin series has always held its place as my absolute favorite, by far. First and foremost I am a musician, and I think what really won me over with Pikmin was its expert musical composition and direction. I have studied the music for quite some time, figuring out how it adapts to what occurs in the game. And the first day I got a capable notation software I have been attempting to arrange the Pikmin soundtrack for a synthetic orchestra. I hope I can convince readers to listen more closely to this amazing game.

I have just discovered a meaning to the Plasm Wraith that nobody has seen before. You have to see this, all the details add up! Here's the link to my video about it!

Look here for arrangements of the Pikmin soundtracks.

You can now post a request for musical composition or a Pikmin-related CGI user image on my talk page on here or on Pikmin Fanon (preferably on Pikmin Fanon, since this stuff isn't canon), and I will do my best to make it so! The more details you give me, the more I can make it like what's in your head. For music, I will post a YouTube link on that section of the talk page once it's finished.

These are some projects I've worked on to render elements of Pikmin and Pikmin 2 in a style reminiscent of Pikmin 3, with more realistic reflections and transparency and smoother shapes. I wasn't going for total photorealism, but rather a realistic style that you could see in a video game. The HD ship parts were definitely the longest project; I'd say the hardest one was either the Pilot's Seat (I had to place each individual stitch) or the Omega Stabilizer (that shape...). My favorite project was the Chronos Reactor.

To compose each individual image, I used Blender, a free, open-source software for rendering 3d models, animation, and physical simulations. It's awesome, but it takes a lot of time to learn; I'd recommend searching it on YouTube, there's an ocean of tutorials to help you. Also, the more complex the image, the longer it takes to render; each ship part probably took around 1-3 minutes to render once it was ready.

To put the ship parts on one big sheet, I used GIMP, which is essentially the poor man's Photoshop.

Seriously, between these two programs you could fool someone into thinking a simple 3D model sphere is a photograph. It's scary powerful. 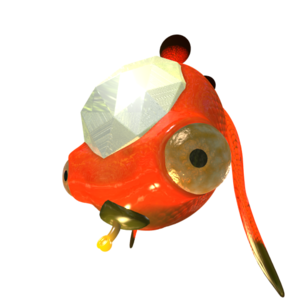 A Gatling Groink in Pikmin 3.The Orange Bulborb always gave me the most trouble of any enemy, but the Gatling Groink was a close second. A Groink would now have four smokestacks and a crystal on its head instead of a windshield; thus the crystal could be broken with enough Rock Pikmin, but like the Skutterchuck, it would be faster without a crystal in its head. The design is a mix of the classic Gatling Groink and a Celestial Eye goldfish. 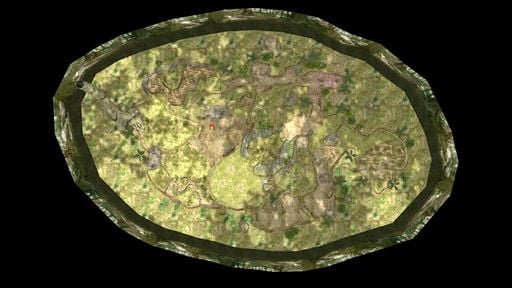 The Awakening Wood with a sun-like light source and caustics in the water. Plus a Red Bulborb in its usual spot. :)

All these textures are the originals, but I moved the texture for the tree shadows. The shadows have more contrast than in the original game, and I had some issues with the tiles in the soil, so they don't show up in this render. 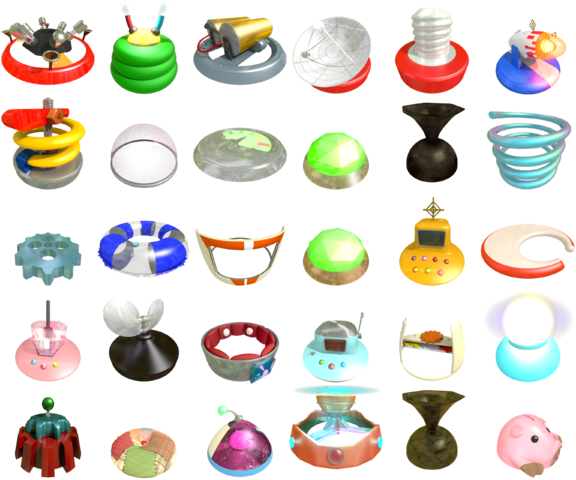 This is my biggest Blender project so far this year: HD "Pikmin 3-like" remakes of all the ship parts from Pikmin. I made all the models from scratch, and then updated all the materials with reflections, transparency and refraction, and some sub-surface scattering, among other effects and camera glare. I'll admit I made quite a few design changes, all of them to make the parts look more modern or to better reflect their purpose. I've listed my changes below: