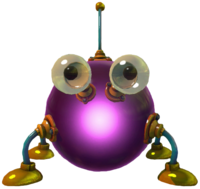 King Beeb (キングザコワラジ?, lit.: "King Small Fry Woodlouse"; known as Queen Baub in the European version) is the first miniboss encountered in Pikmin Adventure. It is a large Beeb that is twice (or more) the size of the normal "large" variant.

: “This royal Beeb of all Beebs curls into a ball and rolls around. You'd think his eyes would get in the way when it rolls, but no, it just pulls them in.”

: “This big, bad Baub blasts light, curls into a ball and rolls around. You'd think its eyes would get in the way when it rolls, but no, it just pulls them in.”

King Beeb being knocked onto his back during battle.

The King Beeb attacks identically to the Creepy Beeb, only on a much larger scale. Unlike Creepy Beebs, the King Beeb will not be weighed down by Pikmin. It will roll around the arena, trying to crush Olimar and the Pikmin.

Upon being dropped onto the stage, King Beeb will slowly wander about before flashing yellow and curling up into a ball. King Beeb rolls around faster than normal Beebs so it is advised that the player takes advantage of their ability to jump by flicking the gamepad's screen in order to avoid being crushed. The stage is shaped like an octogon, so running from corner-to-corner while he is rolling around is the best solution to avoid being crushed.

Sometimes, there will be bombs and rocks available. These are good to use against him during his rolling attack. However, they won't stun him like with most enemies, but if hit directly, he will redirect the direction he rolls in. King Beeb's major design flaw is that he is just an enlarged Beeb, meaning his still shares their trait of having his entire body be a weakpoint. As long as he is not rolling, he will be completely vulnerable.

After receiving enough damage, his body will crack and the battle will speed up. Even then, just follow the steps above and the battle will easily be one. Once defeated, his eyes will enlarge and he will collapse on the floor before exploding into coins, Nintendo Land's currency.