This is a list of enemies found in the Nintendo Land attraction Pikmin Adventure. 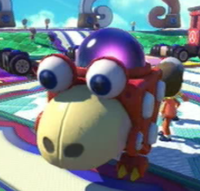 A Bulborb as seen in the Nintendo Land Plaza.

Red Bulborbs (or Bulborbs in the European version) are the most common Bulborb in Pikmin Adventure, and are battled in almost every level. They are usually small, but larger ones can be found occasionally.

Red Bulborbs are amongst the easiest to kill of all the enemies in Pikmin Adventure. When awakened, they dash in a straight line towards their target. They are easy to dodge, but should they grab a player, they will do one of two things: They will either swing them around, and then toss them far away, or they will toss it up, eat them, and turn them into droppings, making it impossible for them to be whistled at or for them to attack. In this state, players must be broken out by Olimar or other Pikmin.

The only weak spot Red Bulborbs have are their backs which, due to their quick speed and jumpy movements, make it somewhat challenging for one to hit. It is best advised that players controlling Pikmin themselves attack these enemies to take them down swiftly without any damage.

: “These grub-dog predators tend to sleep during the day and attack aggressively if woken from a nap. Bulborbs come in a wide variety of colors--now on sale at our gift shop!”

: “These Grub-dog predators tend to sleep during the day and attack aggressively if woken. Bulborbs come in a variety of colours and are now on sale at our souvenir shop.” 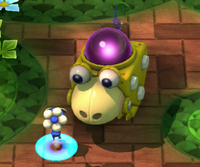 A Yellow Bulborb ready to attack the Blue Pikmin player.

Yellow Bulborbs, in addition to their basic melee biting attack, are capable of spewing orbs of water that ensnare players, rendering them helpless and useless until they are freed. If a player is trapped in a water bubble, they can be freed by having other Pikmin attack them. Unlike other types of Bulborbs, Yellows have the ability to charge at players which will instantly kill smaller Pikmin and damage larger ones. They have difficulty changing direction while charging, however, so this attack isn't too difficult to avoid. 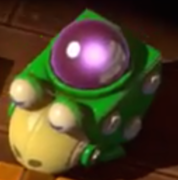 Green Bulborbs are basically just larger versions of the other Bulborbs, but they can follow the player when charging, unlike the Red Bulborbs, which only travel in a straight line. It should be noted, however, that Green Bulborbs are usually spawned with bombs or boulders available near them, so it would be advised that if you are low on hearts, to simply take them out with bombs before they even wake up. 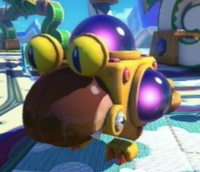 A Bilious Bulborb as seen in the Nintendo Land Plaza.

The Bilious Bulborbs is the largest of all the common mechanical Bulborbs found throughout Pikmin Adventure, and is the second mini-boss the player fights. Its eyes and color make it resemble the Orange Bulborb from Pikmin 2. They have smaller spots than normal, so it is suggested that they may not be part of the Bulborb subspecies.

Upon entering its arena, the mechanical beast will awaken and the battle will begin with a roar. Rather than charging the player like most enemies do, the Bilious Bulborb will instead stand in place and shoot Spike Balls out of its mouth. The best way to defeat this creature is with multiple players, as getting behind it is difficult with one person alone. Have the player controlling Olimar run around so the other Mii Pikmin can get to the weak-points dotting its back. Once the mini-boss has taken enough damage, it will rage and get faster, and will be quicker to shake off Pikmin. Fortunately, the stage may have rocks at its edges. If it does, Olimar or the Pikmin can pick these up to throw them at the boss. If the rocks hit the creature on a weak-point or directly on its face, it will be dazed for a few seconds. If utilized properly, the rocks can turn the tide in a losing battle and save the player.

: “The different size spots suggest that these may not be a true subspecies of Bulborb at all. Or perhaps they're normal Bulborbs feeling a little under the weather.”

: “The different-sized spots suggest that these may not be a true subspecies of Bulborb at all. Or perhaps they're normal Bulborbs feeling a little under the weather.” 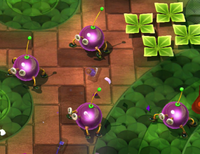 European version: Worker Baubs) are the smallest enemies found in Pikmin Adventure. They are unique in the sense that they are listed as belonging to the "Beeb family" (

European version: Soplouse family), a family that is not listed in the current Pikmin series. They resemble small purple orbs with four legs and two large, stalked eyes. They also have an antenna coming out of the tops of their heads.

Creepy Beebs come in various sizes: small, easy-to-kill Beebs, medium, still easy-to-kill Beebs, and larger, more dangerous ones. They all attack by flashing a yellow color, and rolling forward. The smaller ones are the easiest enemies to kill, as they die in one hit due to their entire body being a single weak-point. They only roll forward a tiny bit, so avoiding their attack is very simple. The medium Beebs take a few hits to kill, but are still very simple to get rid of; their attacks are the same as the small ones. The larger ones curl up into a ball to roll around continuously, crushing anything in their path. These types must be attacked when they are not rolling, or the player can also use rocks and bombs if available to stop them from rolling and daze them. They have a lot more health than the small and medium Creepy Beebs.

: “Creepy Beebs are about the size of Olimar and move in packs. They're usually quite peaceful creatures, but their flexible legs and formidable charge attack help them when they feel threatened.”

: “Worker Baubs are about the size of Olimar and move in groups. These industrious creatures are usually peaceful, but their flexible legs and formidable charge help them when they feel threatened.”

Bombardier Beebs (or Bombardier Baubs in the European version) are one of the more rare enemies seen in Pikmin Adventure. They are a variant of the common Beeb enemy that explodes after a few seconds of being spotted, making them similar to the Volatile Dweevils from Pikmin 2 in means of attack.

Bombardier Beebs are the size of a large normal Beeb. Upon spotting a player, they will activate a fuse on their heads and chase them. After about 5 seconds, they will stand in place and panic for a second before exploding, causing a shock wave that will damage nearby enemies in a short range, and easily take out nearby destructible blocks.

Bombardier Beebs can be used to the players' advantage to destroy enemies and obstacles, but one must be careful to not allow themselves to get caught in a corner, or the Bombardier Beeb will trap them and they will get engulfed in the explosion.

: “This creature is equipped with a fuse and will detonate when approached. Whatever you do, don't go anywhere near it carrying something flammable. Or inflammable, for that matter.”

: “This creature is equipped with a fuse and will detonate when approached. Whatever you do, don't go anywhere near it carrying something flammable. Or inflammable for that matter.” 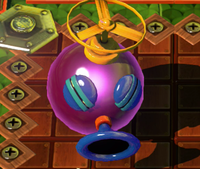 A Blowhog in Pikmin Adventure.

Blowhogs (or Puffy Blowhog in the European version) are quite rare, and are amongst the first enemies the player encounters in Pikmin Adventure. They attack by changing their snout from an opening to a needle, and charging at the players. The player will first meet them in the level Burst the Giant Balloon.

Blowhogs, while they look like Withering Blowhogs, have a completely different method of attacking. Instead of blowing air at Pikmin, they turn their snout into a spike and try to ram the players head-on.

Their entire body is a weak point, making attacking them somewhat easier then with most enemies. However, they are small, making precision in throwing difficult, and they usually hover over pits, making it difficult to throw Pikmin at them without losing them. Sometimes they will float over solid ground to combat the player, so it is best to kill them then.

: “This unfriendly beast attacks by shooting needles from its mouth but mellows considerably after the initial assault. Still, a balloon with needles inside of it... That sounds like a dangerous combination!”

: “This unfriendly beast attacks by shooting needles from its mouth but mellows considerably after the initial assault. Still, a balloon with needles inside it... That sounds like a dangerous combination!” 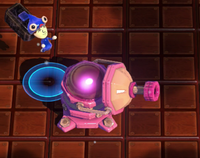 Telescoping Pumphogs are enemies that appear after the player defeats the Bulblord. Some are completely stationary and are difficult to kill when they charge up for an attack. Others delve underground and pop back up to shoot projectiles. They are based on the Blowhogs from the Pikmin series. When she was younger, Monita named them "huffy puffers", which spoofs the sentence "I'll huff, and I’ll puff and, I’ll blow your house down!" in folklore.

Telescoping Pumphogs are usually found guarding a portal to the level's next area or simply barricading an important path. When stationary, they sit about, facing a set direction. When the player comes into range, they will rise up, revealing their tube-like under-segment which inflates. They then push down, which fires out a projectile from their snouts. This projectile is usually a Spike Ball, but there are variants fought in later levels who can shoot bombs or, in even rarer cases, homing missiles.

Their weak-spot is located directly on their head, making it hard to hit when they rise up to charge their attack. However, when they are on the ground, right after attacking, they are completely vulnerable, so it is advised to attack them then.

It should be noted, however, that some variants of this enemy do not have a weak-point at all, making them the only enemy in Pikmin Adventure that is completely invincible. If you come across this type, simply destroy all the surrounding enemies to advance to the rest of the level, while avoiding the indestructible Pumphog.

: “This creature compresses air in its bellows-shaped body and uses the pressure to shoot water or projectiles. I called them Huffy Puffers in my younger days. Oh, the quirks of a single core processor.”

: “This creature compresses air in its bellow-shaped body and uses the pressure to shoot water or projectiles. I called them Huffy Puffers in my younger days. Oh, the quirks of a single-core processor.”

There are the following bosses in Pikmin Adventure: