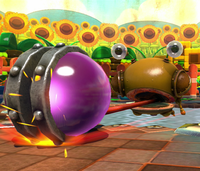 The Large-Mouth Wollywog making an entrance.

The Large-Mouth Wollywog (オオグチイモガエル?, lit.: "Big-mouthed Potato Frog"; known as Largemouth Wollyhop in the European version) is the second major boss fought in Pikmin Adventure. It is labeled as part of the Amphituber family. It resembles a Yellow Wollywog with a large, gaping mouth and a long tongue with either a weak point or a Spike Ball at the end.

US version: “The dreaded master of the swamp, this alien creature wields its tongue like a lead plated yo-yo. It also has the ability to absorb great quantities of water to keep its skin nice and slimy.”

European version: “The dreaded master of the swamp, this alien creature wields its tongue like a lead-plated yo-yo. It also has the ability to absorb great quantities of water to keep its skin nice and slimy.”

The Large-Mouth Wollywog is different from most Wollywogs in the sense that, rather than attacking by jumping on Pikmin, it attacks by unraveling its spiked tongue out of its large, gaping mouth.

The Large-Mouth Wollywog sits in a pond in the center of the stage. As soon as the battle starts, you must continuously be moving to ensure the creature's tongue does not hit you. Staying near the edges of the pond will make it easier to dodge, since the boss has a hard time rotating while on this phase. Once its tongue stops on the third time, it will hit the creature's face on its way back, dazing the beast and allowing its tongue to be attacked. Once its tongue is damaged enough, it will attack at a much faster pace. However this time, the tongue becomes a Spike Ball and its new weak points become its cheeks.

Once these are destroyed, the Wollywog will begin to jump wildly across the stage counterclockwise, and after four hops (two small, two large), it will shoot out its tongue. Stay on the opposite side of the arena during this, and dodge the attacks. Once the Wollywog finishes, quickly chase after where it is going to land and stay near it. Circle it so that you are always on its back, making it easy to dodge the tongue. When it finishes its attack, use the fact that you're close and behind it to shoot an onslaught of Pikmin. Once this weak spot has been destroyed, it will be defeated, and explode into Nintendo Land Coins.