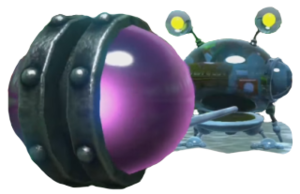 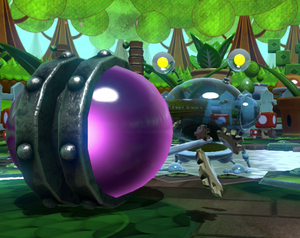 The Translucent Wollywog ready for battle.

The strategy used for the Large-Mouth Wollywog also applies here. When it shoots out its tongue, attack it while it is still out, and it will hit itself in the head and be dazed for a bit. Use this interval of time to attack the weak point on its tongue, which should break in no time. Once it breaks, the Translucent Wollywog will move back into the center of the pond. Its cheeks are now open as weak points, proceed to throw Pikmin at them, dodging any tongue attacks. After the player breaks both cheeks, its back becomes the final weak point. At this time, it is best to locate a rock, and throw it at the Translucent Wollywog. Chances are that it will be stunned for a decent amount of time, so get behind the Wollywog and throw Pikmin at its back until it breaks, finishing the fight.

Interestingly, the Translucent Wollywog is classified under the "wollywog family", not the amphituber family, likely due belonging to a separate family in the Japanese version of the game (カスミガエル科?, lit.: "haze frog family"). This is not the case in the European version.