Nintendo Cinematic Universe (NCU) is the name of a recently unveiled franchise where the universes of several Nintendo series are shared, and as the name would imply, is about cinema movies. News about the subject are sparse, but several movies have already been confirmed and their plots shared by Nintendo. 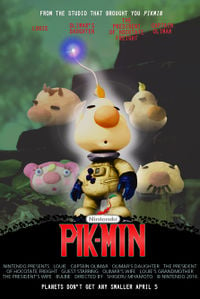 The following films have been confirmed, where Pik-Min is the movie about the Pikmin series:

S.M.A.S.H. (or "SMASH Bros.") is a recurring concept in the Nintendo Cinematic Universe. It stands for "Super Multiversal Anti-Scelerat Hyper-Brotherhood Project", and is an organization of heroes from across different Nintendo franchises. They work together to protect their universe's respective residents from villainous threats. They also work on side-projects far from view of everyone else. Captain Olimar became a member of S.M.A.S.H. some time after his adventure in Pikmin 3, but quit during the events of Pik-Min.