Louie (ルーイ?) is a secondary protagonist in the Pikmin series, serving as Olimar's partner and co-worker. He first appears in Pikmin 2 – the only game in which he is a playable character in Story Mode. In Pikmin 3, he stays at the Koppaites' ship after being saved, twice, and appears as Olimar's partner in Bingo Battle, as well as a playable character in some missions. In Pikmin 3 Deluxe, he once again accompanies Olimar as a second leader in the new Side Stories mode.

Louie is relatively new to the shipping business and has a ravenous appetite. He was raised by his grandmother, who encouraged him to play with bugs, as well as eat them – an activity he seems to partake while on PNF-404.

Physically, Louie has a single yellow tuft of hair and light yellow (beige) spacesuit, decorated with blue lines and blue gloves, like Olimar's spacesuit. Unlike Olimar, Louie is slightly lankier, his nose is rounder and slightly smaller, and his head is pear-shaped.

Louie is known to have a very ravenous appetite[1][2]. He has prepared many recipes for creatures on PNF-404, even attempting to eat creatures that may be inedible to his species. His notes on the Iridescent Glint Beetle suggest he wants to start his own cooking show, called "The Insect Gourmet!"[3]

As a child, he was quite skinny, and his grandmother always had him eat everything on his plate.[4] When he lived with his grandmother, he used to be forced to play on a hill behind their house, where she would make him eat plants and bugs[5], the latter of which kept nibbling on him.[6]

Louie during the Pikmin 2 introduction cutscene.

Louie's first mission for Hocotate Freight was to transport a shipment of valuable golden pikpik carrots. In it, he was supposedly attacked by a ravenous space bunny, and the carrots were lost. The President of Hocotate Freight took out a giant loan to cover the losses of the carrots, and had no way to repay the debt other than sell off company assets. On Olimar's return to Hocotate, the President learns of the existence of treasure on PNF-404, and orders both Olimar and Louie to retrieve objects that can be sold for profit, in order to save the company. A few days after the departure, it is confirmed by a letter from the President that Louie has been working at Hocotate Freight for three months by that point.[7]

As Olimar and Louie head to the Valley of Repose at the start of Pikmin 2, Louie falls out of the cockpit, leaving Olimar alone. After making contact with the ship, Louie sets off to return to Olimar at the landing area. On the way, he discovers a Red Onion and cultivates some Pikmin sprouts, just as Olimar had done when he was stranded in the first game. The player can control Olimar or Louie, and using the latter, make him reach Olimar through the use of the loyal Red Pikmin. The two then proceed to retrieve the Courage Reactor, the first treasure of the game, effectively starting the adventure.

The debt is eventually payed off throughout the game, treasures being found in the Awakening Wood and the Perplexing Pool, as well as the Valley of Repose. After collecting

× 10,000 worth of treasure, Olimar blasts off from the planet, noticing too late that Louie is left behind. 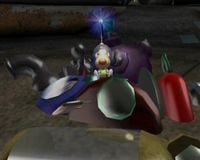 Louie, as seen before the fight with the Titan Dweevil.

Olimar and the President of Hocotate Freight return to the planet to find Louie and gather more treasure. Louie aimlessly wanders around the planet for a bit, as seen in the credits roll of the game. Olimar and the President later find him in the Wistful Wild, hidden deep in the Dream Den, on top of the Titan Dweevil. They rescue him and send him to the ship's treasure hoard (since the cockpit is already full), calling him the King of Bugs.

It is unknown whether Louie was a captive of the Titan Dweevil, or in actuality controlling it. Some of the pieces of mail the player receives from Louie's grandmother reflect that he was made to play with bugs by his grandmother as a child, so he has a great deal of experience with them; therefore it is possible he had the ability to control the Titan Dweevil. This is heavily hinted at by the sales pitch on Louie, here denoted as the King of Bugs, which in itself implies this as well, and the fact that Dweevils naturally mimic the objects they carry. However, if Louie really was in control of the Titan Dweevil, it was still not him or the Titan Dweevil who attacked, but actually the treasures carried by the Titan Dweevil. Of note is that if Louie is rescued, but the weapons are not, the Dweevil will still be fully aggressive on the next trip to the sublevel. In addition, in the Titan Dweevil's Piklopedia entry, it is noted that the creature has a habit of picking up shiny objects – potentially including Louie's helmet or its antenna.

In Pikmin 3, Louie makes his first appearance in a transmission received by the Koppaite explorers, who mistakenly assume him to be Olimar and set out to find him. After rescuing him from a swarm of Scornets, the Koppaites take him back to the S.S. Drake, and the ship labels him "Hocotatian". They then discover he has gone into a forced sleep caused by his suit; when he wakes up, he lands the Drake in the Garden of Hope while the crew sleeps, steals their juice supplies and the captain's rubber duck, and flees. In the process of fleeing, he manages to blow up a cinder-brick wall thus giving access to the second section of the Garden of Hope. It is currently unknown how he managed to do this.

Later, the Koppaites find Louie in the remains of the Quaggled Mireclops. They take him back to the ship and tie him up, retrieving the stolen items and interrogating him on the whereabouts of the actual Captain Olimar, once they learn his identity. The S.S. Drake now labels him "Food Thief". After Rescuing Olimar from the Plasm Wraith, they give Olimar and Louie a lift back to Hocotate. However, after taking off, Alph writes in a note that Louie has gone missing again. Still, the Koppaites do not show much interest in trying to rescue him, as Alph simply says that "I'm sure he will be fine..." He is confirmed to have returned to Hocotate with Olimar in Olimar's Comeback, possibly retconning his second disappearance.

Louie is featured shortly in each of the expedition logs that the player can unlock by collecting every secret memo. He is usually seen being ambushed by some enemies, like the Peckish Aristocrab or some Scornets. In the last exploration log, he is seen running away before Captain Olimar gets kidnapped by the Plasm Wraith. He even said that he had a bad feeling about landing at the Formidable Oak. He appears to have fled to the Twilight River right after.

There is an unreleased video that was never announced by Nintendo and was kept as a secret. This one, unlike Olimar's logs, seems to take place during the Koppaites' hunt for fruit. In it, he explains how he stole the juice from the leaders and found the Wayward Moon, just before being kidnapped by the Quaggled Mireclops.

Louie is an unlockable character in some Mission Mode levels, as of the December 2nd, 2013 DLC pack. Louie is always kidnapped by an enemy, and by carrying him back, the player will be able to play as him. He functions the same as any other character, and has a yellow background for his character icon on the bottom left. When saved, he will say something arrogant, like "Took you long enough!".

Louie is also briefly mentioned on Olimar's notes on the Crammed Wraith. He says how he wishes Louie was with him, so he could tell with his cooking skills if the creature is actually delicious.

Occasionally, Louie will mutter to himself "Olimar – ...Huh?...Olimar?", while idling in Pikmin 2. Luigi also says "Mario... Uh... Mario?" occasionally while wandering the mansion in Luigi's Mansion.