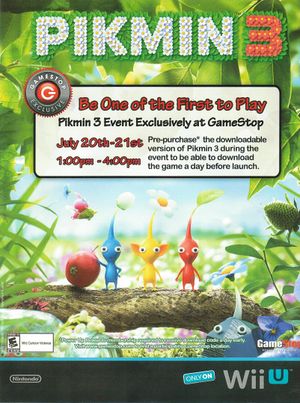 A flyer for the hands-On event advertising the promotion.

The Pikmin 3 GameStop Hands-On event was a Nintendo-hosted event in which players could try a demo of Pikmin 3 before release. The event happened over a weekend, on July 20th and July 21st, from 1:00 PM to 4:00 PM EST, and took place at over 250 GameStop and EB Games locations[1][2]. The event also featured a pre-order promotion for a digital download of Pikmin 3 allowing the game to be downloaded on August 3rd, 2013, a day before release.

This Kiosk Unit demo of the game is different from the eShop demo.[3] Before the game proper, there's a small blurb alongside a quick tutorial video. In the demo itself, on the title screen, the Mission Mode option has a "Demo" label on top of it, with a Red Pikmin poking from behind. Inside the Mission Mode menu, it's revealed that the mode is called "Demo" here, with the subtitle "Pikmin 3 - Try it for yourself!" Only Collect Treasure! is available, and the only stage is called "Trial Stage". The player is given 6 minutes to complete the stage. Right before the player can go ahead and start the stage, a quick guide appears, showing off the controls, and the basics of Pikmin behavior and life cycles. The stage is similar to Tropical Forest, but with different object placements. Pausing the game mid-stage will show the controls again, and when the time is up, the words "End of demo" appear, followed by the stage results, but with the title "Demo version" on top. After that, the message "Thanks for playing! There's lots more to explore in full the version of Pikmin 3." before it boots back to the main demo menu.

On July 15th, 2013, GameSpot's and Nintendo of America's YouTube accounts had an identical video[4] uploaded to them, in which Reggie Fils-Amie, CEO of Nintendo of America, provided details of the event. Those locations had a Pikmin 3 demo booth installed, run by a Nintendo representative, where players could play an early demo version of Pikmin 3, featuring an exclusive version of the Tropical Forest map. This demo was the same one made available to play during E3 2013. Some stores were also giving away the same Pikmin 3 patches that were given out at E3 2013, as well as some Nintendo E3 themed lanyards. It was also reported that some other games which had demos available at E3, such as Mario & Luigi: Dream Team, were shown off at some of the locations of the event.

Attendees who pre-purchased Pikmin 3 at the event would receive their special download code from the GameStop or EB Games website, that could be redeemed on August 3rd, 2013, allowing them to get the game a day before its official release. The code was to be sent to their GameStop membership inboxes on 11:59 PM of August 2nd, 2013.

Many attendees who had pre-purchased the game at the event, unfortunately, did not receive their copies a day early. GameStop addressed the situation, apologizing and explaining that an error had caused 3 different SKUs for the same item to be made. Those who pre-purchased the game were randomly assigned one of the three, which was printed onto the purchase receipt. Since these SKUs were used to randomly generate the download codes for the early release, this caused several problems in the redemption of the game.

It is estimated that most people's orders were placed in the correct SKU, allowing them to download their game a day early as intended. However, about a third of the orders were marked as a regularly purchased downloaded copy of the game. Because of this, GameStop could not verify whether or not the person attended the event, making it so they could not legally be given said person an early copy of the game, forcing customers to wait until the game's actual release to play.

A few customers who pre-ordered a physical version of the game during the event had their game mistakenly listed as the early-access version of the game, which was digital. Since the SKU involved with the early download code was programmed to no longer work after August 3rd, 2013, attendees who were assigned this SKU tried to return to GameStop in hopes of getting the physical copy instead. However, because the SKU no longer worked, the registers at GameStop kept reading the attempted purchase change as an out-of-stock item. Fortunately, those who made the pre-purchase on July 21st, 2013 were able to get a refund, because the maximum number of days before refunds are no longer allowed at GameStop is 15. However, this also meant that those who pre-ordered the game on July 20th, the first day of the event, were unable to get a refund, effectively having to pay for the game twice.

Shortly after this unfortunate event occurred, many angry gamers who fell victim to the event took to social media[5] and online forums[6], making others aware of the occurrence. Many blamed GameStop's faulty download-code system and their apparent ambivalence towards the situation, while others blamed Nintendo themselves. Since then, Nintendo removed the original video detailing the event from their YouTube account. However, GameSpot's upload of the video remained online, and is still up to this day.[4]