Pikmin 3, like other games, went through several iterations that never made it to the public. Some of these had content that was changed or removed before the final release. Because the exact versions in which these tidbits appear is not known, their name is not given here, but fans usually call these "beta", "alpha", or "pre-alpha" versions.

In addition, there is unused content inside the disc that also hints at what type of content was meant to be in the final release, at one point.

In a prototype version, Alph had smaller eyes and pupils.

In a prototype version, Brittany's suit was yellow, both in-game and on concept art. In the final version, her suit was changed to pink. Her original concept art also lacked glasses, which she has in the final game.

There was one character that never made it into the game in any footage whatsoever, and was scrapped early in development. He was shown off at E3 2012 in a bit of concept art, and all that was underneath him was the letter "D". With an interview with Shigeru Miyamoto[source needed], he stated that there were three leaders playable in the game, suggesting Character D was scrapped early on, since he was never shown in any footage. Since Alph, Brittany, and Charlie all had the first letter of their name under their art at E3 2012, it is speculated by fans that the character's final name was meant to be Drake, keeping in line with the military alphabet theme, but this name was eventually moved to the game's ship, the S.S. Drake. A possible reason for the scrap could've been due to the fact that controlling and switching between four leaders would have been considered too chaotic.

A front view of this red character.

In some footage, it is possible to see an unknown leader that wears a red-accented spacesuit and looks similar to Alph but with brown-yellow hair rather than blue.

In the earliest footage shown of Pikmin 3, Rock Pikmin had a slightly different appearance, with slightly darker coloration and dark-colored limbs. They also made different sounds that sounded like lower-pitched versions of common Pikmin sounds. Each Rock Pikmin was also shaped slightly differently (e.g. some were shorter but wider). This made them seem more like real rocks, but the feature was eventually removed in the final game. Also something to note, Rock Pikmin in the E3 demo have blue bulbs on their heads, instead of purple like the final game. Winged Pikmin also have blue flowers, as seen on the E3 presentation.

As referenced by their internal name and seen in concept art, Winged Pikmin were originally going to be orange, as opposed to the final main color of pink.

Bulbmin were probably considered to be in the game, based on concept art and their model's presense in the game files. It was likely scrapped early in development though, as its appearance is identical to Bulbmin in Pikmin 2.[1] 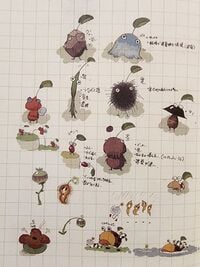 The page in question, featuring several unused and unfinalized ideas.

A notebook handed out in the 2014 Nintendo game seminar featured several concepts of ideas for Pikmin types, mostly unused ones, presumably for Pikmin 3.[2][3] It includes art, as well as notes in Japanese. The following can be noted:

There are unused files inside the game for a handful of enemies, both new and returning. These got removed for reasons unknown. Many of these, such as the returning enemies from Pikmin 2 are heavily unfinished, and some do not even spawn.

Moreover, while in the final version of Pikmin 3 a Whiptongue Bulborb releases any Pikmin caught in its tongue if it is hit in the eye, in the E3 trailer of the game, it is seen eating the Pikmin before flinching.

In an early build of the game, the lock-on feature would cause the camera to enter a tilt-shift mode to focus only on the creature, which would be highlighted in blue. The name of said creature was then displayed in simple blue text above it. This was greatly changed for the final game, in which the scene is covered by a vignette effect, and the name is displayed in a box in the lower right corner, surrounded by Koppaite text. With the update released on May 29th, 2014, the lock-on mechanic featured two new images on the left side of the screen. One shows which control makes the Pikmin charge, and the other shows how to cancel the lock-on.

Originally, the whistle in Pikmin 3 had a smaller radius than in the past two games, and lasted for a shorter length of time. This was later changed to be slightly larger and longer, and included the ability for the whistle to call Winged Pikmin by raising off the floor after fully expanding to create a cylindrical beam of light.

Brittany is higher than Alph, her starting point.

In the early footage shown of the game, the leaders were first shown to have the ability to toss one another to access new locations. At this point in development, the leaders were thrown much higher than they are in the final game. This change was most likely made to rid the game of some areas where players could easily break the barriers.

One early screenshot of the game shows the snow pile with an iron ball that resembles the President. On top of this pile lies a Cupid's Grenade that is not in this location in the final game. It is likely that the Cupid's Grenade behind the sculpture is where this one was moved, as it is the closest to the earlier location.

In the Nintendo Direct on April 17th, 2013, it's possible to see a Swooping Snitchbug in the Tropical Wilds. In the final game, the Swooping Snitchbug is placed somewhere else in the map, and in this part of the area, a Bulborb and three Dwarf Bulborbs appear after day 1.

It should also be noted that some Mission Mode areas contained certain types of Pikmin that are no longer available in these maps today.

In an early version of the title screen, the logo contained a "3" made of violet flowers, to resemble the flowers of the Rock and Winged Pikmin. In the final game, these flowers were changed to orange, possibly to represent ultra-spicy spray. In addition, the earliest footage of the game showed that it was originally much dimmer than the final version, although this was possibly due to the fact that the lighting engine wasn't complete at the time it was shown.

In the earliest footage of Pikmin 3, crystals were much more opaque. In the final game, they were changed to be transparent.

There is also gameplay of an unknown build of the game that takes place in Tropical Forest, but the HUD's positioning is different from anything in the final game or other demos of Pikmin 3. Particularly: the health meter for the current leader is next to the left edge of the screen, a bit above the center, and the Pikmin counter is at the bottom of the screen, centered horizontally. There is one recorded image of the gameplay, but it's not clear if this is single-player gameplay, or if it is the left screen in co-op mode.