Miiverse was an application on the Wii U and the Nintendo 3DS that has since been discontinued. It allowed users to share messages and in-game screenshots with each other, in communities based around specific games. The Pikmin series had three communities: the Pikmin 3 room, which was for discussion of Pikmin 3 and the Pikmin Short Movies, the Pikmin 3 Developer Room, where Nintendo developers, specifically Shigeru Miyamoto, discussed updates to both Pikmin 3 and other important events in the Pikmin franchise, and the Hey! Pikmin room, for discussing Hey! Pikmin. Miiverse as a service shut down on November 7th, 2017.

Pikmin 3, like most other Nintendo games, allowed users to write posts or make drawings on the community, including pausing the gameplay with

and creating a post using one of the two screens at the time the game was paused. Besides that, Pikmin 3 also allows players to look around using the Wii U GamePad, by use of the in-game KopPad camera, and by pressing

, a picture will be taken. When Miiverse was operational, some seconds after the photo was taken, the Pikmin 3 Miiverse post submission page would open up, with the photograph ready for upload. The player could then set their mood, and add their own text and/or drawing to the submission. Depending on what was focused, the submission would automatically be tagged with one of the following tags:

The game received Miiverse compatibility with the 1.1.0 update.

It should be noted as well that one of Shigeru Miyamoto's posts revealed how to input the code found through collecting the Secret Files into http://www.nintendo.co.jp/pikpiksecret,[1] as this information is not actually detailed within the game itself. With Miiverse's closure, this information became unavailable to new players.

Hey! Pikmin did not have special Miiverse integration, other than the standard community for the game, where users could create text posts or drawings, and could also submit posts with screenshots taken by pausing the game with 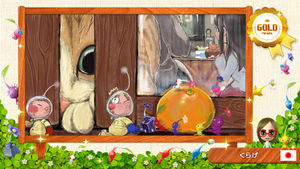 On November 7th, 2014, Miyamoto announced a Pikmin art contest for Art Academy: Sketchpad.[2] The theme for the drawing challenge was titled "Pikmin Spotted!", and users were tasked with drawing Pikmin in different situations. Requirements for entries were as follows:

Entries were submitted as comments on Miyamoto's posted in the Art Academy: SketchPad community on Miiverse. The challenge ended on December 1st, 2014. On December 16th, the winners were announced.[3] The user under the name くらげ? (lit.: "Jellyfish") won first place, with a drawing of Olimar and Louie being followed by some Pikmin. The Pikmin are carrying an orange behind a windowsill, and Louie is startled by a common house cat.