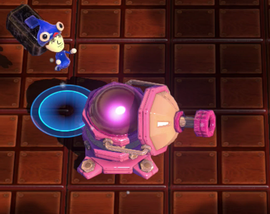 A player as a Blue Pikmin attacking a Telescoping Pumphog.

The Telescoping Pumphog is a stationary enemy in Pikmin Adventure that resemble Fiery and Watery Blowhogs from the Pikmin Series. They shoot many different projectiles at the player including Rocks, Spiked Balls, and blobs of water which will slow down any player caught inside of it. The player can be freed from it if another player attacks the bubble. Other Telescoping Pumphogs delve underground and pop back up to shoot, and some variants of this enemy are made entirely of stone and cannot be attacked.

“This creature compresses air in its bellows-shaped body and uses the pressure to shoot water or projectiles. I called them Huffy Puffers in my younger days. Oh, the quirks of a single core processor.”

Telescoping Pumphogs are usually found guarding a portal to the level's next area or simply barricading an important path. When stationary, they sit about, facing a set direction. When the player comes into range, they will rise up, revealing their tube-like under-segment which then inflates. They then push down, which fires out a projectile from their snouts. This projectile is usually a Spiked Ball, but there are variants fought in later levels who can shoot bombs or, in even rarer cases, homing missiles.

Their weakspot is located directly on their head, making it hard to hit when they rise up to charge their attack. However, when they are on the ground, right after attacking they are completely vulnerable, so it is advised to attack them then.

It should be noted, however, that some variants of this enemy do not have a weakpoint at all, making them the only enemy in Pikmin Adventure that is completely invincible. If the player comes across this type, they should simply destroy all the surrounding enemies to advance to the rest of the level while avoiding the indestructible Pumphog.