From Pikipedia, the Pikmin wiki
< User:AFROMAN
Jump to navigation Jump to search

Note that none of this works with the stuff in Main Creations (even though there is a picture of Style Pikmin attacking an Afropig); this is basically my old userpage.

The Style Pikmin (or Funky Pikmin) is a fan-made Pikmin designed by AFROMAN. Usually it is pathetically weak, but if there is a funky beat nearby, it becomes much more powerful. It's distinguishing features are it's luxuriant mop and it's blue eyes. It somehow ties it's stem under it's hair. You can only find them in Funky Disco Onions, which are very rare and emit a funky beat. An idol Style Pikmin near a funky beat will dance. 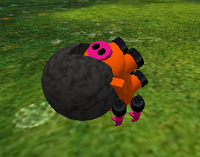 If Style Pikmin at full power attack an enemy, they will pick it up and throw it, usually killing it in the process.