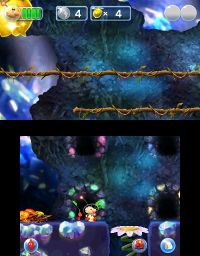 Doorways are special objects in Hey! Pikmin. They appear in almost all areas, and are a part of the background. When Captain Olimar is in front of one, the player can tilt

to make Olimar and his Pikmin go inside. The scene then transitions to a different doorway somewhere else in the area, and Olimar and the Pikmin come out of it. If the player is on the front side of the area, this will take them to the equivalent doorway on the back side, and vice-versa.

Although most doorways can be walked to and from, some of them cannot – a doorway that is hanging on a wall, and has no floor for Olimar to walk in front of cannot be entered, unless he is using the jetpack. Since some doorways lead to new places, sometimes a cutscene will start when some doorways are entered or exited, showing some important mechanic about what is on the other side, or just showing a humorous scenario, like Pikmin falling out of doorways with no floor in front in Drenchnozzle Den.

When a doorway is entered, Pikmin that are carrying or fighting something will drop the object and become idle, although they can still hold on to a carrying object if the player didn't wander too far. Enemies cannot enter doorways.

Front side and back side[edit] 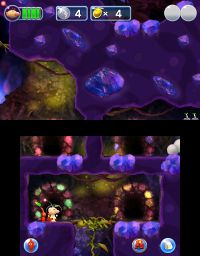 Back side of the area in the equivalent spot of the previous image.

Most areas have a "front side" and a "back side". The front side is usually the default, and uses a natural color scheme and music, while the back side usually features a more aggressive color scheme, is usually more claustrophobic, and uses more ominous music. On the radar, the two sides appear in different colors, blue and purple.

The only way to travel between the two sides is via doorways, and each doorway corresponds to an equivalent one in the opposite side of the area, in the same spot. This means that if there are two doorways a certain distance apart in the front side, there will also be two equivalent doorways at the same distance in the back side, as seen, for instance, in Springpetal Cave. Due to the doorways being in the background at all times, this would mean that the back side of the area has the same doorway positions, but mirrored, but in reality, that doesn't happen. So if a player on the front side has a doorway to the left, and another nearby to the right, entering the left doorway will make Olimar come out of the left doorway in the back side, which is impossible in real life.

As shown in some cutscenes, two doorways are connected by a tunnel. The player does not get to play in these tunnels, and they are only visible in the cutscenes.