From Pikipedia, the Pikmin wiki
Jump to navigation Jump to search
This topic is closed: non-wiki discussion is no longer handled on these forums.

Looking at pictures of it while you sculpt helps plus don't fear mixing the colors. Take your time. Build easier objects first. Get the clay warms so it is sticky and molds easy! ;D I was actually thinking of this a while back...~Crystal_Lucario~ 01:19, 13 April 2008 (UTC)

Er, I don't know what might help. So you know, if you want to show videos, you must upload somewhere else. YouTube makes it easier for everyone, but you could try any free file hosting site. I've used FileFront in the past, and that works fine. GP 19:50, 13 April 2008 (UTC)

I was doing random page and randomly sculpting, so I got the ACB. I'll upload some pics, cause I have ten million.

I cropped your images, as they were massive. We would be able to see them much better if you took an image closer to the models. Anyway, I think you could do with looking more closely at Pikmin. Their heads are much rounder and their bodies and arms smaller than in the one with two, though the white one's more accurate. Try to make the stems longer and thinner, and the leaves larger. GP 09:22, 15 April 2008 (UTC)

I like the white and the can :D ~Crystal 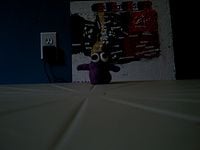 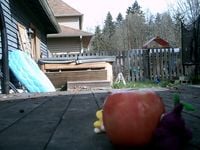 The first new one is a little hard to see but I like the apple one. ~Crystal

Er, maybe move them less each frame, or make frames longer, so it's possible to tell what's going on. Also, keep the camera perfectly still the whole time. Looks like something interesting's going on, though... Er, and what's the circle in the middle? GP 10:51, 24 May 2008 (UTC)

The white Pikmin went twords the can went over to something got squished , dropped pelets, the purple came and took a pellet. ~Crystal

No. No. No. No. No. The White Pikmin went for the Utter Scrap, but realized it was too heavy for him. Suddenly, the Proton AA fell, but this was also too heavy. A bottle cap fell. This was too heavy, however a Yellow Pikmin appeared and assisted him. Then a Bulborb appeared and ate the yellow. He also ate the white. He was poisoned and dropped pellets. Then a Purple Pikmin came and took the bottle cap. Fly Guy 2