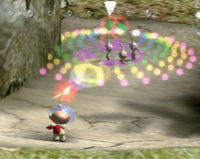 This article is about the whistle used by the leaders. For other uses, see Whistle (disambiguation).

The whistle (笛?) is a main part of the gameplay in the Pikmin games. It is the primary way of calling idle Pikmin and leaders over onto the active leader's group, the secondary way being the active leader bumping into them (except in Pikmin 2, where a leader bumped by another will not be called over). Whistling can also be used to instantly rescue Pikmin who are under the effects of certain hazards, or Pikmin trapped by special enemy attacks.

in the first two games,

in Pikmin 3 Deluxe. The longer the button is held, the wider the call's radius, up to a size and time limit that depend on each game.

The whistle in Hey! Pikmin works differently from the main games. Instead of blowing sound to a point the player can control, using the whistle calls all Pikmin on-screen to rush to Olimar's side, assuming they are not working on an obstacle.

Pikmin that are running around in a panic, on fire, choking from a water bubble, or choking in poison can be rescued instantly by being whistled. Pikmin that are drowning can be whistled in order to make them slowly move towards the leader and hopefully jump to the shore in time. Pikmin who are about to fall prey to the Vehemoth Phosbat or Sandbelching Meerslug's vortex attacks, or stuck in an Arachnode's web can also be whistled in order to free them.

In Pikmin 3 Deluxe, Pikmin that are working on a task will not head to the group when whistled, at first. This allows the player to whistle idle Pikmin near the worker Pikmin without the fear of making the worker Pikmin cancel their tasks. When whistled, worker Pikmin pause what they are doing, freeze in place, and if they are carrying something alone, they will also face the leader. After some seconds, they resume their task. In order to call a worker Pikmin over, the player must whistle them for a long period of time, or whistle them a second time after the first whistle freezes them. The following is a list of tasks that cause Pikmin to freeze and pause when whistled briefly:

The maximum radius (unmodified by the Mega Tweeter) is about the size of an Onion's circular landing pad. Pikmin 3 Deluxe's whistle has a much larger radius than in Pikmin 3, roughly 2.5 to 3 times the size.

At any point, the player can let go of the button to stop whistling. If the button is held all the way, the maximum duration of each state of the whistle is different depending on the game and framerate. The following states can be noted:

After all this, the leader finally returns to normal. The final state only exists in the first Pikmin game, and in Pikmin 3, when the whistle is at its maximum radius, it also starts growing vertically. The following table lists the maximum duration of each state. To note is that none of the upgrades affect these times. 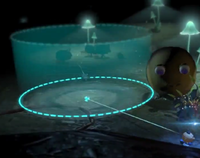 Alph calling Pikmin back with his whistle in Pikmin 3.

Visually, when using the whistle, some manner of circular shape will appear around the focus point, in order to indicate the area of reach. The whistle's graphical representation depends on the game. In Pikmin and Pikmin 2, a spectrum of colored bubbles appears when whistling, rotating around the cursor in a ribbon-like pattern. In Pikmin 3, a blue, digital-like dashed circle appears, and if the cursor is held for longer, a transparent cylindrical column grows into the air and below ground, indicating that the whistle is then reaching Pikmin above and below the cursor, such as Winged Pikmin.

In Pikmin 2, Olimar, Louie, and the President all have different calling whistles and swarming fanfares, but share the same dismiss whistle. Olimar's whistles sound like a normal pea whistle, Louies' resemble a toy train whistle, and the Presidents' resemble a car's horn. In Pikmin 3, whistles are physically integrated into the helmet of every leader's spacesuit. With two exceptions, they sound the same for all characters and players: a regular pea whistle like Olimar's. In Bingo Battle, player 2's whistle will instead always sound like Louie's whistle from Pikmin 2, and in Pikmin 3 Deluxe, Louie's whistle was changed to sound like his Pikmin 2 whistle.

Sometimes, the whistle is limited to prevent the player from breaking the game's normal flow. This happens in Pikmin 2 where leaders in day 1 cannot whistle each other or the other Pikmin until they reunite. It's also impossible to whistle Blue Pikmin before getting Yellow Pikmin, in New Play Control! Pikmin 2 exclusively.

In Pikmin 2, the following treasures, when collected, improve the whistle's capabilities:

In Pikmin 3 Deluxe, the player can interact with the S.S. Drake in order to call out a loud whistle that rings across the area. This whistle forces all Pikmin to stop what they are doing and return to the landing site.

The whistle in Hey! Pikmin works differently from the whistle in the main games in the series. There is a button on the touch screen, and when the player wants to use the whistle, they must tap it. The whistle will only work if Olimar is idling (on the ground, or even when on a vine, underwater, etc.), or is walking. Upon being used, a voice will be heard saying "Hey!", although it doesn't seem to match Olimar's voice. The pitch of this sound clip is also randomized. After a small delay, Olimar will blow his whistle proper. The whistle is normal-pitched in most circumstances, but high-pitched if the Pikmin around are in danger of dying.

When used, all Pikmin that are on-screen and are not carrying something will run to Olimar's side. This is the player's way of calling new Pikmin hiding behind objects like bushes, as well as the main way to get them to return to the captain when they are fighting. It can also be used to force Pikmin that are casually walking to Olimar to run instead, meaning one can blow the whistle to get Pikmin to run away from danger much faster.

There are different commands that leaders can do that also play whistle sounds. Pikmin can be separated intro groups of their own type with a simple dismiss command. With the Dodge Whistle collected, leaders in Pikmin 3 can dodge and sound a whistle to order their squad to do the same. Albeit not directly related to the whistle, it is also possible to swarm the group, which plays a jingle, as well as to charge, which sounds a horn.

Antenna Beetles are also capable of sounding something similar to a whistle, which captures all Pikmin in range and temporarily puts them in the creature's control.

In Pikmin Bloom, there is a whistle button in the lower right corner of some screens, and it makes a whistle noise when tapped. Tapping it on the map screen makes the Mii blow a whistle and enters the garden screen. Tapping it in the garden screen startles the squad of Pikmin and makes them face the player. Holding the button down makes them all line in up together. Triple-tapping it makes all Pikmin carrying things deliver them immediately, and swaps all the other Pikmin from the current squad with different Pikmin.

or tapping the call icon on the Wii U GamePad will cause the Mii controlling Captain Olimar to whistle all Pikmin – including the other player Pikmin – to him. This will cause all player Pikmin to stack on top of Olimar's head, which Olimar can now throw at enemies or other obstacles. Pikmin can refuse being called by shaking the Wii Remote. Much like in the Super Smash Bros. games, Pikmin can be called from anywhere. 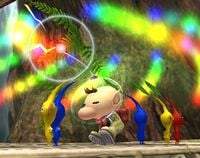 In the Super Smash Bros. series, Olimar's down special move is called Pikmin Order. When used, Olimar briefly blows his whistle around him. Any Pikmin that are stranded will quickly jump back next to Olimar, regardless of their distance to the leader. Then, all the Pikmin are grouped by type. If this move is used while they are already grouped, it'll send the next group to the back of the line. Interestingly, this move has some super armor frames, which means that, with good timing, one can use this move and suffer no knockback from powerful attacks or even Final Smashes.