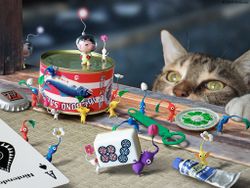 What will the future of the Pikmin be?

My name is Joshua, but I prefer Josh, I come from the PAL regions (UK). My Pikmin 3 ideas related to: Pikmin, Enemies, Hazards and Sprays are here. Pikmin 3 Area/Plot ideas; here.

I'm a massive fan of art and video games, and do both in my spare time, I have an intrest in japanese culture and can speak some as well along with french and a bit of spanish. I also like astronomy, such as outer space and class myself as a amateur astronomer. I did a IQ on the internet and it said I have an IQ of 121.

Thanks to User:Crystal lucario for making my sig and User:Snakeboss14 for my friend userbox!

if you are my friend

Brawl wise i'll happily brawl anyone, im not that good, and I played it was over 6 months ago, so... Im more active 3-7:00pm UK time, which is around 10-11:00am/12:00pm for NA. So americans, I can't brawl in you're afternoon, as it's my night for me and that's the same the other way around. My friend code is in the userbox section; if you have brawl use this to display you're code and mains.