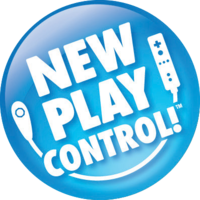 The New Play Control! (Wiiであそぶ?, lit.: "Let's Play On Wii") range of video games is a collection of GameCube titles ported to the Wii, with their controls altered for play on the newer console. Normally, some minor tweaks are also made. During a Nintendo press conference in October 2008, the games were announced, along with the details that the range includes the two Pikmin games[1]:

Some unused strings inside the two New Play Control! titles suggest that, initially, both games were meant to be included in a single disc, with the tentative title Pikmin 1 and 2 on Wii. In addition, there is a folder named pikmin12 in both games, and contains mostly the same data, which is exclusive to the New Play Control! version of each respective game. The following string in /pikmin12/EngEU/message/pik12message.bmg details the title and what is likely the blurb on the Wii's saved game management system:

The idea would be similar to the likes of Metroid Prime: Trilogy, but it was ultimately canceled, with Nintendo instead making each game be on a separate disc.