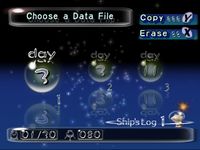 A saved game (also known as a save game or simply save) is a record on the progress a player has made on a game thus far, which allows them to stop playing and later return to the point whence they left off. In the first two Pikmin games, there are two types of information saved: a trio of playthrough progress slots and the global progress data. In Pikmin 3, there is only one playthrough slot in a Wii U user account, however, in Pikmin 3 Deluxe, 3 save file slots were added to Story Mode.

The playthrough progress is a record that contains the progress made in the main adventure mode. This includes information such as the current day, the number of Pikmin of each type, and the collected ship parts, treasures or fruits. In the first two games, up to three individual records may be kept, allowing three different players to keep their own progress through the main adventure mode. These records can be deleted or copied from one slot to another.

The global progress contains data about the progress of the game's content outside of the main story mode. As such, this record is updated regardless of which story mode slot is used, and for extra game modes such as Challenge Mode, that do not have a specific playthrough slot attached. Examples of the information saved in this record are the high scores, Challenge Mode completion and records, unlocked bonuses and the settings in the options menu.

In Hey! Pikmin, there again can be up to 3 different saved games at a time. However, since there are no alternative game modes, the only global data that gets saved is the settings in the options menu.

In order for this information to be persistently saved between system boots, it must be stored somewhere. This location depends on the system. For the GameCube original games, the information must be stored in a memory card. The Pikmin games only read and write to the memory card in slot A. If a memory card cannot be used when the game needs to load or save, it will display a warning notifying the player that the memory card is invalid; it will also specify the exact reason of the error, be it because the memory card is full, corrupted, or even absent altogether. If these GameCube games are played on a Wii console, the same rules still apply. All information takes on the form of a single file of data inside the memory card, meaning the three playthrough progresses and the global progress are kept in the same place. These save files can be managed on the GameCube's system menu, by copying or moving the files between memory cards, or deleting them completely. The saved data in Pikmin is worth 19 blocks on the memory card, and the one in Pikmin 2 is worth 27. 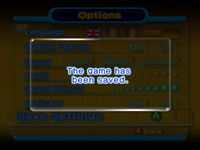 The game notifying the player of a successful save, on Pikmin 2's options menu.

In the first two Pikmin games, whenever the game needs to be saved, a prompt appears asking the player if they wish to save the game; exceptions exist, detailed below. The player has the option to refuse the save operation – this is useful should the player have a bad day and not wish to keep it; the player can refuse the save and return to the saved game selection menu in order to re-load their progress and try again. Interestingly, the games also ask the player if they can save a new score at the end of a Challenge Mode level.

Saves are done at the following times:

The only times a game saves without asking, besides Pikmin 3, which never asks, are in Pikmin, when the options are changed, and in Pikmin 2, when a player enters a cave or sublevel. The exact reason for the latter is unknown, but it could be related to the cave's random method of generation not always delivering a fair layout. This allows the players to reset the console and retry the same sublevel with a different layout, as opposed to restarting the entire day. Because having the game ask to save at each sublevel would become annoying to the player, the save was made automatic. An unused setting inside the game's files makes the game ask each time, instead of saving automatically. The automatic saving can be bypassed by removing the memory card in slot A on the GameCube games, at which point the game will warn that it could not save, and give the player the option to continue without saving. As a result, this method is not possible in the New Play Control! remakes. In Pikmin 2, going through the messages that appear when the memory card is absent is faster than waiting for the game to save.[1]

The screen shown when the game is saved in Pikmin 3.

These bits of information get saved for each playthrough:

All points besides the first two are also saved on a per-day basis in New Play Control! Pikmin; this allows the player to go back and retry a previous day.

The following data gets saved globally:

Pikmin 2 saves the following information for each playthrough:

The following information is saved globally:

The game saves the following information:

It is possible for saved games to become corrupt. The reasons for this are not well known. Sometimes, the data can actually be repaired, but other times, it is too corrupted to be recovered, leaving the player with no option but to clear the save data and start from scratch. There are reports of Pikmin save files becoming corrupt, and the game's attempts at repairing them leading to incorrect data.[2][3][4] Effects include area objects in the wrong spots, and insane Pikmin, day, and ship part counts.

Inside the games, no name is given for the concept of a record of persistent information. The playthrough progress slots are however given an identification in Pikmin and Pikmin 2. On the saved game selection menu in Pikmin, a message at the top says "Choose a Data File", and on the bottom-right, as well as on the day results menu, the playthrough progress slot is given the name "Ship's Log", followed by the respective slot number. Pikmin 2 also calls these slots "Ship's Log", but never "Data File". In addition, because there is only one slot in Pikmin 3, the concept of a slot does not exist. To make matters more confusing, Pikmin 3 introduced gameplay objects known as data files.

Because of the lack of consensus between the games, and because of the ambiguity that could've stemmed from the name "data file", it was decided that, on the wiki, the concept of a record of progress in the games would be known as a "saved game", especially given that it is the most well-known term in the video game industry.