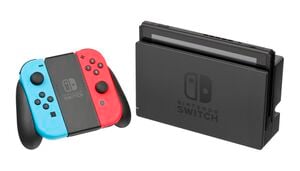 The Nintendo Switch console, featuring the dock, the screen, and the Joy-Con controllers connected to the Joy-Con grip. 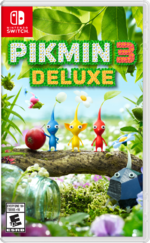 Pikmin 4 is an upcoming Pikmin title for the Nintendo Switch. 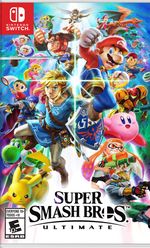 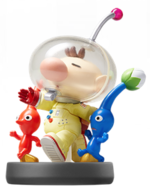 The Olimar amiibo has functionality with some Nintendo Switch games. For instance, in Mario Kart 8 Deluxe it unlocks an Olimar-themed costume, and in Super Mario Odyssey, Uncle amiibo will recognize the Pikmin amiibo specifically.

When creating a Nintendo Switch account in the console, the user can choose their avatar from a selection, from which 3 Pikmin avatars exist: one of a running Red Pikmin, one of a tripping Blue Pikmin, and one of a Yellow Pikmin peeking from the bottom. The background color of the icons can be changed independently.

The Switch's primary feature is its ability to switch functionalities between home console and handheld device. The main unit itself is a tablet-like device, featuring a 6.2 inch capacitive multi-touch screen. The main unit contains a 3.3mm headphone jack, a slot for game cards, a USB-C charger port, a kickstand on the back, and a micro SD card slot, which is located underneath the kickstand. Packaged with the main unit is a docking station, which features an AC adapter cable, an HDMI port, two USB2.0 ports, and one USB3.0 port.

When the main unit is docked into the station, video output is switched from the handheld portion's screen to the TV screen, and the console's internal processor's power output is increased, allowing the user to play their games in a more home console-like experience. At any time, the player can simply remove the main unit from the docking station to seamlessly transfer their game experience back into a handheld mode. Undocked, the main unit has a battery life that changes depending on the game one is playing, ranging from anywhere between 2.5 hours to 6 hours.

The console's controllers come in the form of two detachable controller halves, collectively called "Joy-Cons"; specifically the Joy-Con L and Joy-Con R. Both Joy-Cons each contain four face buttons, a clickable analogue joystick, one bumper and trigger, and two additional buttons inside the railing that act as shoulder buttons while being held horizontally. The Joy-Con R features an IR sensor and NFC reader, while the Joy-Con L has a dedicated button for taking screenshots, and will be able to record video at a later date. They can be attached to the sides of the Switch unit, used in conjunction as a traditional controller using a grip, used separately in each hand like a Wii Remote and Nunchuk, or may each be used as a standalone controller, allowing for two individuals to play multiplayer games with a single pair of Joy-Cons. They also include Nintendo's patented haptic feedback technology, titled "HD Rumble", to help convey realistic sensations to the users. Each Joy-Con has a battery life of 20 hours.