A Mii is a user-created avatar used in many Nintendo games since their introduction on the Wii system. They are generated through facial assets picked and arranged by the player, with some later systems allowing them to be generated through a photograph. These Miis are often used as the player's character in whichever game they are picked for, and are encouraged to be caricatures of the players themselves. There are some games that largely focus on Miis and allow them to express themselves without player input, most notably Tomodachi Life, Miitomo, Miitopia, and the Wii-branded games.

Mii characters appear in Pikmin Bloom. The player can create these Miis in the app or link a Mii from their MyNintendo accounts, and then dress them in a selection of outfits.

They play a similar role to leaders in the main series of games. As they walk around, they are followed by the squad of Pikmin, and the Mii also controls the whistle, sends Pikmin on expeditions, and controls flower planting. When observing the Pikmin squad in the garden screen, the camera changes to the Mii's perspective.

Like most games Miis are featured in, they simply serve as the player's avatar and do not act on their own or speak. Because of this, it's implied these are actually the player's actions expressed through the Mii and not the Mii themselves.

Pikmin Bloom has a small Mii editor in the game. It only has a handful of choices for face style (which includes hairstyle, eye shape, eyebrow shape, nose shape, and mouth shape, and an option for skin color), hair color, eye color, and attire. If a MyNintendo account is linked, the Mii will use the appearance of the Mii tied to the account instead. MyNintendo account Miis have many more customization options, and can be created on a linked Nintendo system's Mii Maker app.

Originally, there were several preset Mii outfits that the player could choose from. Since the 50.0 update, it has been possible to change individual items of clothing. Since the 55.0 update, clothes are no longer bought from the shop but are instead bought directly from the Mii editor.

Clothes with no name listed were never purchasable individually, and since the name of a piece of clothing can only be seen when buying it, it's not possible to know what they're called.

These sets of clothing are prepared automatically, and use tops, bottoms, dresses, legwear, shoes, outerwear, and/or hats. The hat, legwear, and shoes are not shown in the preview images.

These items are like outfits, except they do not come with individual parts; the whole outfit must be worn as a unit. 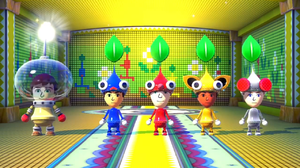 The Miis dressed up as Olimar and Pikmin.

As with all games in Nintendo Land, Miis are the only playable characters, and they roleplay as the original characters from each game's respective franchise. They can also be found populating the hub world delivering various user-created messages from Miiverse.

In Pikmin Adventure, the first player's Mii (the player who holds the Wii U Gamepad) takes the role of Captain Olimar, who has a squad of Pikmin. Up to 4 subsequent players can become individual Pikmin. In ascending order, the players become Blue Pikmin, Red Pikmin, Yellow Pikmin and White Pikmin. The players are tasked to escape each level before time runs out while defeating Dark Monita's enemies. Like with the rest of Nintendo Land, however, the world and creatures are all fabricated for the Mii characters, much like a real world theme park.