The KopPad (GPAD in Japanese) is a menu in Pikmin 3 with various functions. It can be used to view the radar, see information about the world, and even take photos. In-universe, it is a device physically used by the leaders, and looks very similar to the Wii U GamePad. In the original Pikmin 3, the GamePad represents this device and all its functions take place on the controller; in Pikmin 3 Deluxe, its functions take place on the main screen.

The KopPad's main use is in Story Mode, where it has 5 apps (6 in Deluxe) that each have different functions. In Mission Mode and Bingo Battle, the KopPad can also be used, but it is more limited. In the latter, it has no extra apps at all, and only shows the map.

The KopPad can be personalized, as its screen rim color matches that of their owner: Alph's is blue, Brittany's is pink, and Charlie's is green. The device is used in cutscenes to receive calls from other leaders and the S.S. Drake. At the beginning of the game after crash-landing on the planet, Alph is separated from his KopPad. As a result, the player cannot use it until after the first bridge is built.

The GamePad displaying the KopPad HUD.

Besides allowing audio and video communication between leaders and the S.S. Drake, the KopPad also allows the explorers to read data files, get terrain and Pikmin info, store data on fruits, and take pictures of the environment. For these latter purposes, the KopPad comes equipped with installable apps. Each app has an icon on the KopPad touchscreen that can be tapped to open the respective app. Some apps are installed at certain points in the game (at which point they are installed to all explorers' KopPads simultaneously), and uninstalled apps appear with a × symbol on their icon. If new content was added to an app, the word "NEW" will appear under its icon. The five icons are as follows:

Depending on the control scheme, the KopPad can be always enabled, or enabled on command. With Off-TV Play off, the player sees the main action happening on the TV screen, and the GamePad showing the KopPad's screen, with the map app opened. This app updates in real time as the gameplay takes place. If the player interacts with the GamePad's screen, the gameplay will pause, and provided they didn't switch apps, full control over the map app will take place. When the gameplay is paused, a pause symbol briefly appears on the pad's screen. 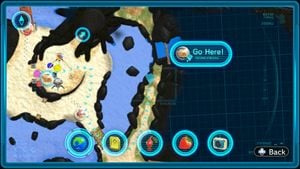 The radar app, with Charlie ready to "Go Here!"

The radar is the default app on the KopPad, and is always enabled if the player has Off-TV Play off. It provides a map of the area, stylized so that water, terrain, structures, and boundary walls are high-contrast and easy to distinguish. It has a static level of zoom, and by default, the map is centered on the active leader.

The Exploration Notes are a collection of all data files found. The 120 data files are divided into six categories on this menu. This app is installed after one data file is recovered. If a category has no unlocked data files, it merely appears as an × symbol.

A screenshot of the completed Fruit File.

The Fruit File is the fourth app on the KopPad. It is installed after the first fruit is recovered, and lists the types and amount of all collected fruits up to this point, sorted by order of collection. Tapping on a fruit will show its name, the amount of juice it's worth, how many of it have been collected, how many Pikmin are needed to carry it, Brittany's notes and finally, if the fruit radar has been unlocked, how many of this type of fruit there are in the game. The file for a fruit becomes available to view when the first specimen of that fruit is first juiced (including the first piece in a bundle of fruit, like the Dawn Pustules).

When the fruit radar is unlocked, the total number of existing pieces of fruit is also displayed, and the total of instances of each fruit also appears in the file. A star on the top-right corner of each cell indicates all existing samples of that fruit have been collected.

A screenshot of the complete Piklopedia.

The Piklopedia shows all of the enemies that the player has beaten so far. There are 55 entries in the Piklopedia, with each enemy getting its own entry. Inside each entry, the player can find comments on the enemy from each leader, a short video of the enemy in action, the areas the enemy can be found, and how many have been killed throughout all Story Mode playthroughs. The Piklopedia is only found in Pikmin 3 Deluxe.

The Pikmin Info screen shows statistics about the Pikmin count. The top of the screen enumerates how many Pikmin there are of each type inside the Onion, as well as on the field (idle or not). The total number of Pikmin on the Onion and the total on the field are also present.

By opening the camera app, the player can use the GamePad much like they would use a real camera. The GamePad's screen shows the scenery from the view of the leader, holding the KopPad like a camera. As the player rotates and moves the GamePad, the changes are reflected in what's displayed on the screen. (In Pikmin 3 Deluxe, the player uses the joystick, rather than motion.) With this, the player can view the action from another perspective, and gain visual access to otherwise invisible details, such as the hidden murals. While it is not possible to walk manually while holding the camera, it is possible to use the camera on a leader under the Go Here! command.

On top of allowing a pseudo-first person view, this camera also allows the player to take images and share them on Miiverse.

can be used to zoom in and out, with the default level of zoom being 1.3×, the minimum being 1.0×, and the maximum being 3.0×. Touching a part of the frame will cause anything at that distance to focus, and scenery at other distances to become blurred; naturally, the farther it is, the further it blurs.

toggles the flash function. With it enabled, pictures will be taken with flash. This can be useful to lighten up otherwise dark pictures. Interestingly, the flash also causes an eyeshine effect on Bulborbs, and most other creatures.

takes a picture. Before Miiverse's shutdown, users could create a post about this picture, as detailed here. Pictures that are taken, whether they are posted on Miiverse or not, also have a chance of appearing on the area selection screen, when the area they were taken in is highlighted.

If one opens the camera underwater, sound become muffled, and some underwater sounds will play, in order to sell the idea that the player is underwater, same as the leader they are controlling.

In Pikmin 3 Deluxe, there are three badges the player can gain from use of the KopPad:

The device's name is a portmanteau of Koppai and GamePad. The Japanese version's name is GPAD, a shortening of GamePad. This name is also engraved onto the device, but written in Koppaite text (

). In earlier versions of the game, this engraving had the text

(PPAD), and the Koppaite text that can be seen on the lock-on view calls the KopPad

(PIPAD). These aspects indicate that a tentative name for the device was "PIPAD", with the "PI" perhaps being short for "Pikmin".