amiibo are a line of interactive toys created by Nintendo, with the intent of being usable in some Nintendo games. For this, they use the near-field communication chip installed on their bottom, which can be scanned by the Wii U, the Nintendo 3DS, and the Nintendo Switch's NFC readers. Some games read the amiibo and do something in-game related to the amiibo's character, but there are games that only have one action, regardless of what amiibo the player uses. On top of that, some games simply read the data on the amiibo, while others can read and write to it.

So far, only two Pikmin-related amiibo have been released: one of Captain Olimar, as he is shown in Super Smash Bros. for Nintendo 3DS and Wii U, and the other of a group of five Pikmin.

This article will only list games that do some specific action related to the Pikmin series amiibo used. For a full list of games, including those that do not do anything specific with these amiibo, see Nintendo's website. 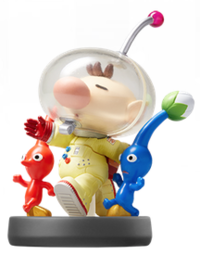 Because it is based on the Super Smash Bros. fighter, he and the Pikmin look like they do in Super Smash Bros. for Nintendo 3DS and Wii U. In particular, they highly resemble the official artwork for Olimar. Olimar himself is in the center, and there is a bud Blue Pikmin to his left, a leaf Red Pikmin to his right, and a flower Yellow Pikmin behind him, to his right.

Listed are the games in which the Olimar amiibo provides unique content. Usually, the content is inspired by the Pikmin series. There are many other games the Olimar amiibo can be used in, but its functionality behaves no differently from any other amiibo.

“Captain Olimar is a veteran spaceship pilot and the main character of the Pikmin™ series. After crash-landing on an enigmatic planet, Olimar met the mysterious and tiny beings known as Pikmin. He enlisted their aid to recover his spaceship parts, battle monstrous enemies, and help him escape. Recently, Olimar’s even been spotted teaming up with Pikmin in wild and frenetic matches of something called Bingo Battle!” – The Olimar amiibo official webpage 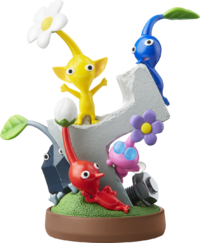 This amiibo is the first and only one from the Pikmin amiibo series. It was released alongside Hey! Pikmin on July 13th in Japan, and July 28th everywhere else. It features the Red, Yellow, Blue, Rock, and Winged Pikmin types. They are resting on what appears to be concrete with grass and a screw on the base of the figure. The is the second amiibo to feature the Red, Yellow, and Blue Pikmin, but the first to feature the Rock and Winged.

Yoshi's Woolly World, Kirby: Planet Robobot and – despite the inclusion of a Pikmin costume – Super Mario Maker do not specifically recognize the Pikmin amiibo, unlike the Olimar amiibo.

“Named after the Pikpik carrots from Captain Olimar's home planet, Pikmin™ are tiny, curious creatures that come in multiple types. Each type of Pikmin has their own unique abilities to help Olimar on his adventures.” – The Pikmin amiibo official webpage

Hey! Pikmin is compatible with some released amiibo, even outside of the two Pikmin-related amiibo. Scanning the Olimar amiibo or the Pikmin amiibo mid-level will summon Pikmin to help the player. Scanning the two Pikmin-related amiibo, or amiibo from the Mario series, Animal Crossing series, or Splatoon series on the area selection screen will also unlock Secret Spots with those amiibo as treasures.