Yellow Pikmin (黄ピクミン?) are a yellow species of Pikmin, with the special abilities of increased throw height, bomb-rock carrying (in Pikmin), and electricity resistance. They are the second type discovered by Captain Olimar in Pikmin, the fourth type identified in Pikmin 2, and they're first found with Charlie in Pikmin 3. These Pikmin have what would appear to be large ears; these are the means by which they are primarily identifiable. It is not known, however, whether or not this actually aids their hearing. Yellow Pikmin can be thrown higher – an ability that is needed to retrieve certain elevated ship parts, treasures and fruits – and are immune to electricity. Additionally, Yellow Pikmin appear to like being in elevated places, such as trees – this can be concluded from the places they are first found in Pikmin 2 and Pikmin 3. Their main method of production is through the Yellow Onion (or the Master Onion), and like Red Pikmin, Blue Pikmin, and Bulbmin, their buds and flowers are white. Like Red Pikmin and Blue Pikmin, they appear in all games of the series, and in all game modes.

Yellow Pikmin seem to have varying abilities that either change or get discovered as time goes on. In all three games, they have large ears, and can be thrown higher than other Pikmin, which is used at times throughout the games. In Pikmin, Yellow Pikmin are the only ones able to wield bomb-rocks, for whatever reason. Digging into the game's files has revealed that all Pikmin were originally supposed to be able to wield bomb-rocks.[2] Because of the rare circumstances in which these Pikmin are needed, they are arguably the least useful type in the first game.

In Pikmin 2, the electrical hazards surface, with Yellow Pikmin now being immune to them (alongside Bulbmin). Additionally, when Olimar discovers the Yellow Pikmin, the Hocotate ship states that the static electricity readings are high. The explanation for this is never revealed, either. Although bomb-rocks appear in the same game, Yellow Pikmin are unable to use them, possibly due to the objects being much larger. Their immunity to electric hazards is very helpful, as electricity is an otherwise instant-death hazard.

In Pikmin, a single Yellow Pikmin can be found in The Forest of Hope inside a dormant Yellow Onion. The Onion is located near a few Spotty Bulborbs and yellow pellets. It can be seen from the landing site, and is at the west of the map, beyond the area with the Eternal Fuel Dynamo. When the Onion awakens, it spits out the seed it has. Olimar uses this to grow more, eventually discovers their ability to handle bomb-rocks from the explosives nearby, and uses them to clear the path to various other ship parts.

There is no task in the game that mandatorily requires Yellow Pikmin. Although only their bomb-rocks can be used to take down reinforced walls, all of the walls in the way of ship parts can be circumvented in other ways. Those, and other ship parts that would normally require Yellow Pikmin, are explained in the recommended uses section below.

Although not mandatory, Yellow Pikmin are important in the collection of the following ship parts. 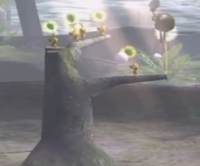 The Yellow Pikmin resting on a tree in Pikmin 2.

In Pikmin 2, a group of five Yellow Pikmin are found in the Perplexing Pool near the center of the map, at the end of a long and twisted path; White Pikmin are necessary just to reach them, and a Fiery Bulblax guards the entrance to their Onion. They are found relaxing on top of a tree, and exhibit static electricity flowing from their bodies on their discovery cutscene, which is triggered after they are whistled down from their spot. The Hocotate ship states that the static electricity readings are "unusually high".

There is no task in Pikmin 2 that requires Yellow Pikmin exclusively. Even if Yellow Pikmin are required to destroy electric gates, none need to be taken down for a full completion. All treasures can be collected with other Pikmin types with the use of exploits, detailed in the recommended uses section below.

Although not mandatory, Yellow Pikmin are important in the completion of the following tasks.

In Pikmin 3, Yellow Pikmin are first encountered by Captain Charlie on day 1, at the Distant Tundra, with some of them idling atop some tree branches. However, they are not officially introduced as Yellow Pikmin yet. After helping him for a bit, they flee when he faces the Vehemoth Phosbat. Later on, when going to the Distant Tundra for the first time with Alph and Brittany, Brittany falls out of the ship and into a cave (which consequently separates her from Alph). She finds two Yellow Pikmin trying to complete a circuit in the cave. The player must pluck three buried Yellow Pikmin nearby to complete the circuit; upon doing so, a light-bulb is activated, causing the Yellow Onion to fly up out of the ground. Brittany then uses the newly discovered Pikmin type to reunite with Alph.

Yellow Pikmin must be used in order to collect the following fruits and defeat the following enemies, and there are no glitches or exploits that allow other Pikmin types to do so.

Yellow Pikmin are intended to be used to complete these tasks, but through the use of glitches, exploits, or tricks, the tasks can be completed without Yellow Pikmin.

Although not mandatory, Yellow Pikmin are important in the completion of the following tasks.

In Pikmin Bloom, Yellow Pikmin are the second type obtained, and are unlocked at level 4. They have no special features, being a standard type that can carry 1 weight unit and deals 4 base damage in mushroom challenges. Their seedlings take the strength of 1 Pikmin to carry and 1000 steps to grow.

“Their ears may be big, but their bones are very light, so they can be thrown to great heights where other Pikmin can't reach. Their other unique strength is the ability to shrug off anything that can shock or zap them.”

“Their ears may be big, but their bones are very light, so they can be thrown to great heights that other Pikmin can't reach. Their other unique strength is the ability to shrug off anything that can shock or zap them.”

“Yellow Pikmin have ear-like membranes on the sides of their heads, and they love electricity so much you can sometimes hear them buzzing.”

Yellow Pikmin appear in Super Smash Bros. Brawl and Super Smash Bros. for Nintendo 3DS and Wii U as a trophy, and a kind of Pikmin Olimar can pull from the ground using his Pikmin Pluck special move. Yellow Pikmin, like in Pikmin 2, are immune to electrical moves like Pikachu's Thunder or forward smash, and can attack with electric properties. They are also thrown higher and longer than other Pikmin. In Brawl, a sticker for a Yellow Pikmin also exists.