Super Smash Bros. Ultimate is the fifth and latest entry in the Super Smash Bros. series. Like all games in the series, it features battles between a variety of fighters from Nintendo and non-Nintendo franchises, and this game has more fighters than any previous entry in the series. The game features many Pikmin elements, including a playable fighter, 2 stages, and many minor elements. 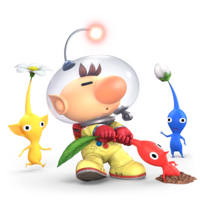 Captain Olimar returns as a fighter. His moveset and appearance seem mostly identical to his Super Smash Bros. for Nintendo 3DS and Wii U incarnation, meaning he can only have 3 Pikmin at a time, uses Winged Pikmin to recover, etc.

Some changes can be observed, however:

Alph is also playable as an alternate costume of Olimar. He plays identically to Olimar.

Olimar, and by extension Alph, can be unlocked by clearing one of these tasks:

Some characters from the series show up as Spirits:

The Burrowing Snagret makes an appearance in this game as an Assist Trophy. When summoned, it will appear from the floor (even go through platforms) near an opponent, and will idle for a second before unleashing three quick stabs towards the opponent. It can peck at the ground or the air. It will then bury back down and reemerge elsewhere, repeating the process. Like other Assist Trophies, it can be KO'd if it takes enough damage. It makes the Burrowing Snagret death sound from Pikmin when it emerges, and also when it is KO'd.

The Hocotate Bomb returns as an item, and acts and looks the same as before.

In World of Light, Captain Charlie's spirit can be found by going west, south, south, and south. When defeated, the caves become available to explore, and Captain Charlie is the one who takes the player's spirits on the expedition inside the cave.