Blue Pikmin (青ピクミン?) are a blue species of Pikmin that reside on PNF-404. They have the special ability of water resistance. This type of Pikmin is present in all game modes of all Pikmin games, and is the last type to be discovered in the Story mode of Pikmin, Pikmin 2, and Pikmin 3. Besides their coloration, these Pikmin are distinguishable from other Pikmin species by their pink mouths, a trait seen in no other Pikmin species. These mouths are used to take in water, which filters oxygen through gills, giving them the ability to breathe both underwater and on dry land. Producing more Blue Pikmin can be done by carrying pellets or enemy carcasses to the Blue Onion (or the Master Onion), or by throwing other species into a Lapis Lazuli Candypop Bud. As with Red Pikmin, Yellow Pikmin and Bulbmin, their buds and flowers are white.

The exact location of their gills is not consistently explained in the series, having been said to be on the cheeks,[2][3][4] near the cheeks,[5] on their mouths,[6][7] and not even visible.[8] 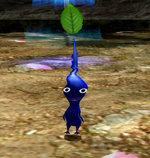 Blue Pikmin being re-discovered in Pikmin 2.

Only Blue Pikmin and Bulbmin can safely traverse watery areas, as any other type will simply flail around in panic before drowning. Winged Pikmin may move and carry objects above the surface of water bodies, but if thrown into water or if hit by droplets fired by enemies, such as the Skeeterskate, they will not be able to swim. While in water, the Blue Pikmin behave almost the same as they do on land. If they are idle and see a nearby Pikmin drowning in water, they will quickly run to them, pick them up, and throw them to shore. However, they will not rescue Pikmin if they are a certain distance away, so they can't always be relied on. At least in Pikmin 2, this throw works the same as a normal leader throw, which means it can be used for things like crushing a Dwarf Bulborb.[9] In Pikmin 3, this rescuing feature was removed, and Blue Pikmin now also have the ability to swim freely while in pursuit, something necessary to reach some enemies that swim above the ground level.

Blue Pikmin seem to be the most balanced Pikmin species; they have average attack power, durability, mobility, digging speed and throw distance. Blue Pikmin have very little utility outside of water, as most enemies that pose water hazards can easily be defeated without Blue Pikmin. Interestingly, Blue Pikmin are more likely to die than other types in Pikmin 2, as noted here.

In Pikmin, Olimar finds the dormant Blue Onion in The Forest Navel, which proves to be a big help in the aquatic area, The Distant Spring. Their Onion is first found near the massive stump holding the Automatic Gear, and is located inside a small pond. Like with the red and yellow Onions, a seed pops out when the Onion wakes up, which Olimar then plucks. The Blue Pikmin's ability to live underwater is immediately demonstrated, since the Onion, the seed, and the new Pikmin appear underwater during this event.

There are glitches and exploits that make it so that Blue Pikmin are not required to collect any ship parts or defeat any enemies. There are two main ones: the object nudging glitch allows one to push ship parts out of the water, while the drowning reset glitch allows Pikmin to travel large bodies of water without drowning. Other minor exploits and glitches include ending the day to make a ship part appear on the closest carrying waypoint in the following day, which can place ship parts in unintended places, and the ability to place a lying Olimar between a treasure and a wall to make him pop up on top of the wall, and going out of bounds.

The following ship parts and enemies are intended to be retrievable or beatable only with Blue Pikmin, but can be done without them using exploits.

In Pikmin 2, 5 Blue Pikmin are found in the Awakening Wood. This is first hinted at when the Onion stops spitting out seeds, but there are only a reported 95 out 100 Pikmin on the field. They are found chasing a few Wogpoles beyond an electric gate guarded by a Cloaking Burrow-nit at the north of the map. To obtain them, Olimar and Louie break down the gate with the Yellow Pikmin, and proceed to whistle them to take them under their command. Once again, their underwater prowesses are instantly noticeable, since they are found in a large lake. 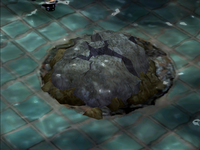 Clogs are used to restrict certain areas to Blue Pikmin.

Blue Pikmin are required to collect these treasures or enter these caves, and there are no glitches or exploits that allow other Pikmin types to do so.

Blue Pikmin are recommended for these treasures, caves, or enemies, though these tasks can be done without the type by using glitches or exploits. 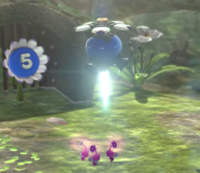 The Blue Onion activating in Pikmin 3.

In Pikmin 3, the Blue Onion is found in the Garden of Hope, but can only be found after Louie has ran away from the Koppaites after being rescued in the Twilight River. The explorers chase after him, but instead find an Onion trapped under a Flukeweed. From this, the Blue Onion is found, and after it ejects a seed that is then plucked, the explorers discover the Blue Pikmin, which prove to be essential in finding Louie again. As with the previous games, the Blue Pikmin are instantly shown to be able to withstand being underwater, since the Onion, seed, and newly-plucked Pikmin are underwater.

Blue Pikmin are meant to be used to obtain numerous different fruits and defeat many enemies, but as a result of Pikmin 3's many glitches and exploits, they are only needed for one objective:

Blue Pikmin are intended to be used to collect these fruits and defeat these enemies, but through the use of glitches, exploits, or tricks, these tasks can be completed without them.

Blue Pikmin are recommended to collect these fruits or defeat these enemies, though these tasks can be done with other types. 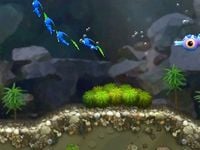 The first appearance of Blue Pikmin in Hey! Pikmin.

In Hey! Pikmin, Blue Pikmin are first found in Foaming Lake, in the second sector, Verdant Waterfront. Whilst Olimar is swimming in the lake a group of Blue Pikmin are chased into a pile of moss by a Puckering Blinnow. Upon whistling at them the Blue Pikmin join Olimar and are used for the majority of each water area from then on, breaking underwater walls and allowing him to progress. After the area is complete they join the Pikmin Park like any other Pikmin type.

Hey! Pikmin does not let players choose which types to bring to a task, and while many treasures require Blue Pikmin to collect, Blue Pikmin will always be present when this is the case.

In the Pikmin Park, plant-type clutter can only be destroyed by Blue Pikmin.

Treasures in areas with Blue Pikmin only 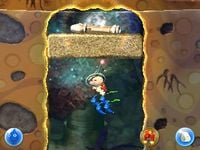 The Scoot-Over Bench in Below the Ice.

Note that indirect uses (using Blue Pikmin to access a later part of the area that contains a treasure that doesn't require Blue Pikmin) are not counted here.

In Pikmin Bloom, Blue Pikmin are the third type obtained, and are unlocked at level 7. They have no special features, being a standard type that can carry 1 weight unit and deals 3 base damage in mushroom challenges. Their seedlings take the strength of 1 Pikmin to carry and 1000 steps to grow.

“Deep in the cave I discovered in the forest, I encountered blue Pikmin. These blue fellows have something resembling gills on their cheeks, and they appear to be amphibious, surviving both in water and on land. The wonders of nature never cease to stun me, even in this alien land!”

“This variety of Pikmin thrives in the water. I can't see gills on them, but they must be there. (Probably?) My suit ensures water isn't a danger to me either, but that's not true of the rest of the Pikmin, so I need to be careful.”

“This variety of Pikmin thrives in the water. I can't see gills on them, but they must be there. (Probably?) My suit ensures I can get by in the water too, but that's not true of the rest of the Pikmin, so I need to be careful.”

“Blue Pikmin have special gills that let them breathe underwater. Unsurprisingly, they love the water and are excellent swimmers.”

Blue Pikmin appear in Super Smash Bros. Brawl and Super Smash Bros. for Nintendo 3DS and Wii U as kinds of Pikmin that Olimar can pull from the ground via Pikmin Pluck – his standard special move – as well as trophies. They are the only Pikmin that don't drown in water, and are more durable than other types of Pikmin (besides Purple Pikmin). They also throw opponents the farthest with Olimar's grab attack. They can withstand water moves like Mario's F.L.U.D.D. or Squirtle's water gun. In Brawl, Olimar is most likely to pull up a Blue Pikmin if he is on a water-based surface, such as a cloud or ice.

Blue Pikmin also have a sticker of them in Super Smash Bros. Brawl.