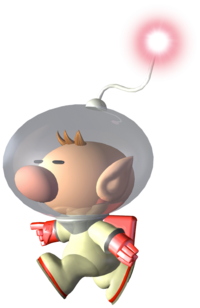 The spacesuits are mandatory for the leaders to survive on PNF-404, and are also their main defense against hazards and enemy attacks. They function much like real-world spacesuits, but have some extra tools that assist the leaders on their exploration trips.

Both Koppaite and Hocotatian spacesuits, along with add-ons like the Anti-Electrifier, Metal Suit Z and the Scorch Guard can be purchased in the "Star Bazaar Catalogue" as mentioned by Alph, Brittany, and Charlie in Pikmin 3. 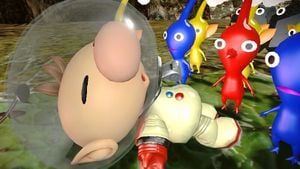 Olimar, under the effects of the "forced sleep" feature.

Given that the leaders cannot breathe the oxygen on PNF-404, a spacesuit is vital for survival, in that it isolates the air the leader takes in, like any other spacesuit. Thanks to this, leaders can also go underwater and stand next to poison without adverse effects. The life-support system every suit comes with is responsible for the leader's safety, but its mechanisms are not known. It is however known that Olimar's life-support system can only sustain him for 30 days in Pikmin.[1]

The suits are what protect the leaders from harm, but they have a set durability, or "health". They will temporarily spark when damage is taken from an enemy or hazard, and the leader's health will decrease. Any damage taken can be regenerated by going to the next morning, entering or leaving a cave, or by standing in the light of the S.S. Dolphin and pressing

in the first game. If a leader is damaged too much, they will become unconscious and the player can continue the day with the remaining leaders.

In Pikmin, Olimar mentions that his life is saved by a "crisis transport system" when his suit health is totally depleted. However, the details of how this system works are never shown; Olimar loses consciousness and wakes up in the beam of the Dolphin, and then struggles into the cockpit, forcing the "end of day" sequence to play as he and the Pikmin return to orbit around PNF-404. This system works even if Olimar is unaccompanied by Pikmin when his health reaches zero, and any Pikmin left in the field will be left behind, thus it can be deduced that this is not merely the work of nearby Pikmin bringing Olimar to safety, like in the lie down mechanic.

The light atop the antenna actually emits some light. This is more noticeable in dark caves, where it is possible to see around the leader. The suits also come with a whistle, sometimes visible, which allows leaders to whistle at things in the terrain. When a leader does so, the antenna will emit rings of light which spread out at the point where the pointer is. Each leader's whistle has a different sound, although in Pikmin 3, all the leaders' whistles make the same sound, and a whistle is integrated into their helmets.

The suits also carry a forced-sleep functionality that makes a leader automatically go to sleep. This is not used in the games, but is part of some plot points in Pikmin 3: after Louie is attacked by the Scornet Maestro, he goes into stasis, which allows him to be carried back to the S.S. Drake. When arriving at the top of the last area, the Formidable Oak, the Koppaites notice Captain Olimar lying unconscious, and Pikmin to carry him to the S.S. Drake. It is revealed in a data file that the Plasm Wraith constantly forces his suit's auto-sleep mode so that Olimar does not escape.[2]

The gloves on the suits seem to be as flexible as real hands, seeing as leaders can use them to reliably punch with them, or grab, throw, and pluck Pikmin. It seems as though removing the helmet is an easy task, as the leaders in Pikmin 3 do it constantly while boarding on the S.S. Drake.

Some add-ons can be integrated with the suits. These are obtained in-game by recovering certain treasures or collectibles. These upgrades unlock new abilities or chance suit characteristics, such as enabling a punch combo or reducing the damage taken. 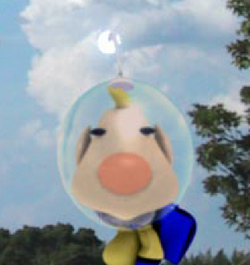 The suits include a completely clear helmet, typically shaped to accommodate the size of the wearer's head, and have an antenna on top with a light on the end. There is a pack affixed to the back of the suit which presumably contains the life-support system, though strangely Louie's pack is just a regular backpack.

The suits can undergo some degree of customization, mostly color-wise. As was mentioned before, the helmets can come in different sizes, but the suits themselves also have different shapes; Brittany's in particular has the bottom of the torso section include a flap that spreads out, making it look like a skirt. The light on top of the antenna, the gloves, the backpack and the feet's soles are normally colored the same as the leader's main color. Each leader's whistle can have a different sound; this both applies to regular whistling and group moving. On top of this, other, minor physical customizations can be made, like the addition of an extra colored streak below the neck, or the inclusion of bracelets; again, this depends on the leader.

Evolution over the series[edit]

In Pikmin, Captain Olimar's spacesuit is quite basic. The suit itself is a rubbery full-body piece, colored in solid cream. It does not carry many details. In Pikmin 2, Olimar's suit barely changed appearance with Louie's looking quite similar, although the introduction of different colors and helmet sizes helped bring out some complexity in these basic suits. On the other hand, The President wears a vastly different-looking suit, instead seemingly being the based on the clothes he's seen wearing on Hocotate but with a helmet, gloves and a pack added.

The characters' style in Super Smash Bros. Brawl involve giving them a more realistic tone to what they are normally seen as in their own series. As a fighter, Captain Olimar received some drastic improvements to his spacesuit's look as a result. It was made to look more leather-based instead of rubbery, and visually, several flabs of tissue and leather-work byproducts, like stitches, can be seen. On top of this, the suit received a Hocotate Freight-related badge on the shoulder, some decorative red dots, and the backpack was also detailed further.

Pikmin 3 accompanied the complexity introduced in Brawl, but to a lesser degree. Most graphical details were decreased in favor of a cleaner look, but the suits were made to look high-tech, flexible, and customizable to each leader's needs and tastes. One of the most noteworthy changes is that the whistle used by leaders was made visible on the helmet itself, as a regular silver pea whistle.

Since the Pikmin Short Movies are based off of Pikmin 2, Olimar's spacesuit has a matching, simple style, but because the shorts are visually enticing and show the leaders and Pikmin from much closer than what is normal in the games, the suit doesn't look as bland as in the original GameCube games. It still looks rubbery, but flabs can be seen more clearly, it features the visible whistle from Pikmin 3, and some of the dots introduced in Brawl were kept, with one of them being made turquoise.

In Super Smash Bros. for Nintendo 3DS and Wii U, a similar look to Super Smash Bros. Brawl is used, but all the details are a bit less noticeable, due to the game's more cartoony appearance. The visible whistle introduced in Pikmin 3 was kept, however.

At one point in Pikmin 2's development, the lights on top of the helmets were considered to emit light colored according to the beacon, instead of regular white light. This can be deduced from some unused lighting configuration files.