From Pikipedia, the Pikmin wiki
(Redirected from AR Card)
Jump to navigation Jump to search 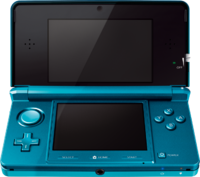 The Nintendo 3DS is a handheld game console developed by Nintendo, released on February 26th, 2011 in Japan, March 27th, 2011 in North America, March 25th, 2011 in Europe, and March 31st, 2011 in Australia. It is the primary successor to the Nintendo DSi, and was first revealed at E3 2010. While the design of both systems are similar, the 3DS features a control-stick style button known as the Circle Pad, and is more powerful internally.

The main gimmick behind the 3DS, like its name suggests, is its ability to display images in stereoscopic 3D without the use of 3D glasses. The top screen is the only one with the 3D feature, while the bottom screen is a touch screen similar to the original DS models. While most games do not incorporate the 3D feature as a gameplay mechanic, it is regardless available for use.

Various variants of the 3DS were released after the original console, creating a family of systems. These include the 3DS XL, with a larger screen, the 2DS, a flat version without the 3D feature, and the New Nintendo 3DS, a slightly upgraded version. Almost all 3DS games work with all models of the system, and it is also backwards compatible, meaning games for the DS and DSi are still playable on the 3DS. 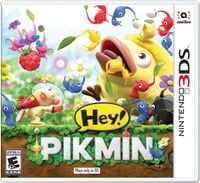 Hey! Pikmin is a spin-off game in the Pikmin series, released in July 2017. This game is a 2D puzzle platformer, unlike the 3D games of the main series. Gameplay takes place across both screens, and the touch screen is used to aim and throw Pikmin around various side-scrolling levels. The game does not support the stereoscopic 3D feature. 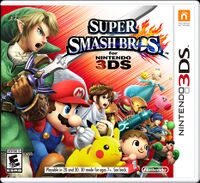 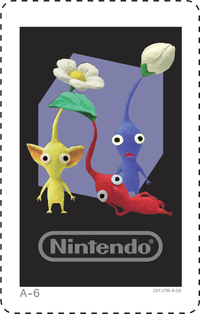 Bundled with the Nintendo 3DS is a pack of AR Cards. These cards can be used in the built-in app AR Games, and in various software that supports AR Cards, like Tomadachi Life. The main use of the cards in AR Games is to take pictures of them in the mini-game Star Photos, where the characters in the cards come to life, in static poses. The player is able to take photos with them and the Question Mark Cube.

One of the cards has a leaf Red Pikmin, a flower Yellow Pikmin, and a bud Blue Pikmin. When scanned into AR Games, the Pikmin are stylized like the ones from Pikmin, and, like the other characters, feature 5 different poses. Interestingly, the third pose shows three Pikmin carrying a 1 pellet, something that is not possible in the games, but possible in various forms of prerelease content and rumors.

The Japanese eShop cards with Pikmin AR Cards bundled in.

In Japan, three Pikmin-themed AR cards came bundled with eShop cards.[1] The Yellow Pikmin card comes bundled with a 1000 Yen card, the Red Pikmin card comes with a 2000 Yen card, and the Blue Pikmin comes with a 3000 Yen card. Each card shows a Pikmin of the same color on it. Along with the Pikmin AR Cards, one could also get a code for Photos with Pikmin or "いっしょにフォト ピクミン?". With the software, AR pictures can be taken. Unlike the bundled AR Cards, these can be freely moved around, and the Pikmin will interact with them accordingly. For example, if the card is held upside down, the Pikmin will hang onto the card before falling down. By blowing into the microphone, more Pikmin can be spawned. Blowing with the maximum amount of Pikmin on the card will turn it into a different whistle. This whistle will organize the Pikmin into lines. One can also set a timer for when they want to take a picture, along with being able to change on-screen effects for the picture. The ? card bundled with the 3DS will show a Bulborb when used with this card set. The Bulborb will chase after the Pikmin if they are close enough. This game and the Japanese Pikmin AR Cards have an official website at https://www.nintendo.co.jp/3ds/dl/jawj/. The cards and software have not been released outside of Japan.

There are three Pikmin-related 3DS themes available on the 3DS Theme Shop. One is called "Pikmin: Working Together" ("Pikmin Working Together" in Europe), and features a picture with the various Pikmin types on top. On the bottom, there is an animated image of various Pikmin working, being followed by a Bulborb. The second is called "Pikmin: A Hungry Bulborb" ("Pikmin and a Hungry Bulborb" in Europe). This theme features many cartoon styled Pikmin on the top screen walking. On the bottom screen is a cartoon-styled Bulborb which will shift its eyes when the cursor on the bottom screen is moved.

The third theme released near the releases of Hey! Pikmin, and is about that same game. It's called "Hey! Pikmin: Adventure Together". The top screen shows the scene from the European boxart, while the bottom screen has a large strip of terrain in a sideways view, with Captain Olimar, Pikmin, and some enemies scattered around. Music from the game plays when this theme is active. It was released in Japan on June 28th, 2017, and in the US in July 13th, 2017.

A fourth theme, called "Pikmin: At Home in the Grass", is available exclusively through Nintendo Badge Arcade. By purchasing two sets of 5 plays in the game during a week that the theme is featured, it can then be downloaded in the Theme Shop at no extra cost. The theme features a mostly green, grassy background with several Pikmin standing near tufts of grass, as well as repeating silhouettes of Pikmin across the upper portion of the top screen. Unlike other themes, it does not include custom sound effects or music.

Captain Olimar and a Red Pikmin can also be seen on the top screen of the theme "Super Smash Bros.: Theme 4".

Pikmin: At Home in the Grass

StreetPass Mii Plaza is a pre-installed app where players use Miis that they have encountered to complete mini-games. One mini-game, Puzzle Swap, requires players to take pieces that they don't have from other players, in order to finish puzzles of various Nintendo characters or games. There are currently 4 Pikmin-themed puzzles on Puzzle Swap. The first is a picture of a Red Pikmin, a Yellow Pikmin, and a Blue Pikmin looking up at the sky. When inspected, the 3D scene shows those Pikmin performing various idle animations from Pikmin and Pikmin 2. The other three puzzles are still-frames from the Pikmin Short Movies.

The player can dress their Mii in a variety of unlockable hats and outfits, including some based on Nintendo characters. A Red Pikmin hat, Blue Pikmin hat, and Yellow Pikmin hat can all be collected by beating various stages in the Find Mii mini-game. An Olimar hat, as well as a Pikmin-themed speech balloon, can be unlocked at the Exchange Booth by trading in Plaza Tickets won in some of the mini-games.

The image tweeted by Nintendo with the release of the Pikmin badges.

Nintendo Badge Arcade (バッジとれ〜るセンター?, lit.: "Collectible Badge Center") is an app for the Nintendo 3DS. It is a crane game in which players must use the crane to grab or knock the badges into the bottom of the screen, awarding the player with said badges to decorate their 3DS Home Menu.

In order to play, players must purchase plays on the Nintendo e-Shop. In the US, 5 plays cost $1.00, and the player is able to purchase bundles of 10, 15, and 20 plays for $2.00, $3.00, and $4.00 respectively. Occasionally, Nintendo would do Free Play giveaways, giving one free play on certain days. Once new badge additions were discontinued on June 22nd, 2017 in the US,[2] the game began to offer two free plays on every day. Another method of getting plays is by playing the daily Practice Catcher. Once the player accumulates 10 practice badges, they get a free play. Some practice badges have blue or red targets on the back of them, giving players 1 or 3 additional free plays respectively.

On May 1st, 2015, Nintendo released a batch of Pikmin badges for the game.[3] The badges include Captain Olimar, Pikmin, and pellets, amongst others.[4] 56 Pikmin badges are available across nine separate sets, including eight "launcher badges", which can be used to launch the various pre-installed apps on the 3DS. The Super Mario Maker category also includes badges of the Captain Olimar and Pikmin sprites from that game.

The Pikmin Short Movies are a set of 3 short animated films featuring Olimar and the Pikmin, released in 2014. The 3DS versions of these movies feature stereoscopic 3D, while the Wii U versions are in high-definition. The software that included these movies also included several pieces of bonus material. The software was removed from the eShop on October 8th, 2020, the day before the high-definition versions were published on YouTube.

Pikmin Safari is a short series where the areas of PNF-404 in Pikmin 3 are explored by Alph and narrated by a man identified as Winston Chumling. It uses many documentary techniques, like switching between close ups of the animals and zoomed out shots of Alph walking. They were released on the Nintendo Video app on the 3DS. There are 3 short documentaries, covering the Garden of Hope, Distant Tundra, and Tropical Wilds.

When transferring downloadable content from DSi to 3DS, or 3DS to 3DS XL, various types of Pikmin are seen "carrying" the data over.

In Pikmin 3's development, the Nintendo DS and later the 3DS were tested as the console the game would be on, but Shigeru Miyamoto wasn't happy with either of these consoles due to their limitations. Eventually, he settled on using the Wii U.[5]