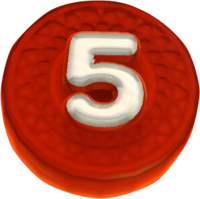 A pellet (ペレット?, lit.: "Pellet") is a crystallized chunk of nectar that contains vitamins and other nutrition. Pellets are used to produce Pikmin, by bringing them to the Onion, and are the main source of seeds at the start of the games, as large creatures require many Pikmin to kill safely.

Pellets come in a variety of sizes, and each one produces a different amount of Pikmin. An Arabic numeral can be seen atop each one, reflecting its weight. Pellets with the numbers 1, 5, 8, 10, and 20 exist. If the color of the pellet matches the color of the Onion it is brought to, that same number of Pikmin is produced (the exception being the number 1, which creates two Pikmin). If not, only half that number, rounded up, will appear.

They are found on the top of Pellet Posies, and sometimes on the ground. Certain creatures of PNF-404 also leave pellets as spoils at times; they have presumably eaten pellets, which could indicate the possibility that the same creatures are herbivores, if not omnivores.

1 pellet
The most common size of pellet and the only kind found on Pellet Posies in Pikmin. If they are brought to the same colored Onion, they produce 2 Pikmin, if not, they produce just 1 Pikmin.

5 pellet
A fairly rare pellet; these are found on the ground or dropped by enemies in Pikmin, but pellet-bearing Pellet Posies debuted with this pellet in Pikmin 2. If they are brought to the same colored Onion, they produce 5 Pikmin, if not, they produce only 3 Pikmin. The Pellet Posies for this plant are only found in the Valley of Repose in Pikmin 2, but are more common in the other games. They can be found in some fixed placed in Pikmin 3, but two of them grow atop the defeated Quaggled Mireclops.

8 pellet
These pellets are exclusive to Hey! Pikmin and are the only kind present in that game. They are obtained as a reward for completing Secret Spots from the area selection screen, and automatically add 8 Pikmin of the corresponding type to Pikmin Park.

10 pellet
These are even rarer, as these are only in significant places in Pikmin, and only four reappearing Pellet Posies with pellets of weight 10 are found in Pikmin 2: three in the Awakening Wood, and one in the Valley of Repose. If they are brought to the same colored Onion, they produce 10 Pikmin, if not, they produce 5 Pikmin in Pikmin and Pikmin 2, or 6 in Pikmin 3. They are also dropped by the Toady Bloyster and the Spotty Bulbear (day 30) in the Perplexing Pool. Finally, it is also dropped by the Fiery Bulblax in the Valley of Repose – the one that holds the Temporal Mechanism – after its treasure has been salvaged. In Pikmin 3, a 10 Pellet Posy is located on the Tropical Wilds, next to the Pyroclasmic Slooches and the Lesser Mock Bottom; it is always red. On the same area, one is found near the Swooping Snitchbug. A blue 10 pellet can also be found on Twilight River, in a pond in the cave with three Juicy Gaggles. There is also a winged 10 pellet on Twilight River, near the Burrowing Snagret. Finally, on The Rustyard (Battle Enemies! version), a rock 10 pellet can be found near a Toady Bloyster.

20 pellet
The rarest of all, these are very large and very difficult to find; in Pikmin 2, there is actually a Pellet Posy for this pellet that regrows, located near the Snagret Hole in the Awakening Wood, which bears the only 20 pellet in the game. In Pikmin, a yellow 20 pellet is found on top of a tree stump, where only Yellow Pikmin can reach it, in The Forest of Hope. There are also 20 pellets of all 3 colors lying around in the back area where the Pearly Clamclamps are at The Impact Site. There are many 20 pellets lying around everywhere throughout Challenge Mode as well. 50 Pikmin maximum can carry a 20 pellet, instead of the normal of exactly twice its weight. If they are brought to the same colored Onion, they produce 20 Pikmin; if not, they produce 10 Pikmin. These pellet types are absent from Pikmin 3.

The following chart lists information about the different sizes of pellet.

There is one color of pellet per main Pikmin type, with the exception of Purple Pikmin, White Pikmin, and Bulbmin, since those do not have an Onion. 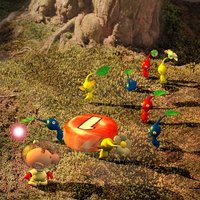 Olimar and some Pikmin carrying a pellet.

At the start of any Pikmin game, all the Pellet Posies are red. Specific-colored pellets can be found lying around in some places, while the rest are inside enemies or atop Pellet Posies.

Some Pellet Posies have pellets with fixed colors. These are normally found next to the Onion where the respective Pikmin type is discovered, although they can exist in other places as well. All other Posies' pellets constantly change color, once every few seconds, between the colors of the Pikmin that have so far been collected, in the following order: red, yellow, blue. Pellets cannot ever be purple or white, or aid in producing Purple or White Pikmin directly. In Pikmin 3, the addition of new Onions adds two more colors to the cycle, now making the order go red, rock, yellow, winged, blue.

To understand what rules determine which Pikmin type out of the carriers gets the pellet, please read the carry article. 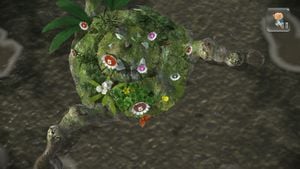 An oddly colored pellet on the back of the Mireclops.

In Pikmin 3, once the day starts, the player can pan the radar around to where some specific multi-colored Pellet Posies are, and by looking at the TV screen, they will be able to see the pellets with atypical colors. This is a result of how Pellet Posies will transition between colors in a very quick gradient rather than instantly. Because it requires the GamePad and TV screen, this phenomenon is not present in Pikmin 3 Deluxe.

These pellet colors are easily seen in that area, but can be seen anywhere if the KopPad is paused at the right frame. If the player presses the "unpause gameplay" button on the top-right corner of the radar, the pellets will instantly turn to normal. Some color-changing Pellet Posies are in sync with one another, so depending on the color of the pellets that use the same cycle, it is possible to know what the color of the transitioning pellet will be, and what color it will turn into if the gameplay is unpaused while on the overhead view: 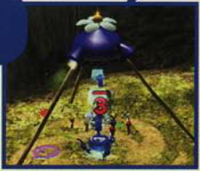 The maximum number of Pikmin that can carry a 1 pellet is two – one on each side. There is however, a bit of a mystery surrounding the ability for three Pikmin to carry a single 1 pellet in the first Pikmin game.

It is very likely that in during development of Pikmin, it was possible for three Pikmin to grab onto the same 1 pellet. This is evidenced by a few things:

That said, there have been reports of a rare glitch that allows a trio of grounded carriers to handle a single pellet.[1] This glitch is currently unconfirmed, and the documented steps to reproduce it include having a Pikmin attack the top of a Pellet Posy while two others attack it from the bottom, timing it so the top Pikmin knocks down the pellet at the same time as the plant gets knocked out by the grounded Pikmin. So far, there has been no evidence of this glitch being executed.

Besides the first Pikmin game on the GameCube, the Pikmin AR Card in AR Games is also related to this phenomenon, since it has a pose with three Pikmin carrying a 1 pellet. Though the Pikmin look like the ones from Pikmin, they don't exactly come from any particular game. In addition, in Pikmin 3, if a varied group of Pikmin is told to charge at a 1 pellet, some Winged Pikmin may lift it while grounded Pikmin are holding it, and the grounded Pikmin will stay latched on for some seconds. Because of the unique carrying mechanics with Winged Pikmin, this can technically make the number of carriers 3 or even 4.

Stickers for a blue pellet and a yellow pellet also exist in Super Smash Bros. Brawl.

The "pellet flowers" referred to in the description are Pellet Posies, yet "pellet grass" is not mentioned in Pikmin or Pikmin 2, making it a mistake on the description writer's part. This could refer to nectar weed, which does not contain pellets, but rather, raw nectar. Flukeweed were introduced to the Pikmin series after Brawl, but these plants often drops pellets and resemble grass. Finally, it could be referring to the Japanese name, ペレット草?, which does translate to "Pellet Grass", but the fact that there's a distinction in the sentence between the "flowers" and the "grass" does not support this.