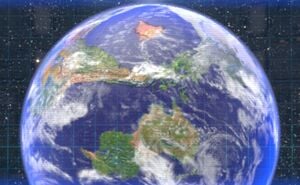 PNF-404 is the main setting of the Pikmin series. In the first two games, the planet lacked a proper official name and was often referred to as the "Planet of the Pikmin" or the "Pikmin Planet". The inhabitants of Koppai named the planet PNF-404 when they discovered it in Pikmin 3. In the Super Smash Bros. series, it is known as "Distant Planet".

In the first Pikmin game, Olimar crash lands on this uncharted planet during his vacation after his ship is struck by an asteroid. Due to the planet's atmosphere being filled with a dangerously high concentration of oxygen, he must escape the planet before his life support system fails.

In Pikmin 2, Olimar returns to the planet with his new companion, Louie, in search of treasure, in order to save Hocotate Freight, the company he works for, from bankruptcy.

In Pikmin 3, the inhabitants of Koppai discover the planet in an attempt to find food on other planets and name it PNF-404. They send Alph, Brittany, and Captain Charlie to the planet to bring back food, in order to save their planet from starvation.

Although ambiguous, PNF-404 is at least very Earth-like, with similar geography and traits. Whether PNF-404 is actually our Earth or an alternate version is yet to be revealed in the games or by Shigeru Miyamoto, the game's creator. Either way, it is doubtful that the similarities are coincidental.

Many of the environments and climates of the areas on PNF-404 resemble terrain on Earth. The areas in the games contain environments that can be found similarly on Earth: forests, rivers, wastelands and tundras are just some of the examples.

Most of the vegetation on PNF-404 also exist on Earth, with some even sharing the names we are familiar with. Most of the charted plants in Pikmin 2 are like this, but some of the background shrubbery is also quite similar to fauna and flora found on Earth. Some of the Pikmin 2 treasures and all of the Pikmin 3 fruits are also objects that exist on Earth, and are described to be much like the ones on our planet.

In the first game, Olimar stated that the atmosphere is composed of oxygen, a component of the air that humans need to breathe, but also an extremely toxic gas in higher concentrations. Despite the fact that no moon is ever seen orbiting the planet in either Pikmin or Pikmin 2, Olimar confirms in one of his voyage logs that the planet does in fact have a "pale white moon".[1] It can be seen in the Pikmin 3 intro cutscene.

Some of the elements found in PNF-404 appear to not be natural, but rather, made by sentient beings. Drawing the parallel with Earth, these objects are very likely made by humans. Tin cans, as well as many other human-made objects and structures from modern times, can be found lying around (for example, parts of Perplexing Pool appear to be the remains of a bathroom, and a Ramune bottle in The Forest Navel), and most of the "treasures" found in the second game are human-made. Nearly all of the treasures in Pikmin 2 and every treasure in Hey! Pikmin are artificial. These even include many items that are registered trademarks of companies on Earth, such as Duracell and 7-Up.

Although treasures are absent in the third game, there are still some objects made by humans scattered across the areas. Although Tropical Wilds is nearly all natural, lots of human-made objects can be found in the Garden of Hope. There are many cinder blocks blocking paths, and some pipes near the southern half, which appears to be the remnants of a bathroom. The whole stage obviously has many flower pots and garden elements, and there is a jump-rope near the entrance to the Quaggled Mireclops's arena. More rusted cans can be found in Distant Tundra, as well as light bulbs and a car battery. There is also a large tomato can in Twilight River near the Puffy Blowhog. Finally, the Data Glutton and Folded Data Glutton are obviously phones made by humans, and the S.S. Drake even calls it an "ancient communication device".

Various obstacles also appear to be made by humans. These include cardboard boxes, paper bags, tin boxes, seesaw blocks, elevator platforms, reinforced walls, dirt walls, electric gates, brick walls, and iron balls. Alph actually comments on a dirt wall saying that it seems to be a "sign of intelligent life," heavily hinting that it was built by humans, which may explain its sandcastle-like shape.

There are many strange creatures seen on the planet throughout the games, most of them being hostile. Perhaps this is an entirely new age where humans have died out and many other creatures have come to coexist. The Geiger Counter is constantly in action, implying that there is strong and constant radiation. That could explain why there are no humans anymore, and also why all creatures on PNF-404 look so different compared to how animals looked when humans were alive. In fact, many creatures resemble evolved or mutated versions of real-world animals, such as Wollywogs and Anode Beetles, which resemble frogs and ladybugs.

In the first two games, PNF-404 is made out to look like present-day Earth. From space, PNF-404's geography appears to match that of Earth's, and the second game more clearly proves this, as when Olimar lands on or leaves the planet, his ship is shown to be heading towards or coming from Africa. The Hocotate ship even states at the time of the discovery of the Spherical Atlas that it exhibits PNF-404's geography as seen from space[2]: both this and the Geographic Projection are two halves to a globe that clearly shows Earth and its countries.

Pikmin 3 seems to retcon that in favor of an entirely new look, with it being heavily based off the scientific hypotheses of how the Earth's surface would look like in 250 million years, known as Pangaea Proxima. Besides being wider, the only major difference is that a small peninsula attached to what would've been Asia in the theory was changed to the island with the Formidable Oak. Almost all of the game's levels are more composed of natural elements rather than man-made remnants, and the small amounts of evidence of humanity left are heavily deteriorated, more-so than in the earlier games, to justify that it has been millions of years after humanity. All of the fruits in the game are based on real fruit, however, many of them are found in places where they wouldn't be able to grow, or with other fruit that they aren't grown near.

Internally, in Pikmin 3, the files for the area selection monitor call the view "Pangaea Ultima" (Pangaeaultima_a.gtx, for instance), which is an alternative name for Pangaea Proxima. Similarly, in Super Smash Bros. Brawl, the Distant Planet stage is referred to by the name "Earth" (STGEARTH, more precisely). These names were only used between developers, and likely used as placeholders, but it makes it clear that the developers see the planet as Earth. 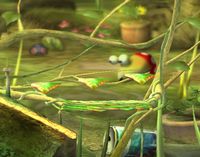 In the Super Smash Bros. series, PNF-404 appears as a stage known as "Distant Planet".

In Super Smash Bros. Brawl, Super Smash Bros. for Nintendo 3DS, and Super Smash Bros. Ultimate, there is a stage named Distant Planet. It features a background similar to the Awakening Wood, while the foreground is consisted of some vines, leaves and a slope. A Red Bulborb occasionally appears on the right side of the screen, which can be stood on. It may open its mouth, and any fighters that fall in are eaten and lose a stock. Another Red Bulborb is found in the background sleeping, but never wakes up. An Onion of a random color drops from the sky at times. Pellet Posies also grow at certain times, and, if hit enough, they'll drop their pellet. If the fighters grab a pellet and throw it at an Onion, items will spawn from it, with the amount depending on the pellet's number (leaving a Pellet Posy alone slowly upgrades it from a 1 to a 5 and then 10) and whether it matches the Onion's color. Damaging an Onion enough will cause it to fly away prematurely.

As with many Smash Bros. stages, a few liberties have been taken from the original source. Firstly, rain pours from time to time, which does not occur in the Pikmin series until Pikmin 3. Secondly, decorative content such as a Super Smash Bros.-themed soda has been added. Finally, the Red Bulborb is much larger in Brawl than in the Pikmin games, at about four or five times the size.

Super Smash Bros. for Wii U also contains a stage from an area in PNF-404. This one is titled exactly the same as the Garden of Hope, and is much more faithful to the actual game area than the arena in the previous games.

The name "PNF-404" fits the nomenclature used by NASA to identify less important planets. The letters and numbers that make up the name, however, have a special meaning: 404 is an HTTP status code that means "Page Not Found".