Like all games, during production, Hey! Pikmin has underwent several different development versions, which did not have the same content that the final game does. Thanks to promotional footage and other sources of information, it is possible to learn how some aspects of the game are different from the final release.

On top of that, there is unused content left inside the game that hints at enemies, objects, etc. that were considered during development, but cut, and never deleted from the game's files. 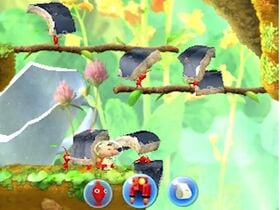 A screenshot from the initial trailer.

Images from the initial September 2016 trailer show the HUD buttons on the bottom screen in the center. In the final game, these are moved to the edges, perhaps to make it harder to press the wrong button accidentally.

The cutscene for when Captain Olimar encounters the Bulborb in the Brilliant Garden is a bit different in promotional videos. When the creature roars in the final game, everyone is on the same level, but in the trailer, Captain Olimar and the Pikmin are on a slightly raised ledge.