Pikmin 3 has a substantial amount of content in its files that goes completely unused, ranging from textures, enemies, and sound files.

There are quite a few unused and unseen standalone textures in Pikmin 3.

There are some unused icons for expressions from Olimar, Louie, and, in Pikmin 3 Deluxe, the President. This also includes icons that are unused in the original Pikmin 3, but are used in Pikmin 3 Deluxe. They are all listed here:

Additionally, there is an equally unused version of Olimar's "mad" icon, with inverted colors and a circle in the top-left. This circle contains a number from 1 to 6 depending on expression, but the base character is the same throughout. The icon character is called playerF internally, where Olimar is playerE and the President's icons refer to him as playerG.

There are five Bingo Battle power-up icons that are not present in the final game.

In the demo of Pikmin 3 Deluxe, there are unused icons for Olimar, Louie, and a SPERO on the mini radar, but go unused due to it not being included in the Side Stories.

In the demo of Pikmin 3 Deluxe, a couple ship part icons are instead placeholders, being red circles with the respective parts' names in white Japanese text.

In Pikmin 3 Deluxe, there are several unused badge textures that appear to be placeholders, starting from 1 to 50.

There are two textures for what appears to be an early version of the first Bulborb data file.

There are two unused test images in Pikmin 3 Deluxe's files that have no use in-game. One shows what appears to be the Flower Garden results screen, but with two layers of white Japanese text with a red outline. The other has three squares in a format similar to the Side Stories menu, and the roughly translated paragraph mentions The Night Juicer, implying this would contain the three Pikmin Short Movies. It also has the same message as the second layer of text on the first one superimposed onto it. 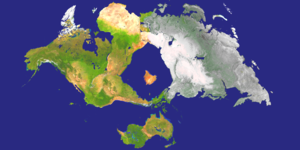 The entire texture of PNF-404. The top half and some parts near the edges are completely unseen in-game.

Although the front of PNF-404 in the area selection screen is visible, there are details on the back of the planet that are completely hidden and unused. This unseen geography can only be viewed by looking at its direct texture.

Various unused maps can also be found in the files.

Some early versions of used maps can be found in the files of Pikmin 3 Deluxe. Most of these maps also have what appear to be textures for radar patterns.

A near-finished Garden of Hope, but with some incomplete elements. It is called mapB_vp internally.[1]

An early version of Garden of Hope can be found in Pikmin 3 Deluxe's files, as well as textures for radar patterns of it. It is called perf_mapB internally. The following changes can be noted:

An early version of The Rustyard exists in Pikmin 3 Deluxe's files.

Completely unique test maps can be found in Pikmin 3 Deluxe's files too, that presumably served to test certain mechanics.

object_00 is a map missing a model, and is only known from the textures for its radar.

enemy_00 is the largest of the test maps, and has two distinct environments, grass and snow.[1]

Nearly all the following enemy data can be found in the /content/CMCmn/enemy, referring to unused enemies.

The following unused enemies exist in the enemies folder, but their model and textures are copies or near-copies of the Pikmin 2 files. They are also roughly the same size they were in that game.

This enemy's data is missing several files: anim_define.txt, cull_info.txt, dynamics.txt, lockon.txt, and params.txt. In addition, it has a panmodoki.txt file which is just a copy of coll_tree.txt. Because of this, no parameter information is known about it.

There are also early versions of Pikmin 3 enemies that aren't identical to their Pikmin 2 counterparts, or are of enemies exclusive to Pikmin 3.

In Pikmin 3 Deluxe, an early version of the Whiptongue Bulborb called arikui_old can be found in the files. It has 11 animations: attack, attack2 (attacking), dead (dying), flick (shaking off Pikmin), move1 (walking), swallow (swallowing), type5 (being carried), wait1, wait2, wait3 (idling), and waitact (shaking off Pikmin while idling).[4] The following is known from its game files: 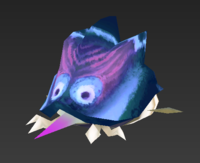 Also in Pikmin 3 Deluxe, an early version of the Flighty Joustmite can be found.

An early version of the Desiccated Skitter Leaf also exists in Pikmin 3 Deluxe.

An early version of the Hermit Crawmad exists in Pikmin 3 Deluxe's files, too. 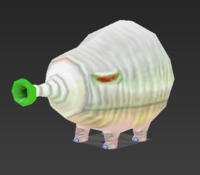 The unused green variant of the Fiery Blowhog.

There is unused AI in the game for a Fiery Blowhog variant that shoots out bubbles. This may correspond to an unused early texture for a green variant of the hog found in Pikmin 3 Deluxe.

kakureimo is a fat leech-like enemy. It has a purple body, yellow stomach along with yellow back stripes, and three green eyes on each side of its small head. Its mouth is circular and filled with jagged teeth, and it has two large antennae on its head. Size-wise, it's around the size of a Bulborb. 隠れ? is the stem of the verb 隠れる? which means "to hide", and いも? translates to "potato", although it is also part of the word イモムシ? (lit.: "caterpillar").

When it spawns, it pops out from underneath the ground. When there are no Pikmin or leaders nearby, it waddles around to explore a small area immediately outside of its "home" , but if one gets into view, it becomes alarmed and dashes to its original spot, where it burrows underground. After being left alone for a bit, it will reemerge and repeat the cycle. Given unknown rules, it may decide to stay underground until it's left alone, or it will cautiously poke its head out to survey the area. When it burrows, its health is entirely restored. Other than that, some parts of the enemy are unfinished, in that it has no particle effects, some animations are a bit jerky, and parts of its logic are missing, in that Pikmin can latch on to it while it buries and continue to attack it, even through the ground. If Pikmin are used to pick up the unused berry bait object and place berries near the kakureimo, the creature will immediately rush toward the berry and "consume" it. This will cause it to temporarily ignore Pikmin until it is attacked or it notices Pikmin again, in which case it rushes back to its original spot and drops the berry.[5]

Given how it acts the same as the moguraimo, it has a similar name to it, and sports a similar color scheme, it's safe to say that the two creatures are somehow related.

From analysis of the game files, the following can be concluded:

This creature bears a strong resemblance to the Ravenous Whiskerpillar from Pikmin 2. The internal name, however, is quite different: it used to be imomushi (イモムシ? (lit.: "caterpillar")), but is now moguraimo (モグライモ? (lit.: "mole potato")). Appearance-wise, it is slightly larger than before, and unless the texture mapping of the model is incorrect, its skin is mostly purple; besides that, its eyes are slightly larger, it has antennae, and its namesake whiskers are gone. In terms of behavior, it acts exactly the same as the kakureimo, save for that it will attempt to eat another berry even after eating one.[6] Given how it acts the same as the kakureimo, has a similar name to it, and sports a similar color scheme, it's safe to say that the two creatures are somehow related. However, due to its striking resemblance to an already-existing enemy, the model may just be a placeholder. The following can be observed from the game's files: 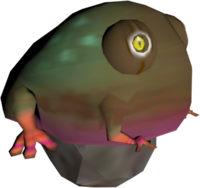 Data for a brown version of the standard Wollywog exists, but with a rock attached to its body. Its internal name is crystal_maro_frog ("Crystal Wollywog"), which implies that the rock is made of crystal. It is uncertain where exactly the rock or crystal would be attached to its body. Besides the coloring, it looks roughly the same as the Pikmin 2 Wollywog. The following can be observed from the files: 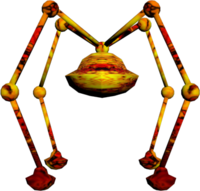 There is a model for the Beady Long Legs as it appears in Pikmin 2, size included, but its circular head is replaced with a large version of one of its feet. Presumably, it would've stomped on the ground using its head as well. With the model are two textures, which are the same as the Pikmin 2 one, but one is tinted blue and the other pink. On the image shown to the right, the Pikmin 2 texture was used for clarity. This creature's internal name is iwadama, meaning "rock orb". The Beady Long Legs' old internal name, damagumo, is used for the Shaggy Long Legs in Pikmin 3. The following can be noted from the game files:

Visually, this enemy resembles a fat Male Sheargrub, and is roughly the same size too. The texture that comes with the model is the same as the one in Pikmin 2. But its internal name, buriko, is the same as the common name for the Swarming Sheargrub in the Japanese release of Pikmin 3, so it is possible it is a prototype version of that enemy. The internal name of the final game's Male Sheargrub name is ujinko_b, and used to be ujib in Pikmin 2.

It moves very quickly, and because of this, it has a hard time catching and eating Pikmin. It cannot damage leaders, and cannot get damaged.[3] Its color mapping isn't set up correctly, so it appears orange when alive, and turns white and purple if defeated with a bomb rock.[7] From examining the game's files, the following can also be noted:

In addition, the unknown and mostly-empty kokgamiegg "enemy" seems to have been made on accident, created instead of the used kokagamiegg (the Phosbat Pod), and tuyukusa is a mostly broken and smaller version of tsuyukusa but written using a different romanization system, the Burgeoning Spiderwort. Finally, the fire geyser has parameter files for a bubble and a gas variant, suggesting the planned return of gas pipes and the addition of water geyser-like hazard obstacles.

The file /content/CMCmn/system/param_db.szs/generatorsave_db.txt has what appear to be respawn day paramaters for the game's objects. Inside the list, one can find the entries GasHiba, which is what the gas pipes in Pikmin 2 are internally called, MureBuka, possibly an earlier name for the Scornet (who in the final version have the internal name Mure) meaning "swarm subordinate", and Tamagumo, an alternative spelling of Damagumo, which is also present in the file.

The following enemies have unused values because they don't appear in Collect Treasure! and/or Battle Enemies!

The following enemies have unused Poko values because they don't leave a corpse, so they cannot be brought back to a SPERO.

The following enemies have unused values because they don't leave a corpse and they don't appear in Battle Enemies!

The following enemies have unused Poko values because they don't appear in Collect Treasure! and don't leave a corpse.

The following fruit have or had unused Poko values because they don't appear in Mission Mode.

The following fruit have unused juice values because they don't appear in Story Mode.

Several songs exist inside the releases of Pikmin 3, but are unused.

There is a "good" version of the end of day theme, much like the ones in Pikmin 2.

Same as above, but a "bad" version.

A file similar to the Side Stories selection theme. It was likely to be used for the planned inclusion of the Pikmin Short Movies, but was unused due to their inclusion in Pikmin 3 Deluxe being scrapped.

Much like in the first game, each Onion was to be found dormant, and had their own "boot up" cutscene.