Pikmin 2 has a vast amount of unused content inside the disc, although most of it is text, cut treasures, and unused models.

A dummy Piklopedia icon can be found amidst the regular Piklopedia icon textures, in the game's files. Presumably, it was used during development to identify enemies with no icon at the time.

Two icons originally from Mappy remain unused. Judging by the internal filename, j2dtest.arc, the initial inclusion was most likely for testing.

Unused icons of a map editor presumably used by the developers for designing the areas. 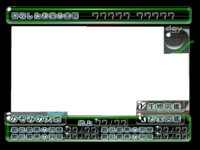 A texture for the preliminary layout of the world map is in /new_screen/jpn/worldmap.szs. The entire HUD was later rearranged and redone, and a blue background was added.

There is a dummy texture in the Waterwraith's model. Its look is created with frame buffer shaders, meaning that this underlying texture is not usually seen.

This texture that combines two textures is used, but in each case it's either distorted or portions of the texture aren't used – the player never gets to see both parts of the texture clearly.

The bottom part of this texture, resembling a drain pipe clogged with grease, is located under the Shower Room's entrance, but it cannot be fully seen because the cave entrance covers most of the texture. It can be seen in the Piklopedia in the same spot, but even then it's warped by the water texture above it and the Piklopedia's bloom filter; not to mention that the level model is actually an almost completely different model.

The top part of this texture is seen on the chipped parts of concrete/tile in the same area, but only portions of it can be seen at a time. In the two cases where it's facing upwards, the middle section is normally covered by a metal pipe. In the other case when it's used in the crack in the Shower Room's entrance, only a quarter of it is used, and part of it's at an extremely narrow slant, making it hard to look at clearly.

There is a single unused level in Pikmin 2, titled newtest. It has a Piklopedia version in another file, which is missing the section of the map with footstep sounds. It has multiple unused layouts in /user/Abe/map/newtest/nonloop, three of which specify enemies that are planned to spawn in certain areas, as dictated by a "readme" file found in the same directory. It seems to be a test map, based on its title and its contents, which include organized slopes, water, and clusters of enemies and objects. It overall has a basic, flat garden environment similar to the Perplexing Pool.

A large amount of unseen geometry can be seen out of bounds in most areas through hacking in Pikmin 2. In most cases, this indicates usage of a copy and paste feature on the modeler's modeling program, although in some cases, it implies slightly different area design at one point in development.

An unused readme.txt found in /user/Abe/map/newtest/nonloop indicates that the layout files for newtest found in the same directory as the file likely specify which enemies are to spawn in certain areas.

Curiously, 2-2.txt specifies that an enemy with the ID of 39 would spawn in the Awakening Wood. Attempting to spawn the enemy with the ID of 39 crashes the game, as it does not exist. Additionally, the file for the Perplexing Pool, 3-3.txt is absent. All of the objects placed in these layouts are in sloppy rows, so they are not early layouts of areas. It is unclear which of the enemies listed spawned in caves or the overworld.

Stretches its neck to look for prey. When it finds Pikmin, it gobbles them up instead of chasing them.

An unused Treasure Hoard entry for an unknown treasure.

Unused text, apparently test messages. The last seven messages appear to be titles of unknown test areas in radar screens, as the title shown for newtest in the radar is "Test Area (ID 8394_03)".

All content in Pikmin 2 has internal names that cannot be seen in-game, like unused text. The naming of these files sometimes contains leftovers or hints to cut content early in development:

Other unused songs include:

Much like in the first game, each Onion was to be found dormant, and had their own "boot up" cutscene. The Red Onion has a textbox that automatically closes itself as the textbox points to a message that doesn't exist.

A cave entrance leading to an unused cave exists in the Perplexing Pool just to the right of the Red Onion's landing site, but only on day 1. It is completely impossible to get to the Perplexing Pool on day 1 without hacking. This cave is known as caveinfo internally, and is composed of earlier versions of sublevels used in other caves, with some sublevels with unique layouts being totally cut from the game and remaining here. It has 34 floors and uses the Petrified Heart, Regal Diamond, and Tear Stone as placeholders for treasures in most of its sublevels.

The caves are made up of randomly laid out map units (located on /user/Mukki/mapunits/units, with each sublevel having a specific one. These units are unused:

Caves are made out of multiple cave units, each with their own exit points. The game then connects these units during sublevel generation by connecting exit points. Some cave units have exit points that are useless in sublevel generation, because the resulting sublevel is always the same in-game, showing no randomization. This is because every time the sublevel is generated, it can only ever use the same cave units in the same way, so these rooms always have the same dead-end units connected to them. In addition, there is a property that controls the corridor-to-room ratio, with 0 resulting in only dead-end units spawning and no corridors, and 1 being lots of corridors connecting exit points. Where these cave units appear, this ratio is set to zero, so corridors cannot generate, resulting in the only thing to connect to them being the dead-ends. This would be functionally identical to a sublevel using a single cave unit with the dead-ends as part of the model. Shown below are the cave units where this issue arises:

Of special note is the last sublevel of the Dream Den, which can actually show randomization in the sublevel visuals, since there are two different dead-end units that can be used for that sublevel. Normally, all of the player's attention gets diverted to defeating the Titan Dweevil, carrying back the treasures, and exiting the cave, instead of the type of dead-end unit used when the sublevel was generated.

Probably used for the Hole of Beasts at one time in development. Jyoou translates to queen.

Sirohana translates to white flower, so these lighting settings may have been used for the White Flower Garden.

While muraon_light files 1-2 and 4 are used, these variants are not.

A slightly lighter version of the lighting used in the Snack Pit, whereas the final version uses key_light_lv1.ini.

These lighting files use an earlier format than the others, so the only way to get these to work right is to import the RGB and light settings into a different file. It's possible that these settings were meant for Olimar and Louie, who would light the caves with their tracking beacons. Or they could just be test files.

Interestingly, a slightly modified version of this leader-specific light casting was used in Pikmin 3, albeit with an added alpha channel with bumpmap-tracking to reduce the intensity of the color based on where the leader is standing.

There are some unused treasures in Pikmin 2's game data. Some of them include the discs for Japanese Nintendo GameCube games: Pikmin, The Legend of Zelda: The Wind Waker, Luigi's Mansion, and Super Mario Sunshine.

The Japanese version of Pikmin 2 has e-Reader compatibility. Although this was removed for the overseas versions of the game, the menus are still present in the game's files.