Hey! Pikmin has a substantial amount of unused content inside its data, mostly coming in the form of unused enemies. 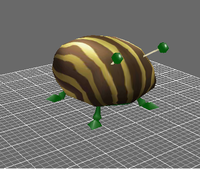 This enemy is the Doodlebug from Pikmin 2. Its Japanese name is the same as in Pikmin 2, being called Onarashi. This enemy has a few animations, which include walking, running, and being idle. Because many of the items this enemy drops in the previous games aren't in Hey! Pikmin, it was probably planned to drop Sparklium Seeds.[source needed] 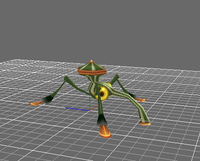 This enemy is the Skeeterskate from Pikmin 3. Its Japanese name is the same as in Pikmin 3, being called Mizunbou. Appearance-wise, it is very similar to the Pikmin 3 version, only with bigger eyes, more suited to Hey! Pikmin's cartoonish style. The model itself is very complete, being fully shaded, with various animations. These animations include skimming, presumably on water, back and forth. It also has an animation for attacking, in which it spits water, causing its water sac to deflate. Interestingly, the Skeeterskate's legs appear to clip into its eyes.[source needed]

This enemy is the Scornet from Pikmin 3. Its Japanese name is the same as in Pikmin 3, being called Hatisuzume. This enemy has a slightly different appearance from the Pikmin 3 one, such as having blue eyes and different coloration. This is probably just made to fit the game's cartoony art style. This enemy has two animations: one labeled "wait," in which the Scornet flies in place, and another labeled "walk," in which the Scornet charges at something, flying slightly faster. It was probably replaced by the Sparrowhead, which has very similar animations of waiting in place and charging, and it even overall looks similar.[source needed]

This enemy, internally called Big Mukade, simply appears to be an early version of the Adult Centipare. It comes in various colors, similar to the final version of the creature.[1] 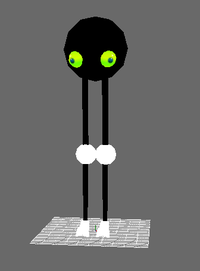 This appears to be some kind of test enemy, as its refereed as such in its animations files. Due to having animations very close to the Elongated Crushblat, it was probably used to test its animations. This is supported by its name, which translates to "big bird". It also could've been a dummy model for the creature, serving as the basic idea before its detailed appearance was decided and modeled.[source needed]

This enemy, simply called "enemy01" in the game files, was most likely an enemy created for testing purposes. It comes in 7 variations:

This enemy appears to be just a test enemy. It has two separate "models": eyes, which have no animations, and wings, which have 1 animation, for flapping. Both are flat textures. Its two models look like polished versions of Enemy03, which is strange, since its name suggests it was made before it.

This enemy appears to be some kind of bee. It has several models and textures: 3 eye textures, which include angry eyes, presumably used when attacking, and "normal" eyes, which include a big and small variety. It has a yellow body with purple stripes, and wings that are also fully modeled. The body has two animations: one for attacking and one for "waiting". The wings have one animation, which is flapping. Finally, it also has some kind of fuzzy texture on its bottom, very similar to the Spornet, which may imply this was an earlier version of that enemy.[source needed] 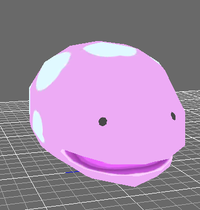 This enemy appears to be the Enemy01's dot eye variation without legs. It only has one animation, which is opening and closing its mouth.[source needed]

This is likely a prototype of some sort of Bulborb, as "Chappy" is the Japanese name for the enemy, and "proto" is likely just short for prototype 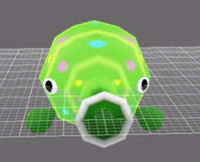 This enemy probably belonged to the blowhog family. This is supported by its name, which could translate to "ball tokkuri", similar to the family's Japanese name. It has animations for blowing air, presumably to blow away Captain Olimar and his Pikmin. It is lime-green with colorful pink, blue, and yellow spots, almost resembling candy. Besides these spots, it is completely translucent, contrary to the blowhogs in the final game. It has white lips at the end of its snout, and has a shape almost identical to the Puffy Blowhog, though with no spikes on its back.[3] 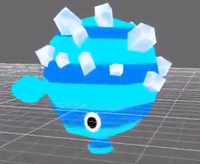 This is a blue-striped creature, with crystals on its back. Its internal name can also be crystal, a translation of suisyo. Its shape specifically resembles a Withering Blowhog besides the crystals. It may have a relation to the Maridokuri since they both resemble blowhogs and are one of the only transparent enemies in the game.[4] 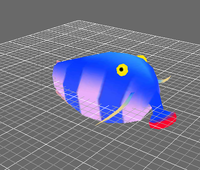 This enemy, whose internal name is Namazu, meaning "catfish" (part of the Water Dumple's name in Japan), appears to be some kind of aquatic blowhog. To back this up, it is transparent, similar to the previous unused blowhog enemies. It has several animations, which include; flying or swimming around, charging at something, presumably the player, and sucking something up, presumably Pikmin.[source needed]

This enemy appears to have been scrapped very early on. It consists of only a basic model, with a red head and blue body. It also has no animations. It appears to have been some kind of mockiwi, as its name translates to "wing makky", with マッキー? being the Japanese name for the Mockiwi.[source needed]

This is presumably another type of mockiwi. Its name translates to "slurping makky". It has a duckbill, a white body, and a brown face. Besides the duckbill, it highly resembles the Whiptongue Bulborb, especially its coloring. Also like its grub-dog counterpart, it has a very long tongue that was probably planned to be able to catch Pikmin. It only has some animations, and not nearly as many as the mockiwis seen in-game. Some of them include walking and using its tongue.[5] 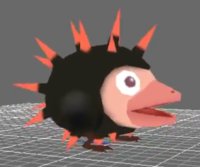 This is presumably another type of mockiwi. Its name translates to "thorn makky". It has a black body and spikes with red tips. It has a presumably complete animation set, contrary to the other unused mockiwi-like enemy. Every animation of Mockiwis in the game is replicated by this creature, even ones exclusive to special instances in cutscenes (like one looking down, and being surprised). It also has a polished model, with shading that is absent in most of the unused creatures. Because of its near completion, it was likely scrapped late in development. It can be assumed that it wasn't planned to be able to be killed with most Pikmin, judging by how Pikmin die from the spikes of Speargrubs. However, Rock Pikmin are resistant to Speargrubs, so they may have been resistant to this creature as well.[6] 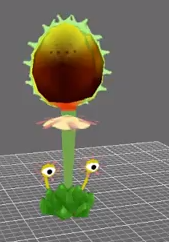 This enemy heavily resembles the Creeping Chrysanthemum, and probably belonged to the chrysanthemum family. However, it can be told that it is not the same creature as in Pikmin 2; it has an entirely different coloration, it has a different method of attacking, and it has a different Japanese name, with ビックリ菊?, lit.: "Surprising Chrysanthemum" being the Japanese name of the Pikmin 2 creature, and this creature's name being "pikutabe", meaning "Pikmin eater". The internal name of the Creeping Chrysanthemum is different as well.Pikutabe has various animations, which include popping out of the ground, attacking the player and going back underground. Because its mouth has a strange transparency to it, and it only has a few animations, this enemy was likely scrapped relatively early in development.[7] 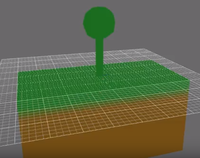 This enemy is similar to the hydroe bramble, and may have had a similar function, as its name translates to "hole blocking tree". It appears to have been cut early on in development, as it only has 4 animations in total, and the model has no shading at all. The model includes what seems to be a simple green base when loaded, and the ball opens up to reveal teeth.[8] 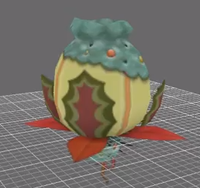 Hokori is a plant-like object, and at first glance may resemble a Candypop Bud. Since it has minor parameter data, it can be inferred it was one of the last and most complete objects cut from Hey! Pikmin. It has a few animations, such as spitting something out, and an animation of it deflating slightly, called mo_hokori_damage_01a, implying it is for when the plant gets damaged. However, these animations are quite different from normal Candypop Buds; it is quite clear it was to spit out a large projectile, contrary to any candypop buds in the series. Its appearance is also significantly different than any buds seen in the previous games as it has orange leaves and a gray top, whereas most of these flowers are all one color. A strange fuzzy thing can be seen under it with a similar texture to its top, possibly serving as a stem.[9] 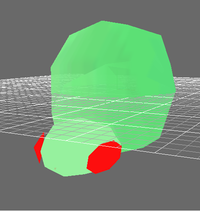 This enemy looks similar to the Grabbit, although it also resembles scarpanids, creatures that are usually green with red eyes. Its name could translate to "nut stealing", meaning it may have been intended to steal Sparklium Seeds. However, it's hard to tell because of its unfinished model. It was likely scrapped early on, as it has no shading or animations.[source needed] 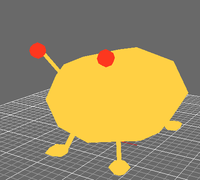 This enemy appears similar to an Iridescent Glint Beetle without its shiny texture and polished look. It appears to have been scrapped early on, as it has no animations and no shading. As its name can translate to "nut holder", it was probably planned to drop Sparklium Seeds.[source needed] 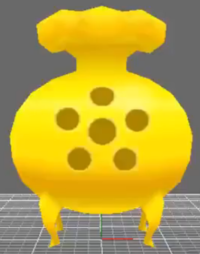 This appears to be a smaller version of the Stuffed Bellbloom, with its knot is on its head, almost looking like a cauldron. Its Japanese name is the same as the Stuffed Bellbloom minus the word オオ? (lit.: "big"), being called suzunari. It has animations for losing seeds, jumping, hitting the ground, and being attacked. All of these animations match up near perfectly to those of its bigger relative. However, there is one animation that seems to be of the enemy swimming and paddling its legs, something that the Stuffed Bellbloom can't do.[10]

Coguchi has very few animations. These include attacking with its huge mouth, rushing towards the player, and being idle. It has two textures, one for its body and one for its large pupil. Its animations and appearance have a striking resemblance to the Puckering Blinnow in that game, so it was likely to be in the elips family. It has an even more elongated mouth, slightly resembling a swordfish. Its name translates to "small mouth".[11] 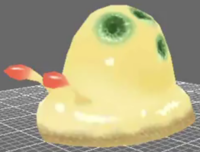 Gareki is an enemy that resembles a real-world snail. It has a yellow-orange body with four large green holes on a hump which is comparable in shape to the shell of a real snail. It also sports red eye-stalks, making it even more snail-like. Although its texture and shading seems complete, it only has a few animations; all of them moving forward.[12] 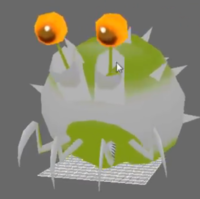 Herculeseboshi is an enemy that resembles a real-world crab. It has a green-gray body and shiny orange eyes resting within eye-stalks. It slightly resembles a Mitite. It was likely to have served as a boss, as it has many diverse animations. One animation even resembles the Emperor Bulblax when it swallows a bomb rock, so it may have had a similar battle. Adding onto this, its walking animation seems to be as if it is turning and not moving forward, just like how the Emperor Bulblax behaves in the game. It is capable of moving its eyes inward and outward from the stalks that hold them. Its model seems to be quite unpolished, even compared to other unused enemies, as besides its eyes its texture only consists of two colors and barely a transition, green and gray. Its eye-stalks and some other parts of its body are also paper-thin with just a few polygons.[13]

This unused enemy is found in the Spiny Coppeller's files. As such, it is possible this was an early version of the creature, or alternatively, this enemy was meant to accompany it.

Within various files, some unused variants of enemies are found. These are:

In the files, various enemies have earlier unpolished models labeled "alpha". These are: