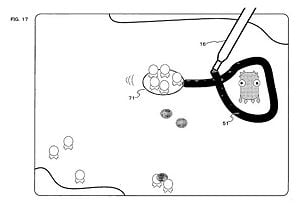 An illustration used in the patent

"US7762893" (also published as EP1716897A2, EP1716897A3, US20060252531) was a design concept for a touch-based strategy game highly resembling the Pikmin series on a device that bears a remarkable resemblance to the Nintendo DS.[1] It was filed as a patent in January 2006 by Yuji Kando and Yutaka Hirameki[2], who respectively are the main programmers and level designers for Pikmin and Pikmin 2.

According to the patent, gameplay would involve players controlling Pikmin-like characters with a "pointing device", with the objective being to guide these units to other objects so that they can interact in certain ways.[3] These objects include "flowers", "food", and the "dead body of opponent". The creatures were to bring these to a "base", similar to bringing pellets and enemy corpses to Onions in the Pikmin series. It also mentions how the creatures can be joined in an array, just like Pikmin squads. If these creatures interact with one of their own outside the array, it will join the group, similar to whistling.