Some parts of Pikmin 2 were only available before the final release, and have been changed or removed for the final version. This information is known from different sources, like gameplay videos or screenshots of earlier versions of the game. Although the exact versions are not known, they are commonly called "beta", "alpha", or "pre-alpha" versions by fans, depending on how complete the game looks to be.

There is also some unused content inside the final copies of Pikmin 2, and some of it helps understand what type of content was meant be available for the full game; for such a list, see the unused content page.

Interestingly, the official website for New Play Control! Pikmin 2 at nintendo.com has some images of the game, but none of them belong to the final release of New Play Control! Pikmin 2. Instead, they show early versions of the GameCube version. From these images, several different features can be noticed, and it can be concluded that they were taken from two different development versions: one that uses graphics and ideas still from the first Pikmin game, and another that is close to the final version of Pikmin 2, but with some differences. This list explains the main differences between the two versions mentioned and the final game:

Several screenshots of the game made by IGN exist[1], and they show content that doesn't exist in the final game. Most of these screenshots are of the introduction cutscene, with the rest being screenshots of gameplay. It is likely that the version shown here is the January 2004 Japanese Demo Disk version, given the presence of the Ranging Bloyster in the Perplexing Pool. The following is a list of notable images, along with their differences from the final game.

Screenshots of the game made by 4players exist, and can be found on their website. These screenshots range from pictures of early development to pictures taken close to release. Some of the screenshots appear to have subtitles added in. 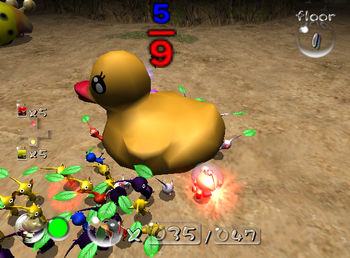 A large yellow bulborb, on the top-left corner.

Two bulborb subspecies are known to have been cut from the final versions of Pikmin 2, from analysis of gameplay videos and screenshots. These bulborbs, along with the basic Bulborb, would have given each basic Pikmin type a bulborb of the same color, had they not been removed. Naming used in the game's data makes it clear that these enemies eventually became the Dwarf Orange Bulborbs, Orange Bulborbs, Snow Bulborbs and Hairy Bulborbs in the final game.

A blue "dwarf" bulborb is clearly seen in a gameplay video.[2] It has white spots, and apparently acts like the Dwarf Bulborb, with the same health, attacks and weight. Its treasure value, however, appears to be

× 5, whereas dwarf bulborbs are worth

Yellow bulborbs appeared in the same video as the blue one, but in an above-ground area that bears a striking resemblance to The Forest of Hope. A dwarf version was also seen, which seems to walk slower than other dwarf bulborbs. In the final game, Snow Bulborbs are internally called yellowkochappy and Hairy Bulborbs are called yellowchappy.

The noted differences from the final game are:

The following differences from the final game can be spotted:

The following differences between the Awakening Wood can be noted:

Interestingly, the presenter erroneously calls Olimar "Omar" and believes Louie is his wife.

The following differences can be noted:

This video was found on a demo disk released only in Japan and is dated January 2004. The level design and object placement indicate that this might be a slightly later version of the game than the one shown in the E3 2003 Challenge Mode gameplay, where most of the game's mechanics, engine, enemies, and concepts are finalized, but not the progression of the game nor the area models.

The following differences from the final game can be spotted:

A trailer shown at E3 2004 shows little noteworthy information, except for the fact that Red Pikmin and Blue Pikmin were also able to enter the Lost Toy Box.

YouTube link (the Pikmin appear 50 seconds into the video)

The first Japanese trailer shows an Emperor Bulblax eating Pikmin with a swipe of its tongue. Only eight Pikmin get caught, even though the cap is nine Pikmin in the final game. It is not clear if the attack in the clip simply failed to gather the maximum number of Pikmin possible, or if the maximum used to be eight, but was changed to nine.

YouTube link (the Emperor Bulblax appears 52 seconds into the video)

The Piklopedia and Treasure Hoard versions of the areas have carrying paths used in the Pikopedia for path-following enemies like the Spotty Bulbear and the Waterwraith. On top of that however, they're designed strangely with one-way points leading into walls, down from cliffs that any leader or grounded enemy couldn't reach, or converging toward sections of the map, which hints to earlier layouts of the areas playable in the final game. These are probably the version shown on the January 2004 Japanese Demo Disk. 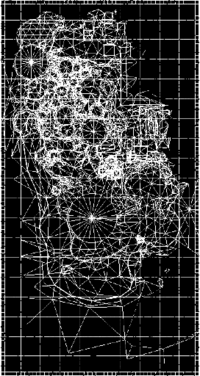 In the background of the Piklopedia and Treasure Hoard menus, there is a wireframe texture that depicts the Perplexing Pool seen from above. This wireframe does not match the final Perplexing Pool, but is fairly close to the Piklopedia/Treasure Hoard version of the area. Notably, the landing site is a large circle instead of a large concrete arena.

That said, there are still differences between the texture and the Perplexing Pool model used in the final game's Piklopedia. For one thing, any artificial objects such as the entire shower floor section where the Shower Room and the random large objects strewn around the landing site are completely missing. The texture also shows an island(with a high polygon count presumbly, as it is almost completely white) to the southeast of the landing site where no such island exists, and has a big open space at the south; these are like remnants from The Distant Spring. The Yellow Pikmin site seems to have walls, but this is unclear. A ramp to left of the landing site that is present in a prerelease screenshot is also present. Finally, most of the out of bounds areas seem to be heavily unfinished. 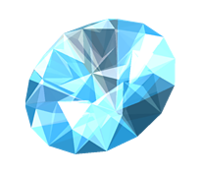 The prerelease version of the Regal Diamond.

In the Official New Play Control! Pikmin 2 website, there are some pieces of artwork for a handful of treasures. Among them is the Regal Diamond, but it is colored light blue, as opposed to the gray coloring in the final game.